A Morning with The Devil (by Brian Patteson)

The Devil, you ask?  Well, several months ago we were contacted by Adam Brown and Aaron Straight who are narrator and producer/director, respectively, of a film in the works called "Save The Devil".  The "devil" in their film is the "Diablotin" which most birders know as the Black-capped Petrel.  Black-caps get the name from the scary sounds they make at night around their nesting sites.  Many of these sites are in Haiti, and the degradation of the natural environment with its catastrophic consequences for the people there and the Black-capped Petrel will be addressed in the film.  Because the "Diablotin" actually spends most of its life on the open ocean, Adam and Aaron have been keen to get some quality at sea footage of Black-capped Petrels in the Gulf Stream.  I suggested a fall trip because we would have better looking birds that had completed wing molt.  Also, the odds of getting some northeasterly winds for front-lit morning birds, I figured would be best in September or early October.  Well, various circumstances prevented going then, so for the last few weeks, we have been waiting for the perfect morning to do the shoot.  Fortunately, we have a highly skilled and enthusiastic film maker, Nic McLean, living just up the beach in Kitty Hawk. 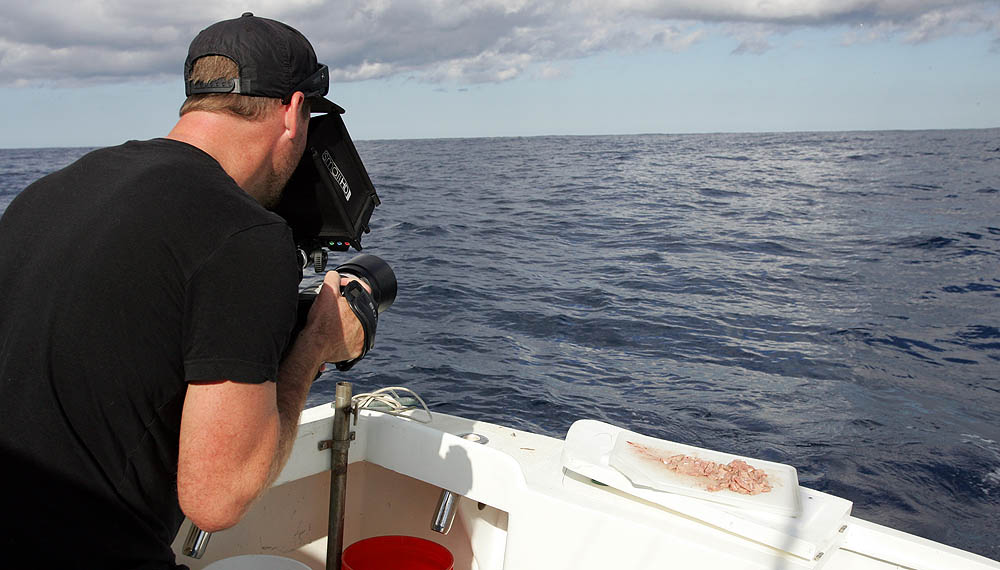 Nic and I have been in touch for weeks, looking for the ideal conditions and when he would be available to drive down and jump on the boat.  Finally it looked as though Saturday November 8th would be just right.  It was windy on Friday from the northwest, which is a good direction for Black-caps in waters south of Hatteras, but too rough to shoot the footage.  Saturday, it seemed, would be sunny with just a light north wind going to the east and just enough swell for the birds to fly on if the wind fell out altogether.  And...the weather forecast was right on!!

So we left Hatteras at the crack of dawn and we were looking at our first Black-capped Petrel before 8:30am.  It took a while to get a number of them to the chum, but for over two hours, we were surrounded by a modest number of sharp-looking Diablotins that made many close passes to our trusty little vessel, the Skua.  We opted to take the smaller boat because - day in and day out - we get closer looks at the more skittish seabirds from a lower profile boat.  And when it comes to videography, close birds are definitely a necessity.

I must admit, during the time between our first sighting and the first close "shootable" Black-cap, I was a bit worried that I had made a mistake by going out following a bright moonlit night.  But as soon as we got the first feeding Black-capped, a Pomarine Jaeger, a few Wilson's Storm-Petrels, and a few gulls, it was good steady action in the slick, drawing Black-caps from all around.  We were lucky to have some shark liver provided by the fishermen on the Little Clam just a few days ago, and that, along with our fish oil and frozen chum, was just the right recipe for the birds.

Then show was over by 1100 and we worked back in closer to the shelf break, but there was not much to see bird-wise.  We did see a single Audubon's Shearwater, but no Cory's.  There are usually a number of Cory's around in November, so this was a little surprising.  Since we had done what we set out to do, there was no need to stay out all day, so we headed back to shore.  There were good numbers of gannets around the inlet, which is a reminder that the winter seabirds should be on their way soon.  We have several trips planned for Winter 2015 (please click for a link to our website page with the dates!).

We have also been talking about doing some "extra" winter trips on the smaller boat when the conditions are right for it.  We call these "make-up" trips because the plan is to make up a group with people from a pool of interested parties when the weather is good to go.  These trips are an especially good fit for birders who want to photograph the birds extensively.

I have been photographing seabirds for many, many years and what used to be a very difficult, frustrating and expensive endeavor is now much more rewarding because of the vast improvements in the equipment over the last couple of decades.  The advent of high quality digital SLRs has changed everything and now you can blaze away and shoot many thousands of photos for a one time investment.  During the winter, we have lots of big birds close to the boat, so a super-telephoto lens is not necessary for great results.  And other wildlife, such as dolphins, sea turtles, and Manta Rays also make interesting subjects.

Most days I don't take very many photos, but I love to do it when the light is good and the birds are close.  I was pleased to get some nice images of Black-caps and the Pomarine Jaeger on Saturday.  I was using a Canon 7D and a 400/4.0 lens, which is new to me.  In the past we have had very good success with the Canon 400/5.6 prime and the 300/4.0.  The key to good flight shots, of course, is accurate focus and a high shutter speed.  Back in the film days, 1/1000 was my minimum but I think 1/2000 is a better standard these days with the digital "crop bodies".  Image stabilization cannot freeze the motion of the subject, so a high shutter speed is needed if you want to stop action.  Of course, with seabirds it is helpful to see the bird in motion, so now that has us thinking about what we need to get good video of all the birds we see, especially after having Nic on the boat, shooting Diablotins - in slow motion!  We'll see what happens.

Following are photos that Brian took Saturday of Black-capped Petrels and our attentive Pomarine Jaeger! 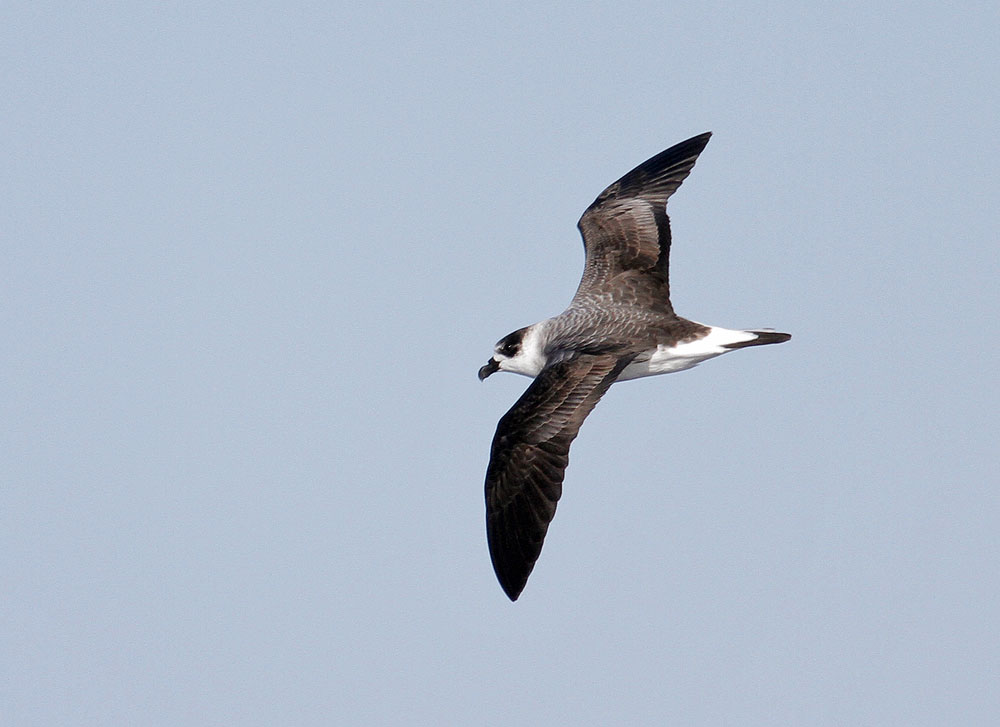 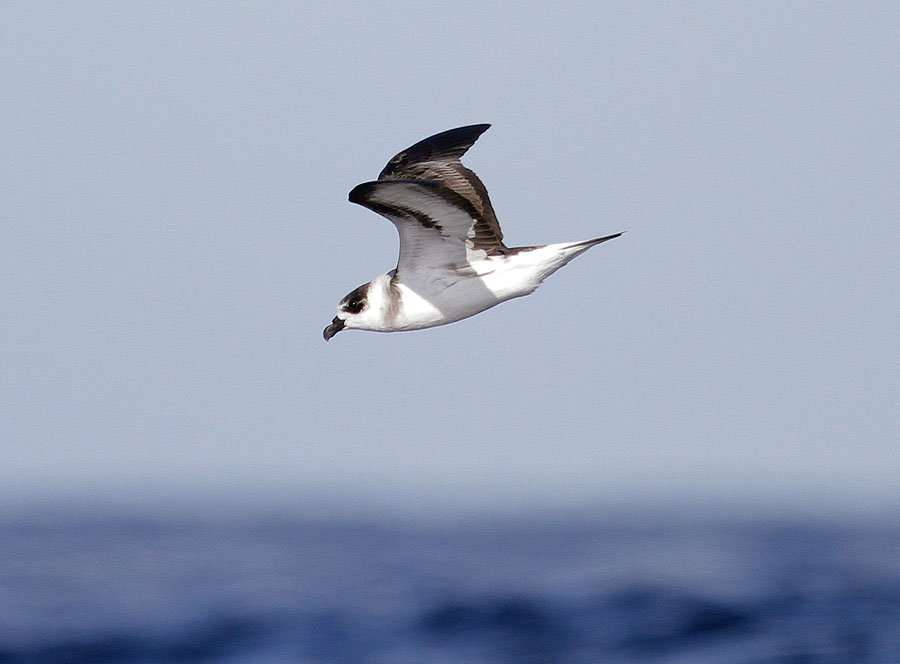 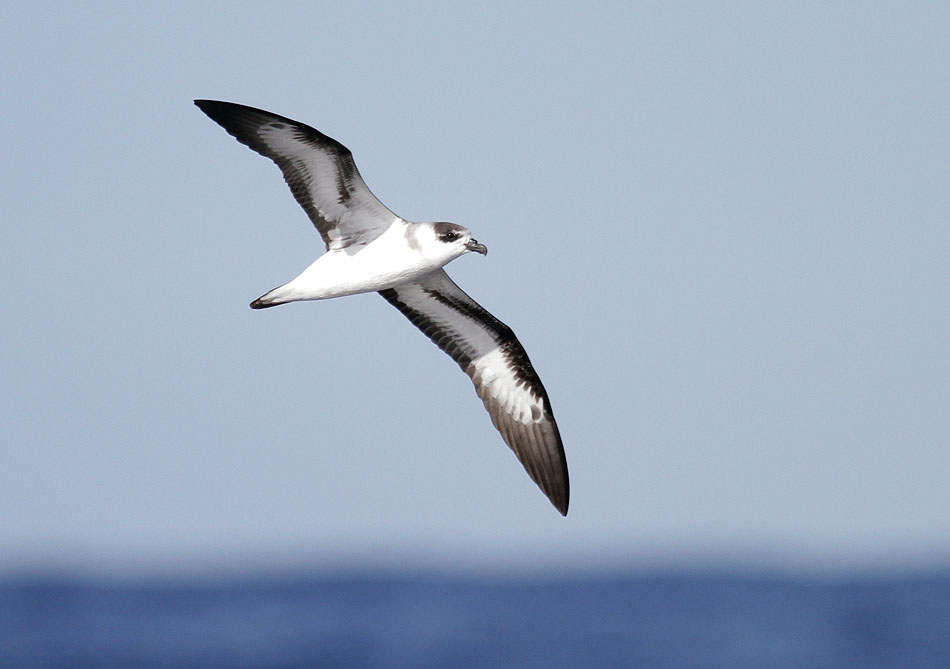 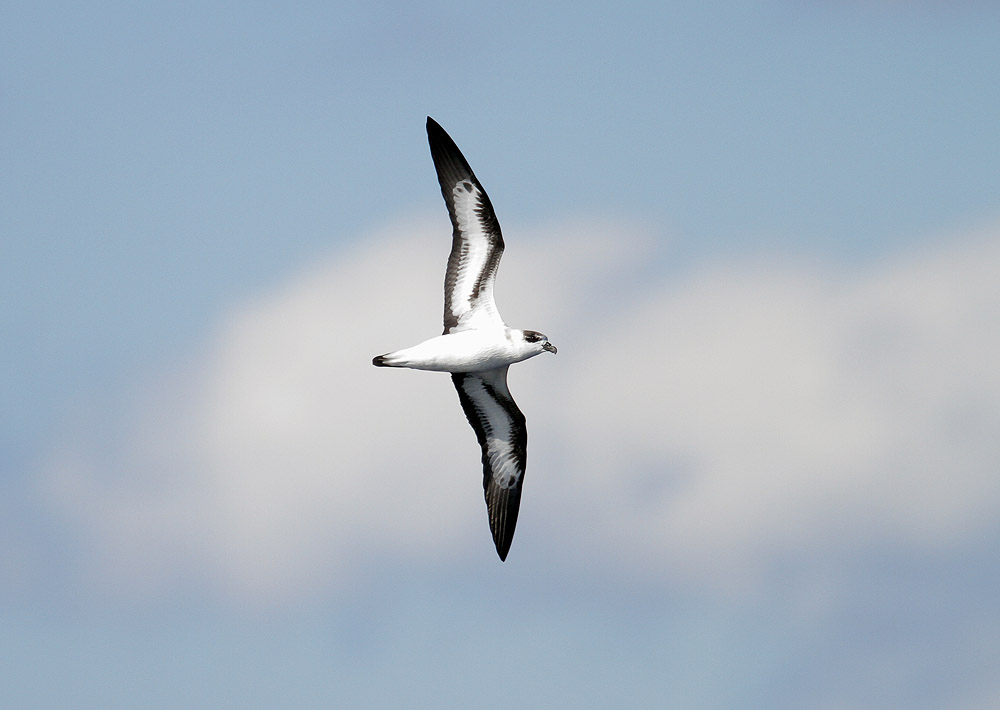 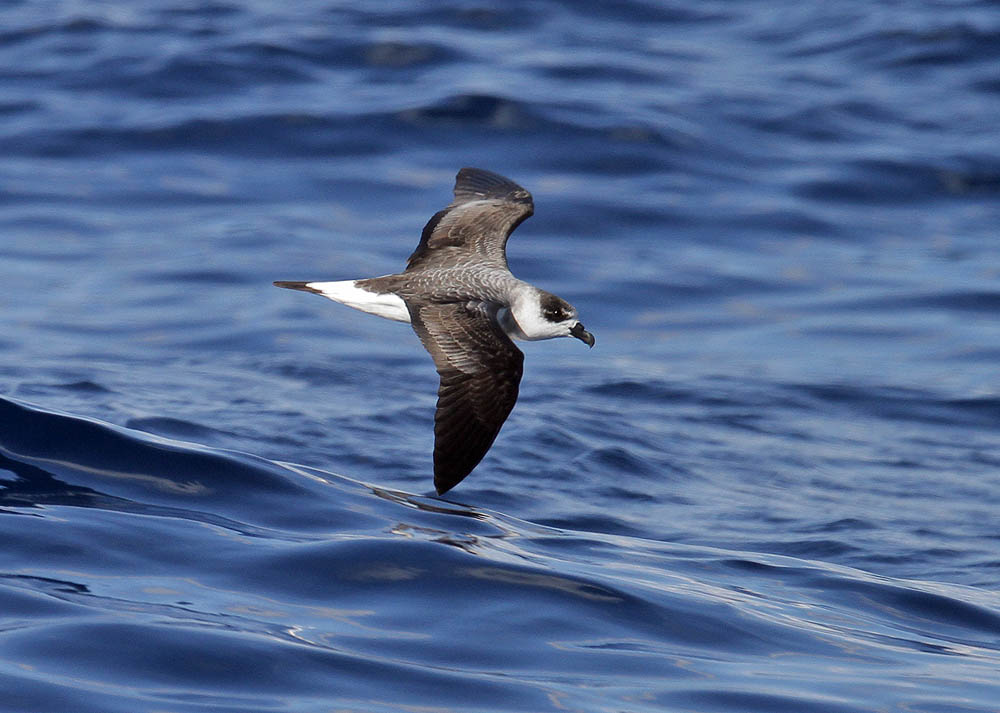 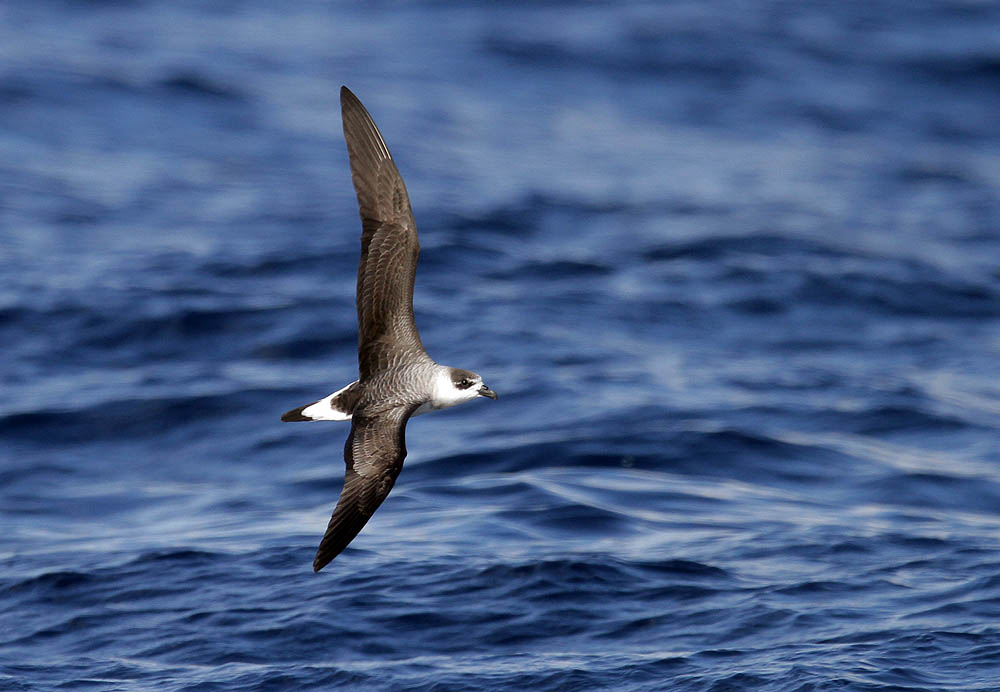 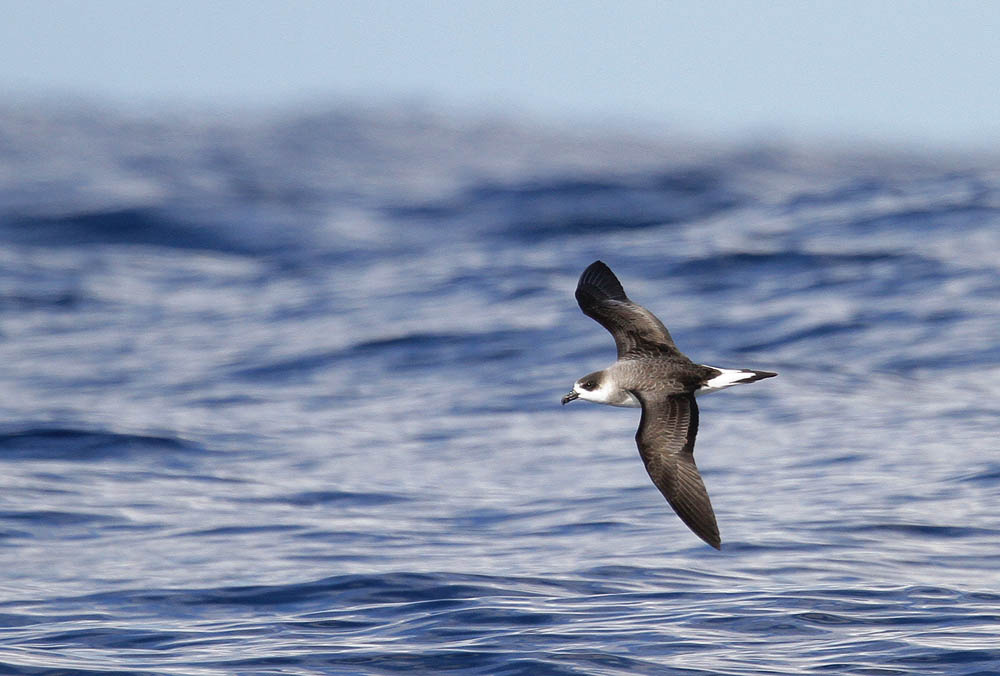 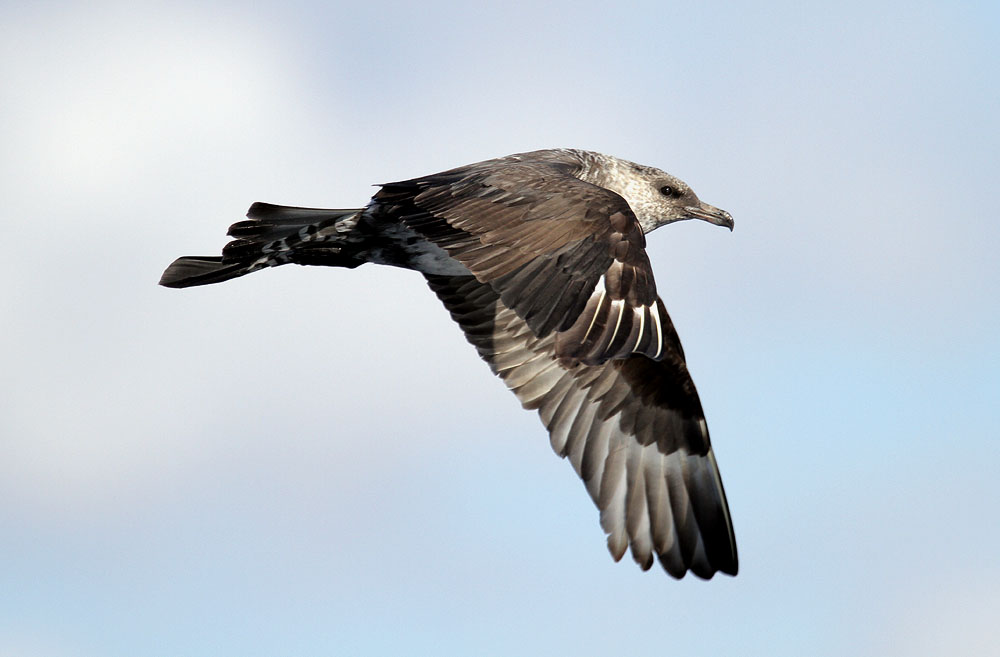 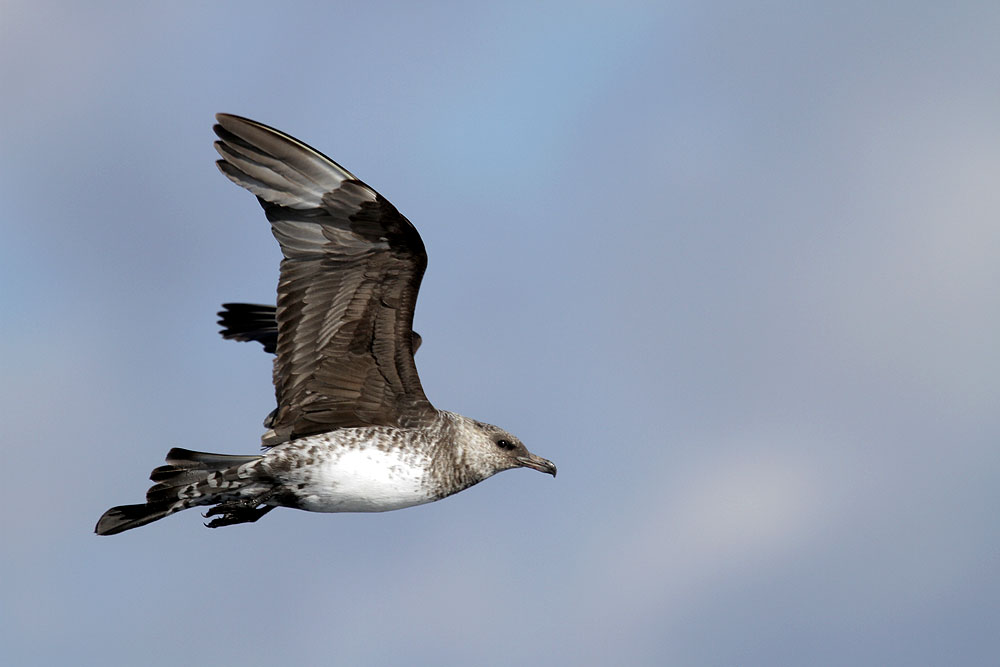 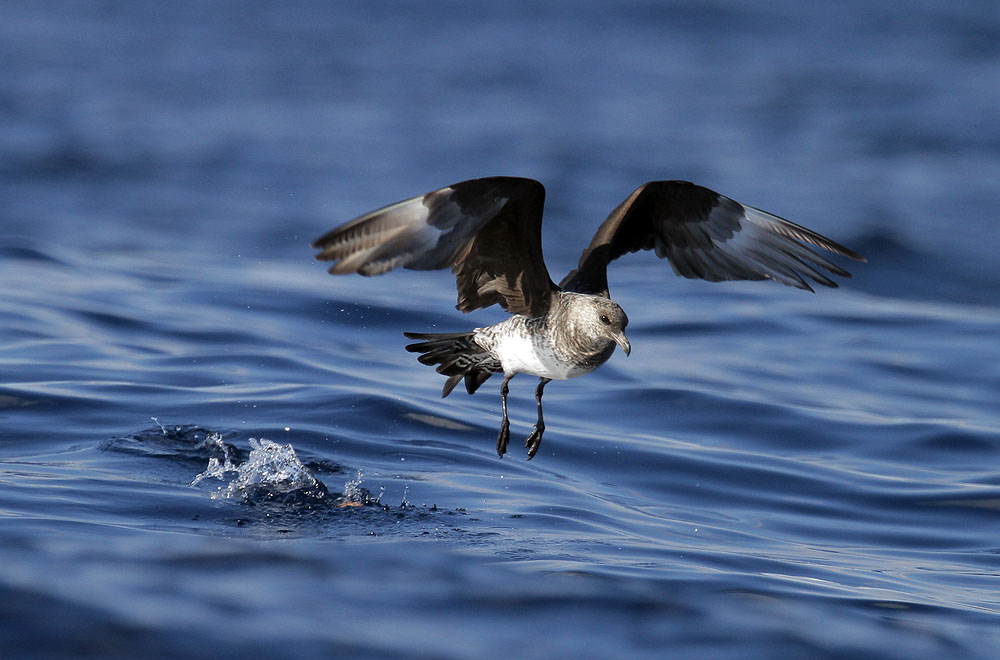 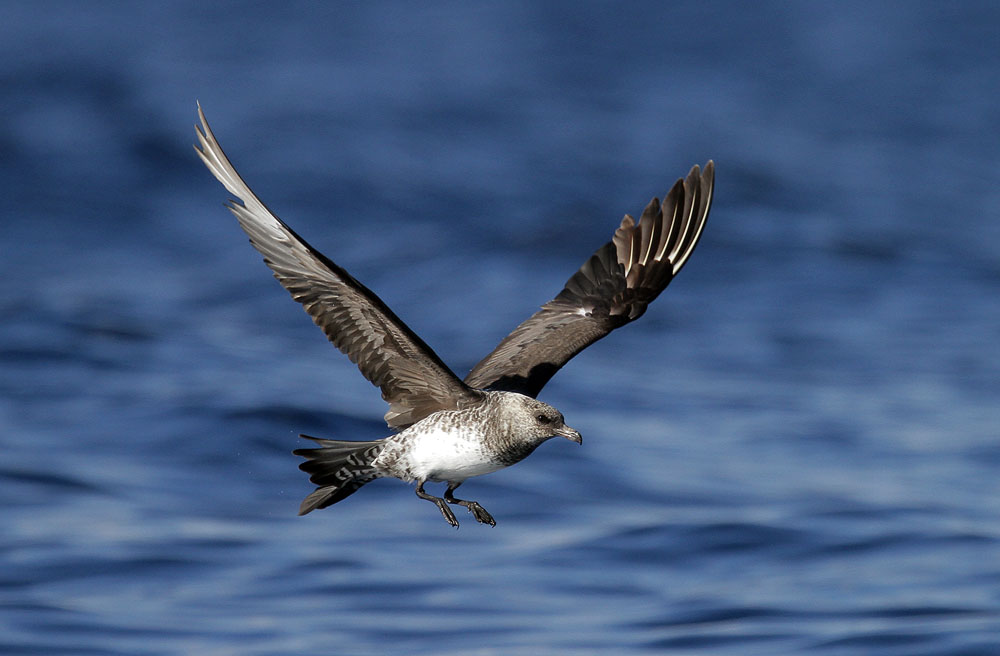 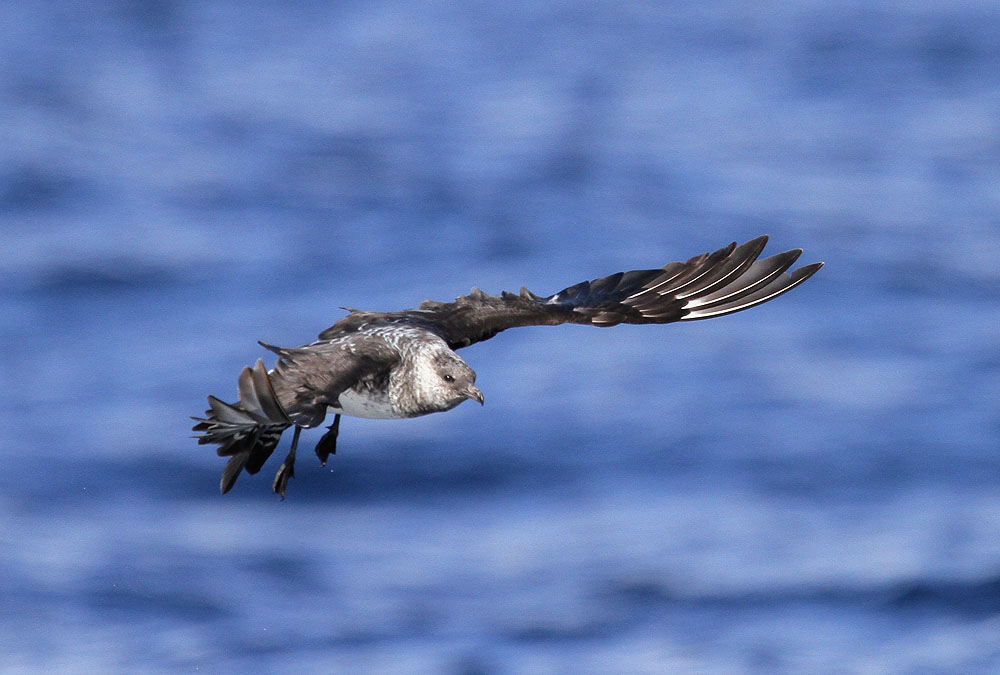 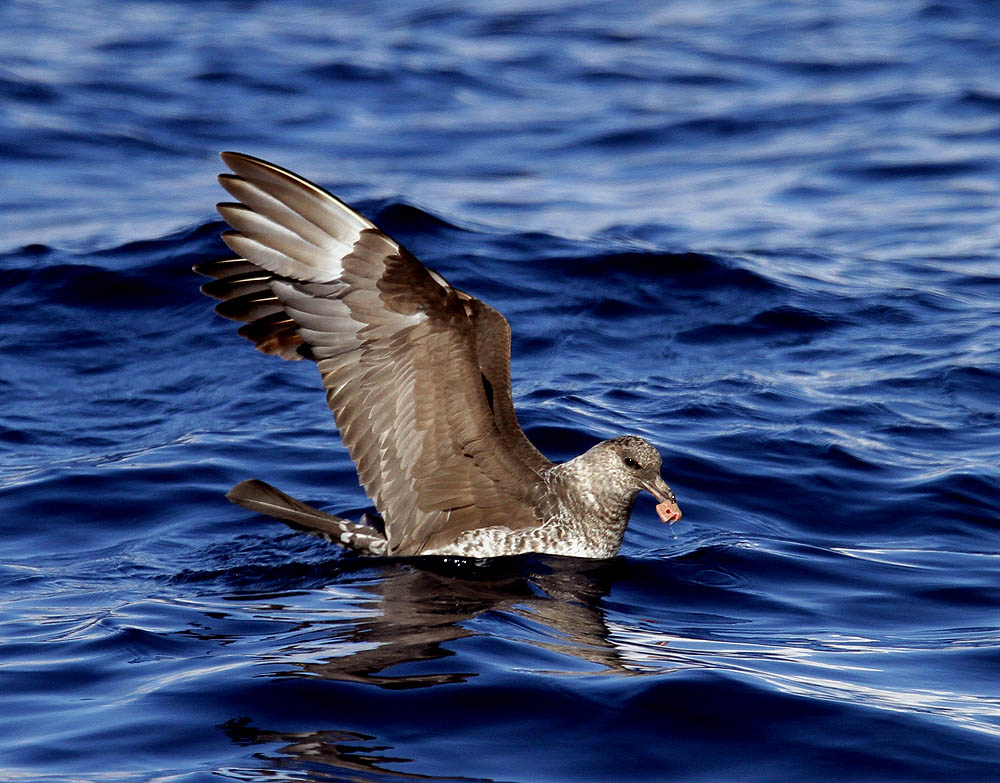 Posted by Kate Sutherland at 8:38 PM No comments: