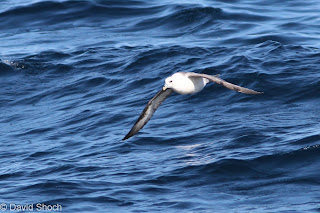 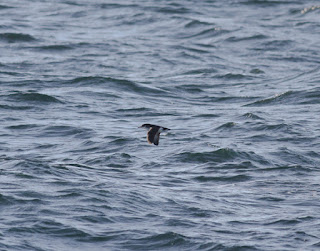 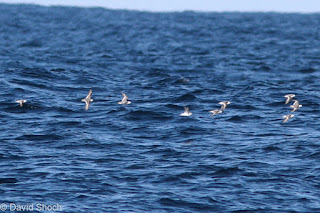 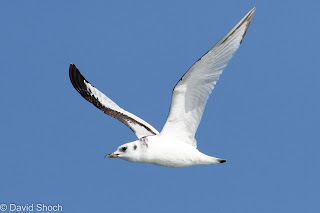 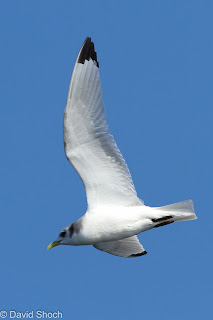 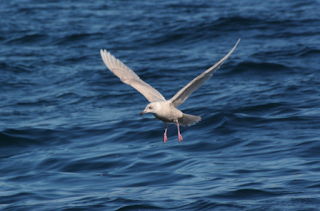 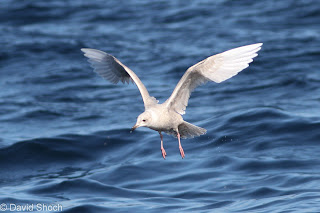 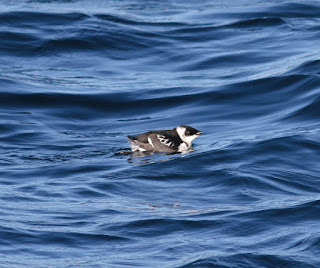 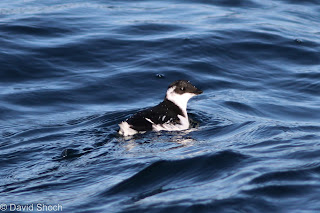 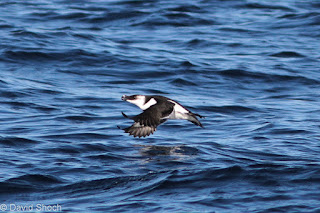 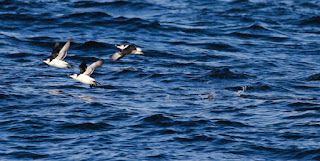 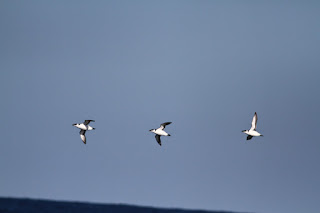 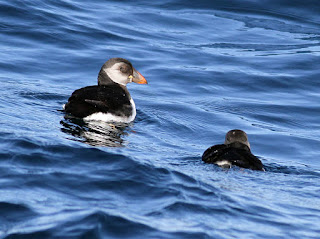 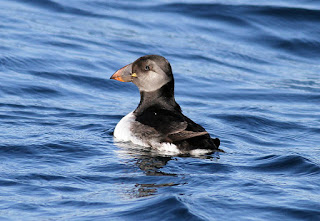 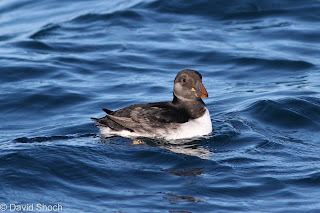 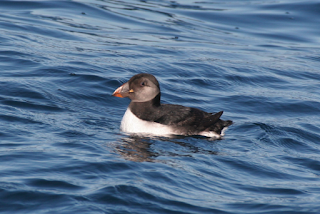 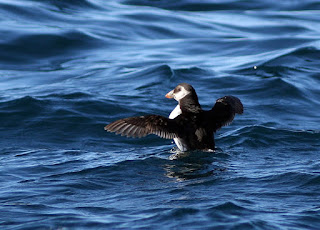 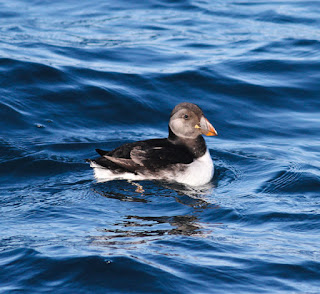 Posted by Kate Sutherland at 12:29 PM No comments:

No pelagic trip is perfect, but some come closer than others.  This one was very close!

At 5:00am, a dozen-and-a-half birders congregated dockside at Lynnhaven Inlet, hoping, as birders always do, for a wonderful day offshore.  The waters of the inlet were glassy calm, and Captains Patteson and Sutherland checked us in and fired up the engines for what would be a nearly perfect winter pelagic trip!

As we cleared Cape Henry in the darkness, a few Northern Gannets, Common and Red-throated Loons, and scoters swept by, with only stars and moon to illuminate them.  Many of us napped, but others chatted about what we might see, on Virginia's first winter pelagic in seven years.  As the day began to dawn, the first Razorbills, then Dovekies began to appear about 18 miles off the cape, and eventually we slowed down to enjoy both species at very close range and at leisure.  Bonaparte's Gulls dotted the horizon, and we watched them carefully for Little Gulls.

For those who remember the pelagic adventures of yesteryear, the contrast to the modern experience - with a captain who is not only the boat owner but also the North Atlantic's foremost authority on pelagic birds - is stark.  Back then, we hoped the captain might be coaxed into stopping for a bird before it flushed, never to be seen again!  With Captain Patteson and first-mate Sutherland, we eased up close to the birds, which were always in perfect light, always close enough to photograph well.  It was like going on a photo-safari!  This sort of approach takes many years at sea to master, and it's likely that no one else in the world can get so close to Dovekies that you can hear them calling, as we did with one that morning!  The "presentations" of these birds seem effortless, but they in fact require a subtle understanding of, and respect for, each species' behaviors.  We were spoiled with studies.

As we pushed farther offshore, having enjoyed these more numerous pelagic species, we kept a constant vigil in the bow, everyone calling out their Razorbills and Dovekies for others to enjoy.  I kept track of both species, singing out the new totals each time they went up: "One hundred eleven; and twelve!"  Eventually, with almost twelve hours of continuous watching from the bow (and a few extra birds seen only from the stern), we tallied 458 Razorbills, shattering the old state high count of 140, and at least 47 Dovekies, many of those very well seen.  Ellison Orcutt, James Fox, and Linda Chittum spent a great deal of time on the bow, spotting the majority of these great alcids.  Thanks, guys!  It was a great day for learning how to identify both species at varying distances.

Dave Shoch, one of the boat's leaders from Charlottesville, then fired up all on board with the call of "SKUA!"  Out in the distance, a Great Skua hurtled along, identifiable mostly by the shape, flight, and those big white patches in the wing, and Captain Patteson gave chase!  We got a bit closer, and a few got identifying glimpses, but the bird then left us in the dust, as so many skuas do.  We will need a rematch.

Just as the skua chase was getting underway, a flock of about 25 Red Phalaropes careened down the starboard side, leaving us wondering whether to look forward or aft!  We would eventually see another 68 of these pretty dove-gray-and-white seabirds, many of them resting quietly on the calm sea.

"KITTIWAKE!" was suddenly the word from the stern, and we looked back to see a tarrock (first-cycle) Black-legged Kittiwake wheeling in the wake with a Ring-billed, 16 Great Black-backed, and a dozen Bonaparte's Gulls.  That kittiwake number grew to ten, then 14 over the next few hours, with both adults and youngsters moving in and out of the flock that followed the boat, accepting handouts of fish-and-fat chum from Sutherland.

What more could we hope to see?  "PUFFINS!" came the call from Dave Shoch, and sure enough there were two adult Atlantic Puffins sitting quietly, just off the bow, both of them seemingly very pleased to be the center of attention for the next 15 minutes or so.  Photographers filled their frames (and their memory cards) - and even had time to enjoy the birds through binoculars!

By lunch time, the list of possible new winter pelagic species had gotten rather small, with only a tubenose, or perhaps a jaeger, still likely for the day's list.  And just as we were getting into position on a small flock of phalaropes, "FULMAR!" was announced over the boat's speakers, with the footnote: "Phalaropes in the bow, fulmar in the stern, take your pick."  The first fulmar, then another, did a lap or two around the boat, giving everyone a good look.  Finally, a big white gull at first thought to be a Glaucous (in the distance), did the same star turn around the boat, showing itself to be an Iceland Gull instead, a rather husky one, to be sure.

By mid-afternoon, some 60 miles offshore, it was time to turn around and head back to port.  We were experts in identification of fulmar, the regular alcids, kittiwakes of both age classes, and phalaropes, so we set our sights on the next possibilities: Manx Shearwater, and the murres, all the while watching the gull flock off the stern for a new species of gull, a jaeger, or perhaps ... that elusive skua.

Just as the Chesapeake Light Tower came into clear view, a Manx Shearwater came cutting toward us from the starboard, crossing close behind the wake, for a great view, narrated clearly from the bridge so that everyone could see it.  For good measure, another one crossed the bow just 15 minutes later, as we were about 15 miles offshore.  Our tenth and last puffin of the day was seen about 31 miles offshore; our last Dovekie about 19 miles; and our last Razorbill about 10 miles from Cape Henry.  All the while we strained our eyes for murres, and discussed their identification and behavior, but we will have to find them on the next outing!

Perhaps the greatest avian spectacle of the day awaited at the approaches to the shipping channel east of Fort Story.  Many thousands of adult gannets, all painted fulvous by the late afternoon light, flew by us, almost close enough to touch, as if following a very large school of fish.  It was like being on the Serengeti during a movement of Wildebeest!  At least three Humpback Whales appeared around us, showing us breath, back, and flukes, as they gorged themselves on whatever baitfish were around.  A few Lesser Black-backed Gulls at last turned up, helping us with our gull list, but jaegers (sometimes here) were not to be seen, as the light left the western sky.

As we pulled up to the dock at Lynnhaven Inlet, we were greeted with a volley of applause from the local Clapper Rails, as if to mark our good fortune offshore.  Many then enjoyed a superb seafood meal dockside, savoring the day's birds along with the coastal cuisine.  And many were heard to murmur about murres (and more skuas!), hoping that the next Virginia pelagic will be soon!

(Ned Brinkley, a leader on our trips since they began (and a friend of Brian's long before that), resides in Cape Charles, Virginia.  We thank him for helping us lead this trip along with Dave Shoch (of Charlottesville) and Bob Fogg (of Cape May, NJ).  Kate thanks him also for helping out by jazzing up our blog with this trip report!  Look for some photos here later this week...)
Posted by Kate Sutherland at 5:04 PM No comments: