We had decided a few weeks ago that we were going to finish up the winter season with the Presidents Day Weekend trips, but after seeing the Black-browed Albatross on Feb. 18, it seemed there was some interest in another winter boat trip. So we put a trip on for the following weekend, and by mid week, it was apparent that Sunday would be our day to run it. There was plenty of wind on Friday and Saturday to stir things up, and once again we found much warmer water than we would have preferred awaiting us on both sides of Cape Hatteras.

There was still a fair breeze from the north when we went to sea Sunday morning with ten eager participants. It was good to have veteran leader Ned Brinkley back on board, and some old salts had come up for it too- Paul Sykes was there, as well as Wayne Irvin and Nate Dias among others. Aside from the thousands of cormorants that we saw on the Sound behind Hatteras Inlet, seabirds were fairly sparse on the south side of the Cape. We beat it across Diamond Shoals and worked northward a few miles off the beach. I had my mind on alcids, skuas, and, of course, the long shot albatross, the thought of which had lured some of these folks out for the short notice trip. We finally started seeing a fair number of gannets north of Avon, more as we went. By late morning we were on Wimble Shoals off the Tri-Villages. The water was cooler up there, only about 50 degrees. We had a couple of encounters with Razorbill, but mostly we saw gulls, gannets, and Red-throated Loons. I turned around 23 miles north of Diamond Shoals and worked slowly back. About eight miles down, still north of Avon, Kate Sutherland looked outside the wheelhouse port window and excitedly said, “There he is!” And sure enough, there was a fine looking Great Skua, about six miles off the beach. The skua scattered our gull flock and engaged a couple of Herring Gulls in the distance. After a minute or so, it went to rest on the water. We followed it around for a while, and had it under observation for about 15 minutes before getting back on course.

It was a very pleasant ride back, quite nice going downsea, and we had an insane number of Lesser Black-backed Gulls with us feeding on the chum, even outnumbering the Great Black-backs much of the time. Just north of Diamond Shoals, a single Dovekie crossed the bow quickly, amazingly just the second Dovekie of the season for us. West of Diamond Shoals we had another Great Skua buzz the flock, as if to say “Hey, you really didn’t need to go all the way to Wimble Shoals!” Closer to the inlet, there were hundreds of gannets and thousands of cormorants, but no afternoon albatross this time. Still it was a nice day out on Bonxie Boulevard, and it was our fourth weekend in a row with Great Skuas, making it the most successful winter we have had for seeing them. It’s impossible to know what next winter will bring, but one thing is for sure. When the time comes, we will have to go out there to truly find out. Thanks to everyone who went with us this winter and especially to Kate who kept the birds going on the stern all season.

First Great Skua of the day: 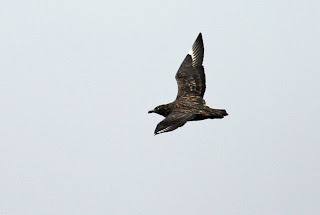 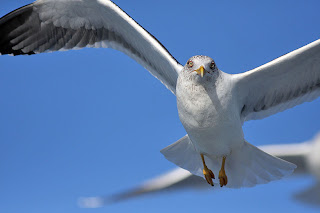 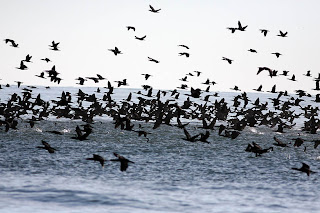