The Stormy Petrel II headed up to Wanchese, NC for our final trips of the summer on Thursday August 22.  Typically, the prevailing winds in the summer are from the SW, making Oregon Inlet the perfect place to run late summer trips since there is cooler green water right offshore, and the warm Gulf Stream waters are not too far out of reach for a day trip.  Friday the 23rd was the first of three days we planned to run from Wanchese, and the day began with some breeze but the winds were never more than 10 or 15 kts from the WSW.  There were reports of large groups of shearwaters east of the inlet in the green water, so the decision was made to head out there and maybe a White-faced Storm-Petrel would show up!  We passed two Leatherback Turtles on the way out in the morning, but we did not encounter much to suggest good concentrations of birds.  The three expected shearwaters were present, Cory's, Great, & Audubon's, plus a few Wilson's Storm-Petrels, but not really in the numbers we had hoped for.

A map of the sea surface temperature off of Cape Hatteras showed a nice edge south of where we were and Brian decided to go for it.  We picked up speed and headed toward the Gulf Stream hoping to find some additional species and more life.  By 1030 we were in a small pod of Pilot Whales and things were looking up!  While we did not get into the hot Gulf Stream water until midday, we added Red-necked Phalarope and Bridled Tern to the list before noon.  The phalaropes were found along a line of sargassum, and we slowly cruised by flock after flock on the water.  Soon after 1200, in the warmer water, we finally had a glimpse of a Band-rumped Storm-Petrel, shortly followed by a Black-capped Petrel!  Wilson's Storm-Petrel numbers were fair all day and we ended up seeing nine Band-rumpeds over the course of the afternoon!  Pilot Whales were popping up around us most of the day and we even encountered some Bottlenose Dolphins in the afternoon.  The time to head for home came earlier than we're used to in Hatteras because we were such a long way from the inlet, but the seas were quite calm by the end of the day and we spotted several Leatherbacks on the way in.  At one point we had a couple surrounded by a small pod of Atlantic Spotted Dolphins - very cool to see.  We had never before seen 10 Leatherbacks in a day on one of our trips, so while we did not encounter any rare seabirds, we still had a record breaking day!

Saturday morning it was much windier than anticipated, the wind had shifted overnight to ENE and picked up.  Although we knew a front was moving through, the forecast was for the wind to really pick up Saturday night into Sunday morning.  Brian made the decision before we even reached the marina to cancel the trip on Saturday and try for an alternate plan.  He would run the boat back to Hatteras Saturday and we would run Sunday's trip down there, weather permitting.  The weather would not permit us to run either day from Oregon Inlet which faces east - the ever freshening winds from the northeast meant the inlet could possibly be closed out by breakers.  Hatteras Inlet, however, faces south and we have the cape to the north protecting the nearshore waters from northerly wind and swell.  Our participants were adaptable and we even had a few join us at the last minute for the alternate trip, so 13 were at Hatteras Landing Marina ready to go on Sunday morning.

The seas were righteous by the time we reached the hot water, which was close in just 120 feet of water!  When the wind is against the current like it was on Sunday, it can cause the waves to really stand up - it was good that we did not hit any really fast current where we were on Sunday!  The birds were there, as expected!  Right off the bat we were in feeding flocks of mostly Cory's Shearwaters with some Great & Audubon's flying around as well!  It was spectacular!  While numbers of Wilson's were not very high, shearwaters and Black-capped Petrels made up for it - just the sheer spectacle was worth the trip out there!  Conditions were not the easiest for spotting and staying on birds since the waves were high and the birds were moving at high rates of speed in the troughs, but they were flying high and pretty close to the boat, so it was all relative.  Just before one o'clock, we had Black-capped Petrels flying like storm-petrels in the chum; Tom Johnson spotted the bird of the day: a Trindade Petrel!  It flew up the slick and then away.  Most people who were outside had a pretty good look at the bird before it became a distant dark gadfly behind some Black-cappeds and disappeared.  We also had at least one Pomarine Jaeger make a close pass and a young Long-tailed Jaeger, fresh from the tundra, flew right into the stern for everyone to see!  So, while it may have been a little bumpy, it was worth it to be out there in the elements - and to see the birds behave so naturally in the wind, while we humans are so grounded...

Thanks to everyone who joined us over the last long weekend of the summer, and thanks also to everyone who was flexible enough to make it possible for us to run on Sunday from Hatteras!  Lev Frid (The Spruce Blog) joined us to help lead both trips this weekend, and we finally saw longtime friend & our most enthusiastic leader, Jamie Cameron, for Sunday's trip.  Tom Johnson helped us out on Sunday as well.  Thank you to Lev, Tom, and Jeff Lemons for letting us use some of their photos here!  (9/3/2013) Here is a link to Lev's post about the trips on August 23 & 25 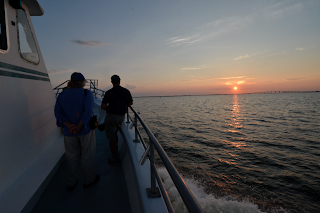 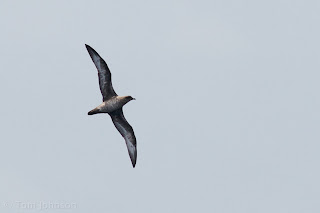 Black-capped Petrel with some chum 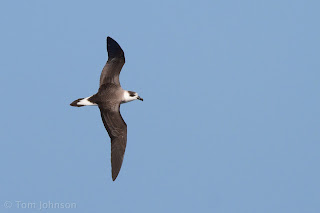 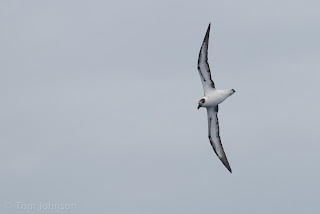 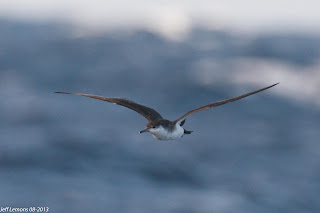 one of the feeding flocks seen on Sunday's trip 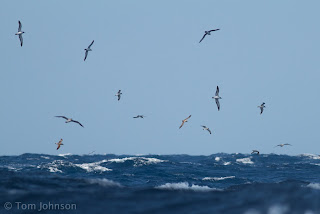 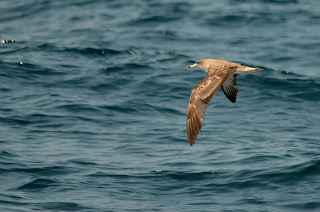 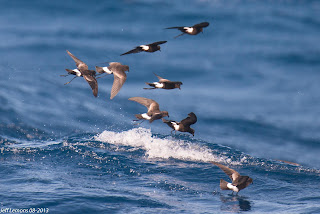 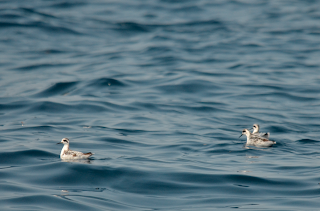 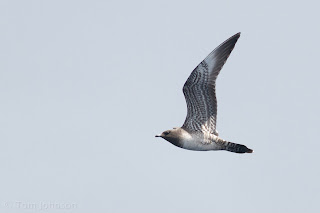 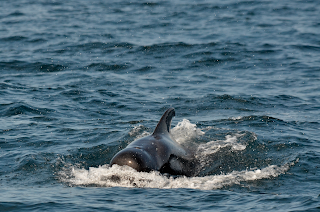 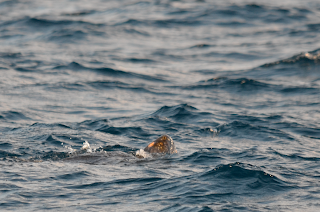 We had some breathtaking views out there this weekend! (photo by Lev Frid) 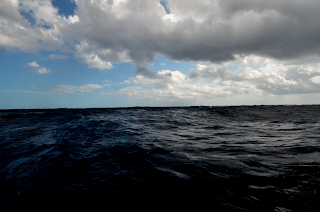 Posted by Kate Sutherland at 7:06 PM