As a mate on one of the fishing boats here once said: “Today is typical of today” and that’s the truth of oceanic birding.  Every day this week has been different, and today was the same (if that makes sense). We headed out early in somewhat choppy seas under mostly cloudy skies that prevailed through the day. Minutes after Kate mused “well it’s June, time for the Pseudorcas...” Steve said “There’s a dolphin...” as a big fin cut the water off the bow and Brian and Kate in stereo yelled “Pseudorcas!!” We spent the next ten minutes or so circling as a loose pod of False Killer Whales (really a big dolphin, in the genus Psuedorca) milled around us, bow-riding and even somersaulting in spectacular breaches—what a way to start the day! Photo by Kate Sutherland 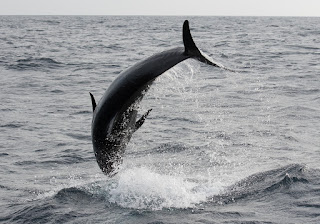 Shortly before reaching the shelf break we crossed a front (an area where two water masses meet, analogous to atmospheric fronts you see on the weather charts) that produced nice close flocks of feeding Cory’s and Audubon’s Shearwaters over boiling fish (likely skipjacks). Shortly afterwards a Bridled Tern was spotted resting on a “Baby Float” life vest and Brian pulled the boat up right alongside for point-blank views. Photo Steve Howell 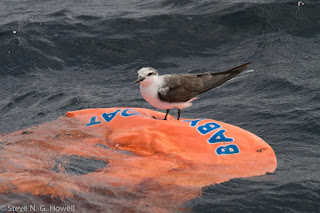 Passing into deep water a Band-rumped Storm-Petrel joined the Wilson’s following in the fish-oil “chumway” that trailed the Stormy Petrel 2 and the first Black-capped Petrels appeared.

One of our Black-capped Petrels, most of which this spring have been on the black-faced type, as here. Photo Steve Howell 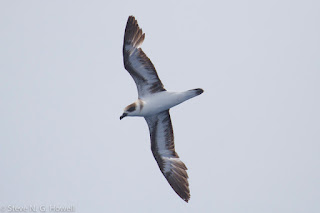 The seas mellowed out and clouds made for pleasant viewing as we steamed slowly on in search of birds. Over the course of the day everyone enjoyed good views of Black-caps and Band-rumps (which today were all of the winter-breeding Grant’s type) as we headed out into the second biggest desert on the planet—the Tropical Atlantic (the Tropical Pacific being the biggest—it has been said that the Pacific is vast, the Atlantic only half-vast).

A molting (and thus winter-breeding) Band-rump: note the faded outer primaries yet to be molted, and how a feeding bird rests on the water with wings raised, not pattering with long legs like the Wilson’s. Photo Steve Howell 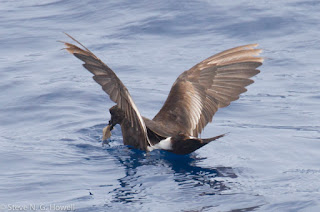 Birds were sparse out in the deep blue desert, but in late morning a 1st-summer Arctic Tern put on a great show, circling the boat several times. Note how this age has a relatively broad black trailing edge to the primaries, a dark leading edge to the upperwing, and can show translucent inner primaries—all “traditional field marks” of Common Tern! In such cases, structure and uniform-generation primaries are key ID features. Photo Steve Howell 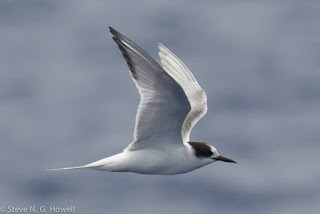 As energy waned in the slow rolling seas and some people were dozing or munching lunch, Ned in the pulpit picked up a distant white speck on the sea—our first tropicbird of the season, a 1st-year Red-billed with an orange bill (transitioning from the dull yellowish of a juvenile to the red of an adult). We pulled up for great looks at this scarce, almost annual visitor, never a predictable bird and always fun to see.
Photo by participant Skip Russell 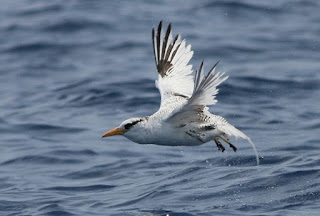 As we worked our way back inshore a Common Tern joined us, followed by a puzzling 1st-summer jaeger that harassed the tern briefly. Consensus (upon review of photos) settled on Long-tailed. Basically there are two kinds of birders: those who find first-summer jaegers challenging and those who pretend they don’t.  Photo Steve Howell 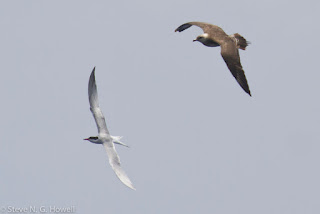 All too soon it was time to speed up and begin our commute back to the dock...

Thank you to everyone who joined us today!  Also a big thank you to our leaders: Ned Brinkley, Steve Howell, Peter Flood, Chloe Walker, & Sage Church - they did an awesome job spotting birds and getting everyone on them.  Thanks to Steve for the post and photos, Skip Russell for his Red-billed Tropicbird photo, and Peter Flood for the photos below!

A couple more photos of the Pseudorcas or False Killer Whales by Peter Flood - Wow, what an awesome capture of the head! 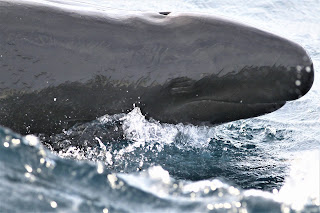 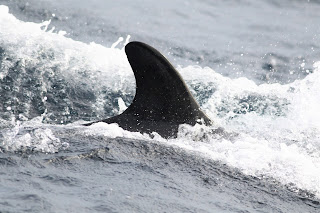 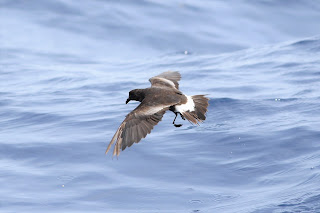 And yes, another photo of the Red-billed Tropicbird by Steve Howell 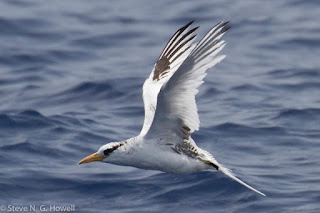