We got out on our first regular winter trip of the season with a full boat of eager participants. We were again blessed with good weather, but the water had warmed up a few degrees as a result of southerly flow in recent days. Instead of water temperatures in the mid to high 40s, we had low to mid 50s. The water inshore looked about the same as last week, but there were not as many birds- especially Razorbills.

I thought it might be worth checking out the edge of the Gulf Stream in hopes of finding some Red Phalaropes and maybe a kittiwake, but our foray offshore was pretty much a bust. We made it out a couple of miles past the shelf break and found water just over 70 degrees, but no birdlife except for what followed along with us.  Our trusty flock included a first winter Iceland Gull, which ended up spending most of the day in our wake (photo by Kyle Kittelberger). 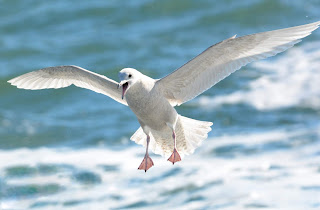 We did see some marine life as we got into the warmer water: a pod of Atlantic Spotted Dolphins came in and rode our bow wave, and we saw several Hammerhead Sharks just inshore of the current edge. There was strong current where we turned around over 20 miles southeast of the Cape.

Having struck out on the south side of the Cape and offshore, I jogged back inshore toward Avon. Bird activity picked up again in the cooler water there. We had a quick look at a single Red Phalarope a couple of miles inshore of a ragged temperature break, and we finally started getting some better looks at Razorbills, which were both flying by and scattered around sitting on the sea (photo by Brian Patteson). 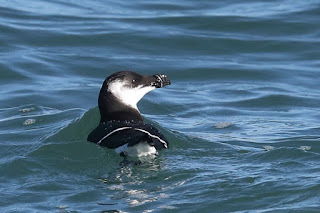 We also started to see a few Manx Shearwaters well inshore, and we ended up with seven for the day. We did not see any last weekend, so it was nice to find them on this trip. There were good numbers of gannets on the north side, and some were feeding. We still had a good following of gulls, and shortly before 1330, they attracted the attention of a Great Skua, which came charging in and made an attack only to soon lose interest and drift away. It seems like that’s how we see them on bright sunny days. I don’t think they waste much time flying around, and if they aren’t close, it’s hard to figure out how far away they have gone before they land on the water. Anyhow, it was one shot and it was gone: a lifer for some and a better view desired for others.

There was a lot of life all the way to Diamond Shoals- hundreds of gannets, large numbers of Bottlenose Dolphins, and good numbers of Bonaparte’s Gulls and Razorbills feeding. It thinned out when we crossed the shoals and did not pick up again until we got close to Hatteras Inlet. A Little Gull quickly crossed out bow on this leg of the trip, but it did not slow down enough for most people to see it. This is a species that we actually see with some frequency on these trips, but unless they are feeding they can be tough to get on.

I would like to thank everyone who joined us on this trip. It was a great showing and people came a long way to go with us. I would also like to thank Kate Sutherland for all her hard work on the deck as usual, and also our guest leaders, Kyle Kittelberger and Nick Newberry. I’m not sure what next weekend will bring, but possibly colder water again, so maybe more auks. There are currently good numbers of puffins in the shelf waters off the Virginia Capes and maybe a few will get down here in the days and weeks to come.

Some additional photos from the trip!
We saw all age classes of gannets, first winter bird (Kyle Kittelberger) with a second winter individual below (Nick Newberry) 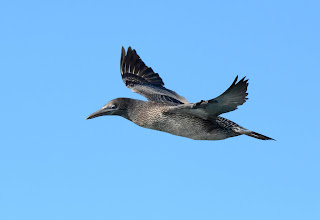 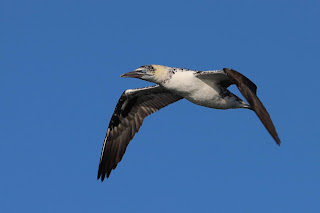 Some Bonaparte's Gulls with a Razorbill on the water (Kate Sutherland) 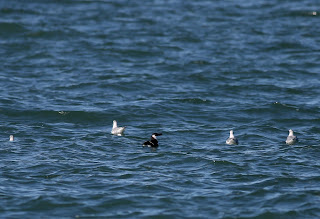 A couple more photos of the Iceland Gull (Kate Sutherland) 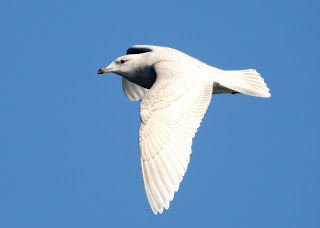 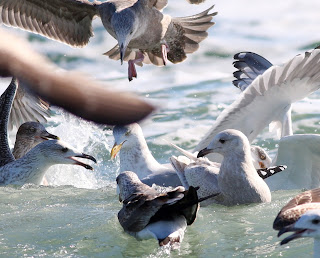 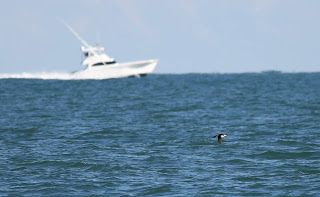 We saw at least 200 Lesser Black-backed Gulls over the course of the day!  Here are a couple images of adults (Nick Newberry top, Kyle Kittelberger below) 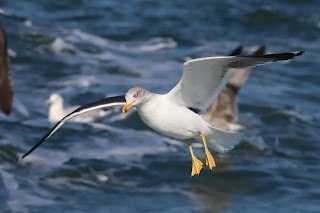 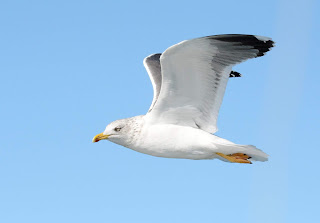 We also had some young Brown Pelicans that followed us offshore, but most of the adults were closer to the beach (Nick Newberry) 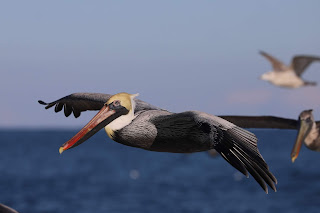 Posted by Kate Sutherland at 1:18 PM