This weekend we went from slick calm on Saturday morning to the high seas on Sunday with northeasterly winds up to 20 mph with higher gusts!  There were birds feeding up on the shelf Saturday morning, so we had our first Black-caps in about 160 feet of water!  We also found a number of shearwaters in there as well, Sunday was totally different and we found the birds farther offshore.  Both days the Gulf Stream produced nice, feeding flocks of shearwaters with Black-capped Petrels, Sooty Terns, and jaegers.  But our flock on Sunday was really magical!  Hundreds of shearwaters were swarming around, small bunches of them bickering on the water as they dove beneath sargassum to feed (Kate Sutherland), 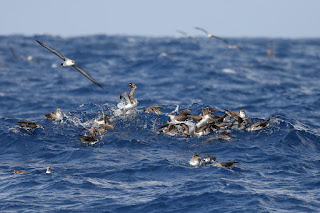 other groups pulsing into the air over feeding skipjack tuna.  We stayed with our flock on Sunday for over an hour and a half.  They took us to the south a few miles, then back to the north again and we were able to find TWO Trindade Petrels (photo of first individual by Kate Sutherland) in this flock plus a Sooty Shearwater.  Epic birding for us here in the Gulf Stream offshore of Hatteras! 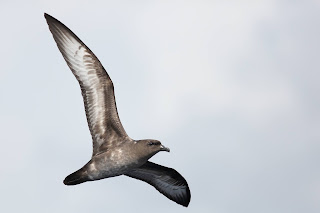 Saturday we had a Trindade Petrel as well!  An intermediate morph buzzed close by the stern while we were running, heading to a small beehive (feeding group) of shearwaters that we spotted on the horizon.  Brian slowed down when the shout went out, but the bird flew away from us and we just got the one pass, at least it was a close one!  The feeding flock, when we arrived, had over a hundred shearwaters, some Sooty Terns - adults and this year's young - plus a couple of Pomarine Jaegers and a Parasitic!  The Parasitic even sat on the water for close approach, though it flew off into the glare, much to photographers' dismay!  As the day went on the winds picked up from the north and birds really started flying!  Black-caps responded well to the chum and we had over 20 feeding behind the boat by early afternoon.  It was quite a show with some harassing shearwaters for food, and nice views of some really dark faced individuals! (Kate Sutherland) 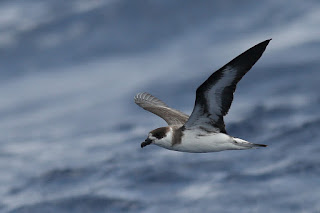 Sunday's trip added five more species to the weekend list with Sooty Shearwater, Red-necked Phalarope, Bridled Tern, South Polar Skua, and an adult Sabine's Gull!  It was windy on Sunday, did I mention that?  And leader Ed Corey still spotted a Bridled Tern sitting on some timber out there!  It sat patiently for us to approach and stayed put on its perch as we pulled away.  The phalaropes were all quick fly-bys, though there could have been some sitting around on the water, conditions made it a bit difficult to find them there!  The Sooty Shearwater zipped through our large feeding group where we had the Trindade Petrels, a nice bird for us to find late summer!  Early afternoon as we worked our way back into the shelf a young Herring Gull joined our Black-cappeds and shearwaters in the slick.  Just a few moments later, a South Polar Skua dropped in as well!  It circled us and then flew off to chase something ahead of the boat - it was an adult Sabine's Gull!! (Ed Corey) It's been years since we've seen a Sabine's Gull on one of our trips! 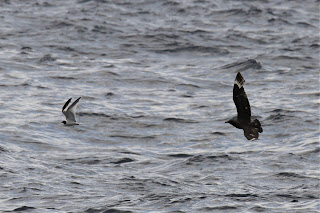 Then a second skua dropped in!  What a show!  It was awesome to watch these birds working our followers while Black-capped Petrels buzzed them and the Herring Gull!  When we picked up to continue toward the shelf break we realized that the skuas really crashed the party!  The feeding flock was a bit diminished after their visit.
We had incredible views of Cory's, Scopoli's, and Great Shearwaters in the feeding flocks as well as in the slick both days!  Audubon's were very cooperative coming in close to the boat and feeding in the slick with some of the Wilson's Storm-Petrels we were able to entice to follow.  Sooty Terns were also cooperative near the feeding flocks and we again saw an adult drop down to feed a youngster on the water!  This pair did this a couple of times that we saw! (Kate Sutherland) 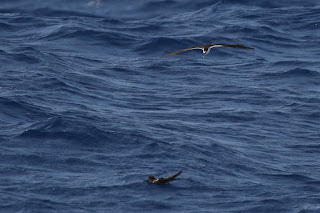 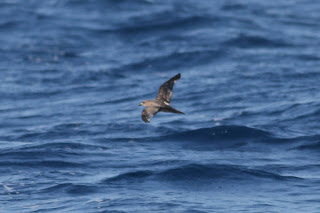 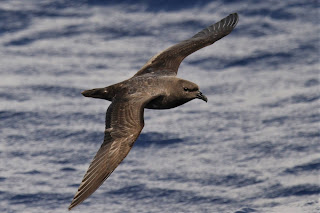 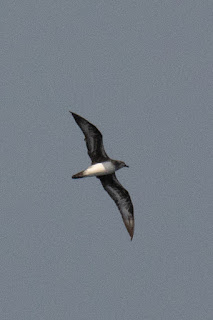 Black-capped Petrels were really showing off in the wind both days!  It was exciting to have a young, white faced looking individual sit on the water long enough for a photo-op on Saturday! (Kate Sutherland) 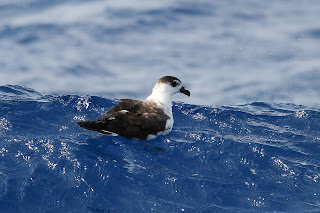 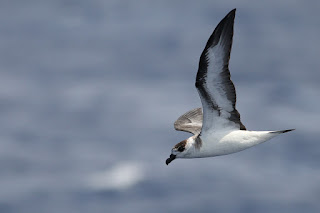 Perhaps the same or similar individual showing off its feet!  I'm not sure I've seen them do this before...!  (Kate Sutherland) 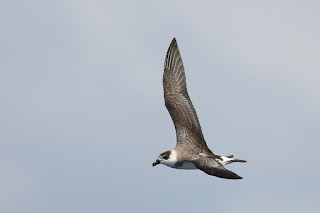 Kleptoparasitic chase?  I saw a few Black-cappeds quarreling with shearwaters in the slick on Saturday (Kate Sutherland) 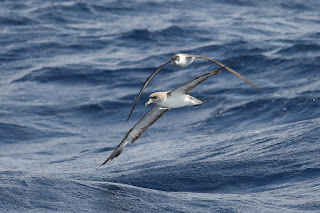 Mobbing behavior?  One of the skua was being pursued by up to three Black-cappeds at one point on Sunday! (Kate Sutherland) 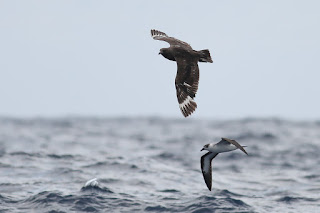 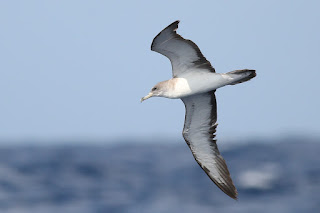 On Sunday I captured an image of one with a flyingfish!  It looked like our Atlantic four-winged flyingfish, aka our Atlantic Patchwing! (Kate Sutherland) 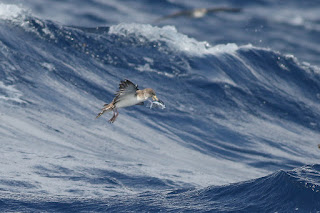 Our flock on Sunday, here you can see two Atlantic Cory's to the right up high and a Scopoli's to the left (Kate Sutherland) 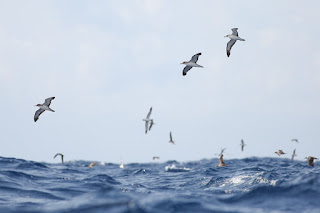 This ratty looking Scopoli's stayed with us for a long time on Sunday! (Kate Sutherland) 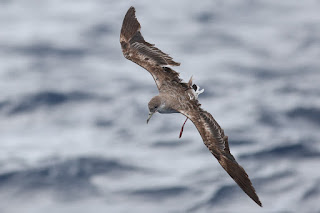 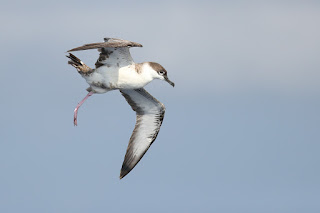 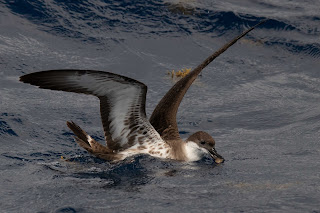 It seemed like both days we had Audubon's Shearwaters with Wilson's Storm-Petrels in the slick! (Ed Corey) 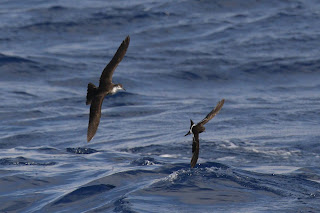 Another record shot of our Sabine's Gull!  (Kate Sutherland) 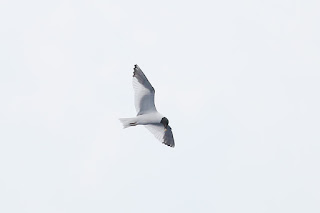 Our Bridled Tern that Ed found for us on Sunday morning, with a bit of Sargassum!  There was a lot of life under its perch!  (Kate Sutherland) 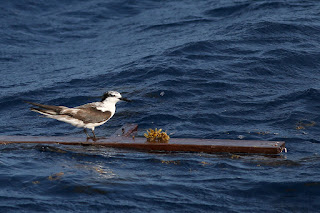 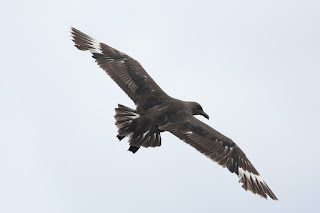 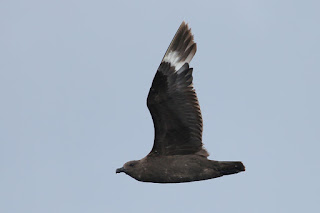 One of the Pomarine Jaegers we saw on Sunday (Kate Sutherland) 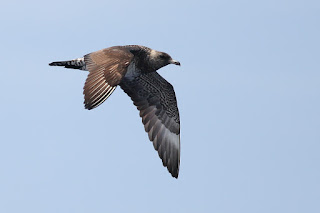 And just so you can see how calm it was on Saturday morning, I captured some nice images of our wake! (Kate Sutherland) 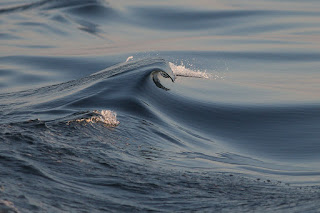