Hurricane Epsilon passed by us far to the east earlier in the week, resulting in some nice swell - a bit too nice to make it out on Friday, so we were hopeful that it would be just right to cross the Hatteras Inlet bar on Saturday morning for our trip offshore.  And as luck would have it, just right!  Plus we were treated to a gorgeous sunrise (photo by Kate Sutherland) and light winds from the north. 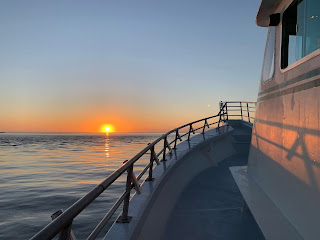 As we headed to the south southeast Brian spotted a Leatherback turtle, not up long enough for anyone else to see, but definitely a notable sighting!  Our first hour at sea was quiet, but then shearwaters began popping up and we found a few small feeding groups on the water, mostly Cory's (photo by Brian Patteson) but a few Greats were with them as well. 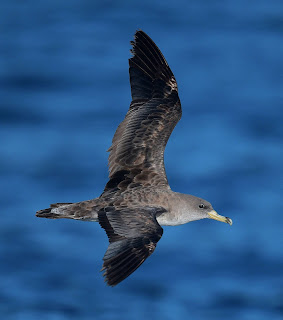 We took our time heading to the shelf break allowing us to investigate a nice Sargassum line in about 200 feet of water.  It was here that our first Scopoli's Shearwater of the trip was photographed and we found a nice ocean sunfish (Mola mola) swimming along the surface!  A nice tree and some coconuts were in the Sargassum along this current edge, but we failed to turn up a Bridled Tern.
We reached the shelf edge just after 1000 and like magic, there were the Black-capped Petrels!  The first individual was a bit distant, but the second bird was much more cooperative, zipping toward the port side, across the bow, and down the starboard before flying off.  We promptly put out some chum blocks to see if we could lure a few more in while the light was nice!  The views of these freshly molted birds were stunning and we had a number check us out during our time in the deeper water (photo Kate Sutherland). 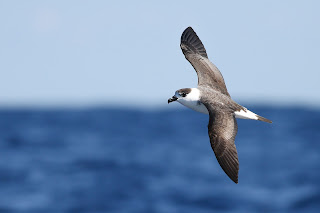 Less than an hour later I spotted two high fliers and it turned out a Black-capped Petrel was pursuing a Pomarine Jaeger!  We watched them for a few minutes before they headed back toward the sea and out of sight.  Two Poms joined us near the boat just a few minutes later, one may have been the one we saw with the Black-cap, but it was tough to tell from the earlier, distant photos.  These two birds were very cooperative, sitting on the sea and flying around the boat for photo-ops.  Black-cappeds and Pomarine Jaegers were the highlight species in the deep, and while we had a few shearwaters out there, most of them were in on the shelf.  Surprisingly we did not find any Audubon's Shearwaters even though we did see a lot of Sargassum, we could have missed them in the swell, or they just might out in the deep.
The Pomarine Jaegers we saw mostly looked adult-like with one young individual who hatched last year.  In addition to the mostly light morph individuals we saw, we had two dark morph Poms, one still had tail streamers while the other, though a bit more distant, did not seem to have much of a tail.  A few of these adult-looking birds were in mid-primary molt which is not unexpected for adults in late October, but also could be near adult individuals.  At least one adult type bird had a few barred coverts in the underwing, indicating perhaps a third year.  The only bird we could age with certainty was the one in its "first summer" or second year, with completely barred underparts just beginning its second pre-basic wing molt (Howell 2007) (photo Kate Sutherland). 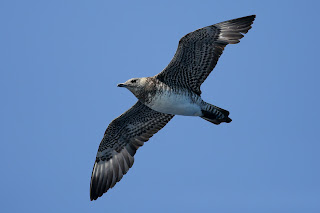 Black-cappeds were definitely the stars, though, as they rode the swell, chased jaegers, and made some incredible passes by the boat!  We had both white faced and dark faced types over the course of the day.  Another treat came in the form of a pair of Sooty Terns that flew in to check out the chum and then moved on, an adult and its attendant juvenile.  Some offshore Bottlenose Dolphins, with a number of young individuals, came in to bow ride as we headed back inshore to the shelf break, some Atlantic Spotted Dolphins had done the same in the morning on our way out.  Quite a day for late October!
Thank you to everyone who joined us and made this trip a go!  Brian and I appreciate all of your support so much, especially this year.  Our next trip in November is full, but we should have our 2021 schedule posted just after that and perhaps we will even add a trip in December!
Species List October 24, 2020
Black-capped Petrel - 34 to 35
Cory's Shearwater (Atlantic) - 12 (verified by photo)
Scopoli's Shearwater - 3 (verified by photo)
Cory's type - 70 to 71 (not verified by photo to one species or the other)
Great Shearwater - 26 to 27
Sooty Tern - 2
Pomarine Jaeger - 8 to 9
jaeger sp. - 1
Atlantic Spotted Dolphin - about 25
Offshore Bottlenose Dolphin - about 30 to 31
Leatherback turtle - 1
sea turtle sp. (prob Loggerhead) - 2 spotted by participant
Ocean Sunfish (Mola mola) - 1
We also saw a number of moths and a small red butterfly offshore of the shelf break, then a sulphur on the shelf in the afternoon.
A dark faced Black-cap riding the swell. (Kate Sutherland) 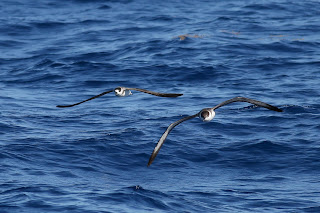 A couple more Cory's Shearwaters images - on the water and taking off showing the dark under primaries (a Scopoli's will show white in the under primaries).  Compare the yellow bill and pale head with the Great Shearwater below.  (Kate Sutherland) 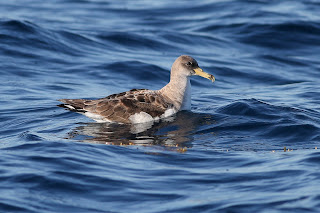 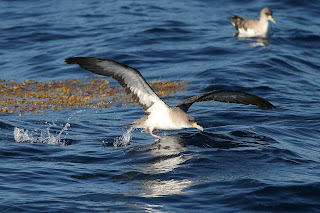 Great Shearwaters were cooperative in the slick, as they usually are! You can see the black bill and dark cap plus the mottled underwing and dark belly patch in this photo.  (Kate Sutherland) 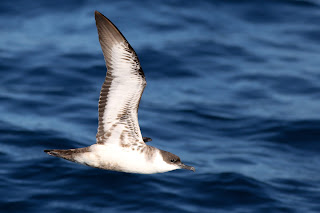 Brian was quick enough to capture an image of our young Sooty Tern!  (Brian Patteson) 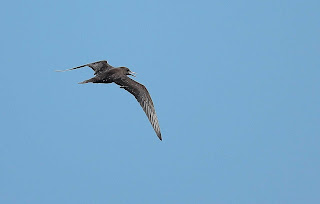 And now for the Pomarine Jaegers!  We covered the first summer bird up above, so now let's take a look at the others we saw.  At least a couple looked like this bird, adult-like, in mid primary molt with fresh looking central rectrices and dark underwing coverts.  (Brian Patteson) 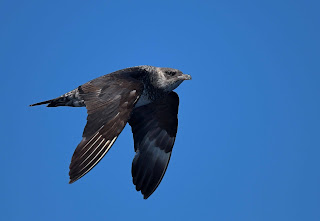 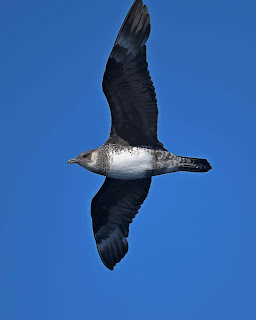 We had at least one bird with a longer tail, but upon inspection of the underwings there were some barred coverts remaining indicating a possible third year individual.  Its primary molt was similar to the other birds we saw.  (Kate Sutherland) 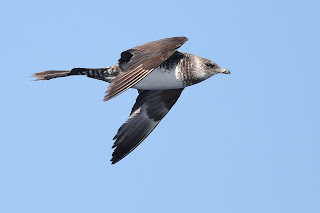 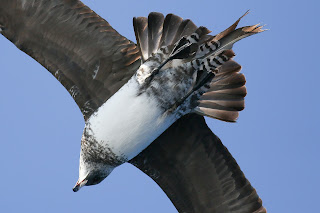 While the water was a little choppy for seeing the Mola mola underneath, I did capture a bit of the fin out of the water.  This creature is the world's heaviest bony fish, and produces more eggs than any other known vertebrate!!  An estimated 300 million!  (Kate Sutherland) 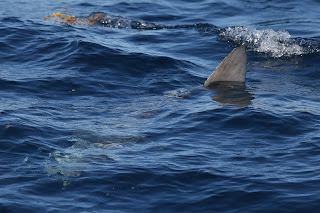