Expedition Diablotin May 2019 - by Brian Patteson

*Note: This report was written by Brian Patteson just after the Black-capped Petrel capture trips in May of 2019

The Black-capped petrel is the bird that put Hatteras on the map as a pelagic birding destination as early as the 1970s.  Black-caps nest in the Caribbean but feed primarily in the Gulf Stream of the southeastern U.S.  Hatteras is the closest port to the Gulf Stream north of Florida and it's also less than 25 miles to the edge of the continental shelf.  On a typical day trip we get to spend five or six hours in the company of Black-capped Petrels.

We know that Black-caps nest on Hispaniola in both Haiti and the Dominican Republic, and we also know they were formerly more widespread but deforestation and alien predators have taken their toll.  Based on radar studies, it seems likely that Black-caps are also nesting on Dominica, but finding a nest is like looking for a needle in a haystack because these birds nest underground in rugged terrain within the forest.  Black-caps might also nest on Cuba and Jamaica, but that is speculation at this point.

There is quite a bit of variation in what we call Black-capped Petrels and it has caused some of us to wonder if it could be related to nesting distribution.  We have noticed a difference in molt timing between "white-faced" and "black-faced" Black-capped Petrels, and genetic sampling suggests the variation is not random.  Could it be the "white-faced" birds are nesting on a different island or different mountain ranges on Hispaniola away from the well studied birds in the Dominican Republic?  Or could they be coming from Dominica, where the type specimen, a white-faced bird, was collected?

Answering these questions is a tall order considering the large tracts of available habitat that would need to be searched.  Some years ago, several of us decided the best way to possibly find unknown nesting sites would be to tag several Black-caps at sea with satellite transmitters and let the birds do the work for us.

The American Bird Conservancy (ABC) took an interest in tagging Black-caps several years ago, but it has taken awhile to come up with a good plan for catching them at sea.  Black-caps are wary birds and we knew from experience that catching one in daylight hours from the Stormy Petrel II would be all but impossible.  Black-caps are sometimes very responsive to chumming, however, so we had that going for us.

Several months ago, we decided it might be worth trying to fire a net at the petrels in a chum slick from a small boat.  Brad Keitt of ABC approached me with the idea, and when we agreed to give it a shot, he lined up Chris Gaskin from New Zealand to come over and do the net-gunning.  Pat Jodice and Yvan Satge of Clemson got onboard to apply the satellite tags and gather data on the tagged birds.  I set aside a nine day window in which to work, thinking it would probably take as many days as we could get out to get just a few tags on if we were lucky.

On May 7, the team arrived and we loaded a 10 foot long RHIB with a 15 hp outboard engine aboard the Stormy Petrel II.  This was our catch boat.  Field work began the morning of the 8th.  We quickly found several Black-caps about 28 miles southeast of Hatteras Inlet, we put out a slick and launched the boat.  Chris had a shot with the net within ten minutes of being out.  About an hour later, he and Yvan brought the first netted Black-cap back to the boat and history was made.  About as soon as they could repack the nets and get back out in the RHIB, they had another shot and were soon back at the boat.  It was an encouraging start, and to further bolster morale, a Bermuda Petrel flew up the slick while everyone was aboard the mothership, Stormy Petrel II.  We ended up catching three birds and getting two tags out the first day.  All of the birds were released in good shape.

Our second day was even more productive and we got four tags out, including two on "white-faced" birds.  We also saw another Bermuda Petrel from the Stormy Petrel II.  We had too much wind and sea to work the next day.  When we got back out on May 11, our luck changed.  We had a full day with no captures.  As a consolation prize, we got to see Trindade Petrel and Fea's Petrel from both the Stormy Petrel II and the catch boat.  Two days of wind kept us ashore on Sunday and Monday but we got to enjoy some of the dolphin (mahi) we caught in the slick on Saturday for dinner.  We also got to see that all six of our tags were working!

Tuesday May 14 was a bit choppy, but we deployed the catch boat with no issues and we had good action in the slick.  We ended up catching four more Black-caps, including two "white-faced" birds, and that meant we had all the tags out.  We were done and on our way back before lunchtime!
I don't think any of us would have imagined that we would tag ten Black-capped Petrels at sea in just four days of fieldwork!  It was a team effort and we would like to thank everyone who took part:


*Postscript: We tracked the birds well into the north Atlantic and while some tags failed in the first few months, at least one white-faced bird was tracked back to Hispanola in late September 2019 as well as one dark-faced bird the following month.

Nice conditions for our first day of work - Yvan Satge and Chris Gaskin head out in the RHIB. 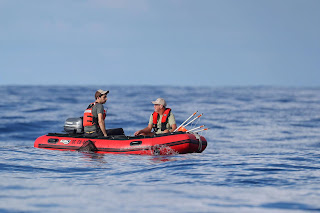 Not much wind, but some swell for birds to fly on 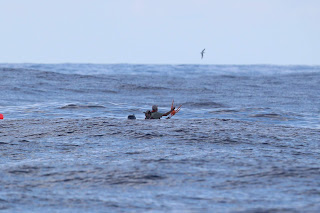 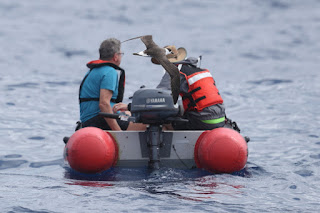 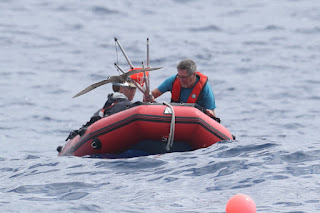 And two minutes later, another opportunity! 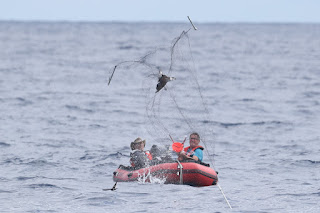 Our first capture was a dark-faced bird, and it was a biter! 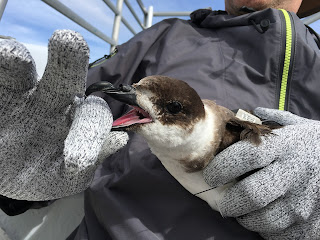 Our chum also attracted some jaegers, including a Long-tailed 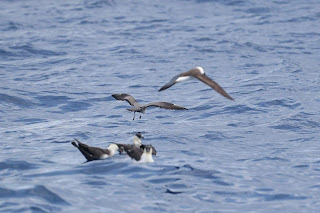 We saw several Pomarine Jaegers on the first day 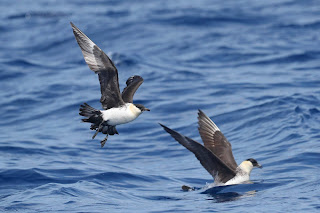 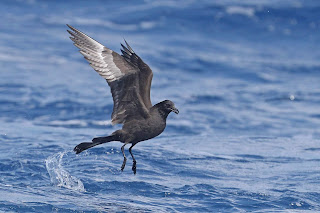 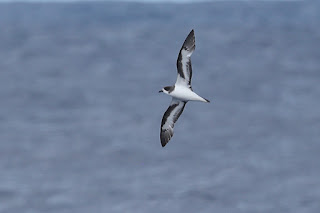 The Bermuda Petrel, also known as the Cahow, is a fair bit smaller than a Black-cap.  We also had another Cahow the next day! 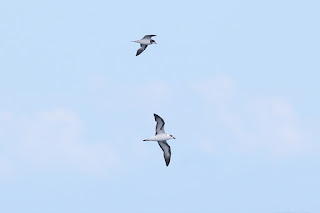 We had great looks at storm-petrels 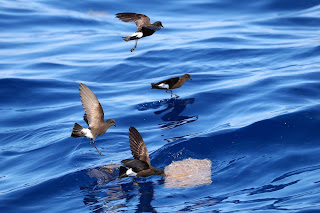 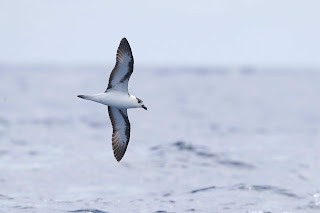 Kate prepares to release a white-faced bird on Day Four 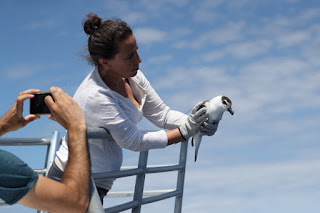 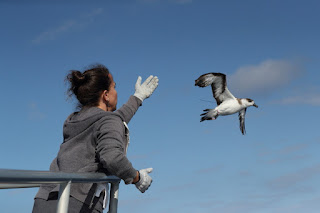 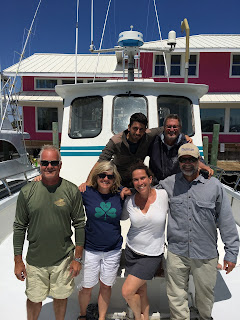 Posted by Kate Sutherland at 6:57 AM