Different wind for our June 4th trip, north / northeast with an underlying easterly swell.  Skies were cloudy as we left the dock in the morning switching to partly cloudy out in the Gulf Stream.  The wind was against the current today so the blue water was a bit sportier than the nearshore, shelf waters which can make for an exciting day to watch seabirds!  They were certainly in their element out there today and they were also hungry (Kate Sutherland GRSH & WISP), 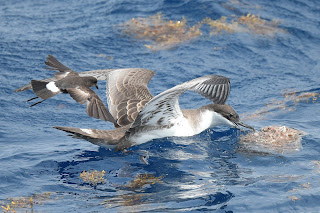 so we had good luck with the chum and also perfect conditions for studying how these birds move around in the wind and use the sea surface / air interface to help them travel.  We found a place with some Black-capped Petrels and set out for a short drift. (Kate Sutherland) 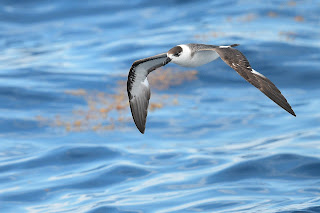 It was very successful for the usual suspects, but it was a little later that morning when the Fea's Petrel came zipping in to the boat and proceeded to make numerous passes, feeding in the chum like they will do with the shearwaters and storm-petrels!!  A gorgeous individual that had hundreds of photos taken during its time nearby. (Ed Corey) 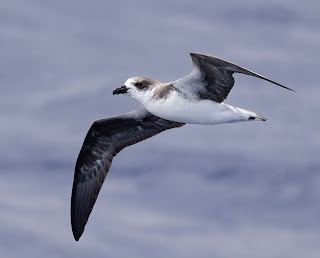 This was our seventh or eighth "Fea's" Petrel this spring, and while we use this general name for these gadfly petrels with blackish looking underwings, it is actually the "Fea's Petrel Complex" with some cryptic species nesting in different locales.  Pterodroma deserta (Desertas Petrel) nests on Bugio, part of the Desertas Islands near Madeira in the western north Atlantic.  Another species, Pterodroma feae (Cape Verde Petrel), nests on the Cape Verde Islands.  These two look very similar and are difficult to differentiate to species away from their nesting islands.  They do have different breeding seasons and also some size differences, underwing patterns, and known distributions...but easily determining them at sea away from their breeding grounds is not yet something we can do.  We expect that these birds we see from Hatteras are Desertas Petrels, not molting, with a little white in their underwings, and sometimes large, deep bills.  However, since there is much overlap between the two species and molt can be useful but does not always take age or aberrations into consideration, we err on the side of caution and note that these are presumed, possible, or probable Desertas Petrels in the Fea's Complex!  While I know this doesn't answer all of the questions you may have about yet another complicated, at sea identification, we will do our best to continue keeping you posted on what we can do with current criteria!
Our chum was very effective and our inshore tack had Great, Cory's, Sooty, Manx, and Audubon's in the slick with Greats by far out numbering the others! (Nate Dias) 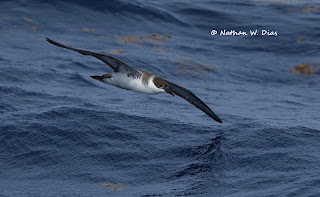 All of them made close passes by the stern at one time or another, however.  Wilson's Storm-Petrels were also cooperative and we had nice passes by both Leach's and Band-rumpeds over the course of the day!  Tough to follow some of them in the large swells, but a few times they came close enough that it didn't matter.  While in the blue water we also had a Roseate Tern (Ed Corey) 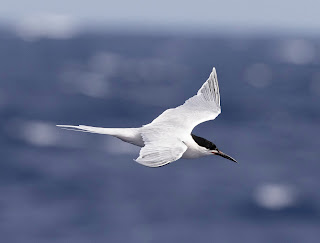 and Arctic Tern each pay us a visit and check out the slick.  This was our first Roseate of the spring and it was awesome to see one, it is not a species we commonly find on our trips though they have been at Cape Point in varying numbers over the past few springs.
On the shelf as we headed back Ed Corey spotted a flock of feeding shearwaters.  Brian caught up to them and as we approached a Brown Booby was spotted feeding there with them! (Ed Corey) 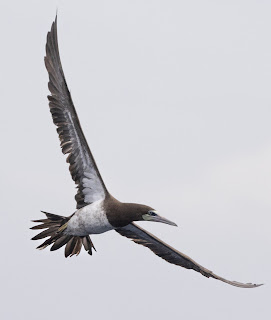 Wow!  This was a much better look than the one we had earlier in the spring and Brian was able to approach it at the best angle for us to see it.  We had really great views as it dove and fed with the Cory's and Greats that were also present!
Unfortunately we had to cut our long weekend short due to high winds and short period seas forecast for Sunday, not to mention the swell beginning to move in from Tropical Storm Alex!  But we were really glad to get out there for at least the two days and find such a great list of birds!
Thanks so much to everyone who joined us out there!  A big thank you as well to our leaders: Todd McGrath, Chris Sloan, Nate Dias, and Ed Corey, they all did a great job and also contributed photos for the blog!
Species List for 4 June 2022
jaeger sp - 1
Laughing Gull - 1
Roseate Tern - 1
Arctic Tern - 1
Wilson's Storm-Petrel - 330 to 380
Leach's Storm-Petrel - 7 to 8
Band-rumped Storm-Petrel - 6 to 7
Leach's / Band-rumped - 2
Fea's (likely Desertas) Petrel - 1
Black-capped Petrel - 107 to 108
Scopoli's Shearwater - 1
Atlantic Cory's Shearwater - 19
Cory's / Scopoli's - 55
Great Shearwater - 68 to 69
Sooty Shearwater - 2
Manx Shearwater - 2 to 3
Audubon's Shearwater - 23
Brown Booby - 1
peep sp - 1
Offshore Bottlenose Dolphin - 17
A couple more images of the Fea's Petrel by Kate Sutherland and one by Chris Sloan 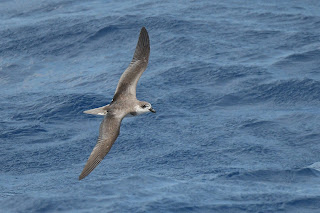 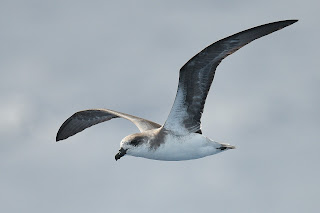 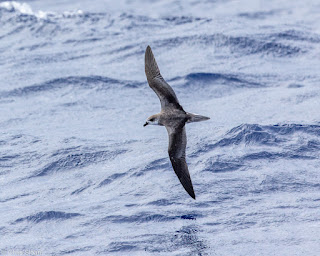 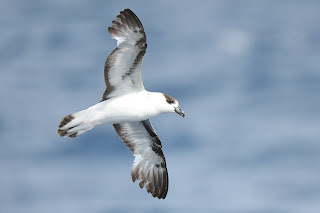 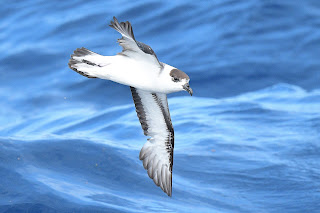 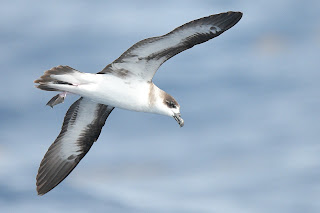 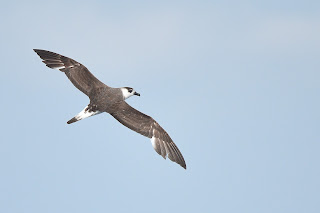 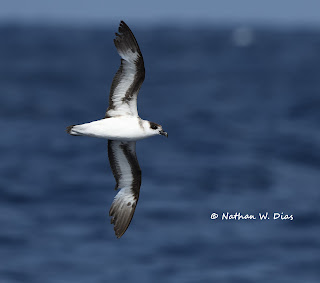 I photographed one Scopoli's in the 1030 period, you can compare the underwing to the Atlantic Cory's below and see the white in the underside of the primaries in the former (Kate Sutherland) 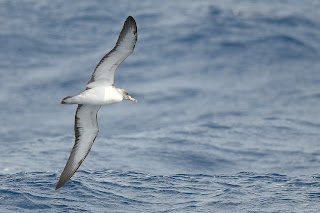 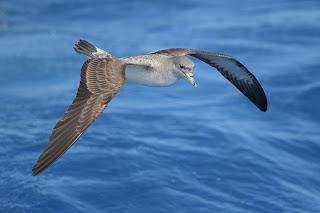 The Sooty Shearwater we had offshore followed us for awhile in the slick, resting on the water occasionally (Kate Sutherland) 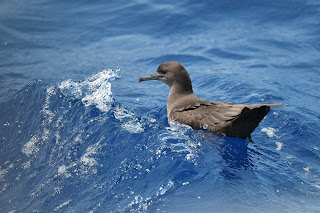 It was really cool to watch the Manx Shearwaters work their way up the slick, their flight is so much more powerful than the lighter Audubon's Shearwater (Kate Sutherland) 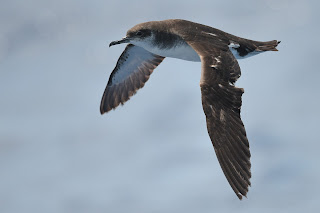 Wilson's Storm-Petrels were a lot of fun to watch on our drift! (Kate Sutherland) 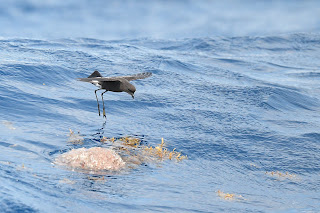 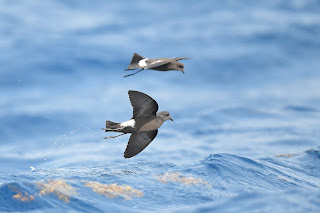 The Great Shearwater who ate a lot of the chum didn't mind them at all... (Kate Sutherland) 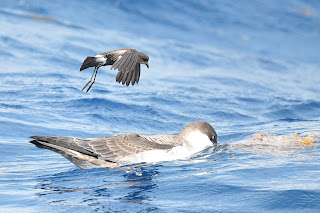 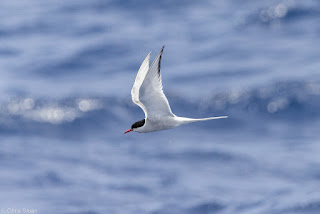 The Laughing Gull that joined the slick offshore (Kate Sutherland) 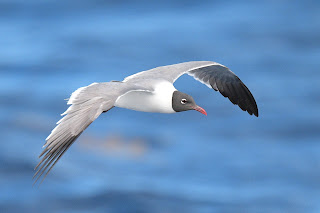 Posted by Kate Sutherland at 9:35 PM