Hurricane Fiona swept past North Carolina some 550 miles to our east last Thursday night / Friday morning reserving her wallop for Bermuda, we hope the Cahow nesting islands there did better than expected! (Image from NOAA NHC website Thursday evening) 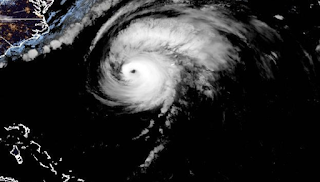 Since she was such a fast moving storm we were able to get offshore on Saturday in some residual swell, but without the wind to make it too challenging. We can tell fall is here by the number of different species we see on the shelf! Saturday we found a lot of terns, including over 160 Black Terns, and some gulls on our way offshore plus a Great Blue Heron, a couple of Great Egrets, and a Peregrine Falcon. As we approached the shelf we found ourselves already swept up in some Gulf Stream current with about 1.5 knots closer to the break and a nice, long period swell of about 6 to 7 feet. This swell made birding a challenge! We would see a bird arc up then down into the trough never to be seen again... So, once everyone got acclimated to how to bird the swells, we were in business! Here is an Audubon's in front of a swell for perspective: 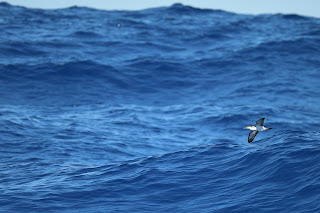 Right over the shelf we saw our first Black-capped Petrels. 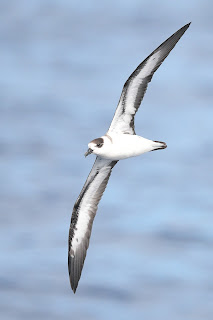 Cory's and Scopoli's Shearwaters were the most abundant birds of the day and while most were not able to be narrowed down to one or the other, we did see some representatives of both well. Here are images of an Atlantic Cory's (top) and Scopoli's (bottom). 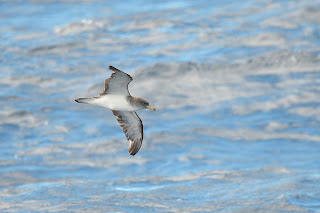 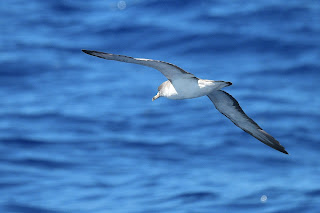 Great Shearwaters were not very cooperative until later in the day when at least a couple came to check out the chum. The small Audubon's Shearwaters were difficult to get everyone on since they tend to stick close to the surface of the water in less windy conditions and were easily lost in the swell - but we finally had some excellent views of them too! We were pleasantly surprised to find a number of Wilson's Storm-Petrels coming in to check out and feed in the slick right off the bat 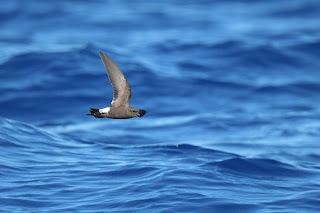 there were even some in passing on the shelf in the morning and afternoon. Really nice views of these small tubenoses flitting around and dropping their long legs down to patter on the water. The highlight of the day for me was finding a couple of flocks on the water in the deep, with nice numbers of Black-caps - one group had at least 25! Another had Black-caps, Cory's / Scopoli's, and Wilson's Storm-Petrels.
Back on the shelf in the afternoon we had reports of some shearwaters a bit to the north so we jogged up there to take a look and found Cory's, Scopoli's, Great, and Audubon's Shearwaters feeding on bait fish pushed to the surface by some false albacore. Scattered about were small feeding flocks of Black and Common Terns as well. Just after 2:30 I spotted a Bridled Tern ahead in one of the flocks, we had a glimpse, but unfortunately it did not show well and flew away. Leader Jason Denesevich had a couple that were closer less than an hour later.
Overall it was a successful day out there! We found everything we expected to see and were able to have some great looks at them, plus we had the thrill of experiencing a big swell offshore - and observing how our incredible seabirds are so well adapted to this environment!
Thanks to everyone who came offshore with us and thank you also to our leaders, Jason Denesevich and Matthew Withrow, for helping Brian and I lead the trip. All photos today are mine.
~Kate Sutherland
Species List for 24 September 2022
Black-capped Petrel 72 to 76
Atlantic Cory's Shearwater - 11
Scopoli's Shearwater - 12
Cory's / Scopoli's - 94
Great Shearwater - 9 to 10
Audubon's Shearwater - 25
Wilson's Storm-Petrel - 36 to 38
Red / Red-necked Phalarope - 1
Bridled Tern - 3
Sooty / Bridled Tern - 1
Jaeger species - 1 to 2
Other Species:
Laughing Gull - 9
Herring Gull - 3
Great Black-backed Gull - 4
Black Tern - 190
Common Tern - 175
Royal Tern - 10
Great Blue Heron - 1
Great Egret - 2
Peregrine Falcon - 1
Warbler species - possibly a Palm Warbler
Offshore Bottlenose Dolphin - 17 to 20
Coastal Bottlenose Dolphin - 18 to 20
Ocean Sunfish (Mola mola ) - possibly seen by participant Dick Veit
Seaturtle species - possibly seen below the surface by participant Alina Martin
We also saw a number of Cannonball and Moon Jellyfish
As always, it was awesome so see the variation in Black-capped Petrels out there, and we had some really nice dark individuals like this one below: 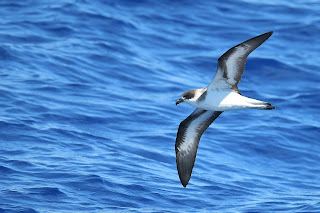 This can be compared with the paler individual pictured in the text above. That same bird is pictured here coming straight at us in the stern! 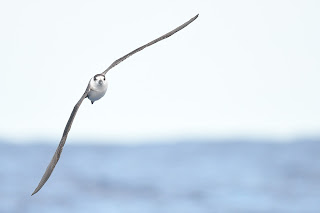 Dorsal view of a Black-capped Petrel 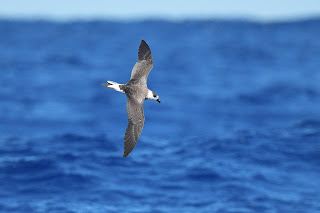 And while not the sharpest image, I love seeing the feather in the bill of this individual! 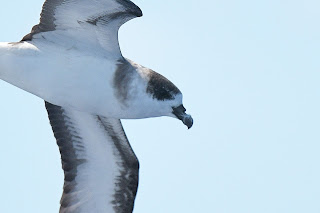 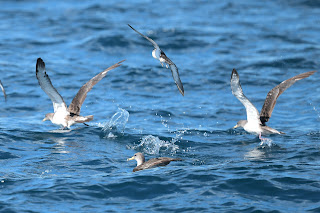 And though the light was tough and super bright at times over the course of the day, I got at least one nice diagnostic image of a Great Shearwater 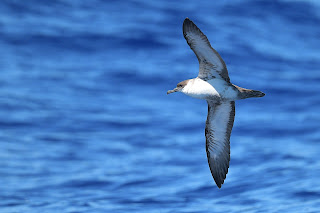 Here is one of the Audubon's we found on the shelf in the afternoon. You can see the white face and long tail on this small black and white shearwater! 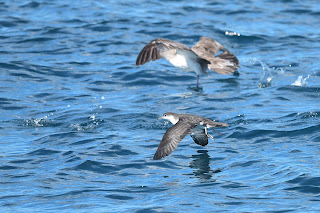 And oh the Wilson's! They were pretty cooperative for us photographers especially for a day with such large seas! 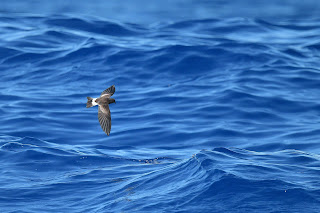 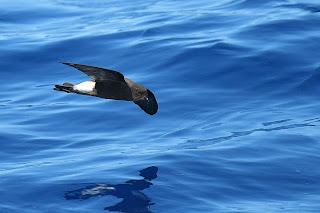 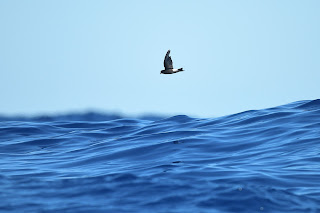 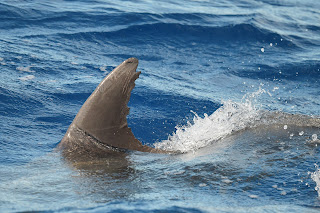 And some images of the Sailfin Flyingfish (Parexocoetus hillianus) whose colors are a bit more teal than other species we find offshore from Hatteras and today perfectly matched the water they were in! 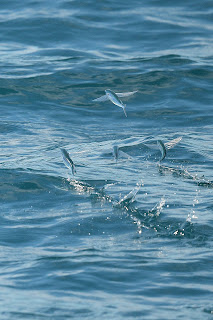 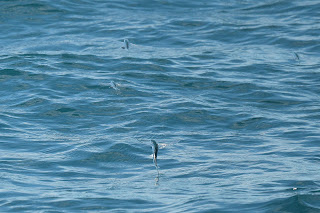 Posted by Kate Sutherland at 1:43 PM