Spring 2013: A Recap by Brian Patteson

Another Spring Blitz is behind us, and unlike some years, I've actually had a little time to reflect on it and to think about how it went in comparison to other years.  I have run spring pelagic trips from Hatteras for 20 years now, so there's a bit of history behind the current operation.  It started with just a few trips in late May and early June to look for the "recently discovered" Trindade and Fea's Petrels off Cape Hatteras along with an assortment of other spring migrants which were either absent or occurred erratically on the summer trips, which were the norm back in the '70s and '80s.  The discovery of Bermuda Petrel here in the mid '90s and then European Storm-Petrel just a decade ago, added even more incentive for birders to take these trips and we have met the demand by running a marathon of daily trips on our own boat since 2006.  2013 was the seventh year on our current vessel, the Stormy Petrel II.  We ran 14 "open" birding trips this year from May 18 to June 9 with 11 consecutive trips May 24 to June 3.  In 2009, we ran 19 consecutive trips!  We also ran five private charters for birding June 5 to June 13.  This is the only time of year we run so many trips back to back, so it gives us a unique perspective into the daily changes offshore and the passage of several spring migrants and visitors.  Off Cape Hatteras the marine environment is constantly changing and the impact of the Gulf Stream current is of paramount importance to the seabirding here.  The Gulf Stream can bring new birds in overnight, but it can also take them way out to sea when it takes a queer turn, as happened to us this spring.  We began our season with a hard current (3 to 4 knots) running near the shelf break, but within days the current moved way out (another 30 or 40 miles) and did not return to the shelf break for a few more days.  It wasn't as bad as 2010 when the stream stayed way offshore for weeks, but it made for some tough birding just when it seemed to be getting quite good.  Nevertheless, we scrapped out a good spring.  Looking back, we did better with some species than I might have thought because I tend to remember more highlights than lowlights from past seasons!

Trindade Petrels were up, but still nothing like what we saw here in 2007 when we had some easterlies blow in the motherlode.  We saw at least five this spring, the most we've seen in the last six springs!  Fea's Petrels were only seen on two trips, the worst showing since 2010.  I think we would have seen more if we had more windy days.  This year, we actually had the longest stretch of calm weather I can recall for late May and such is not usually conducive to seeing gadfly petrels.  Black-capped Petrels were seen daily, but in low numbers, again hopefully meaning they were just somewhere else.  Large numbers were seen at the Charleston Bump during this period, so maybe we will get more of them here on our next trips.  After three years without a sighting, we did get a brief look at a Bermuda Petrel this year on June 3.  We saw Cahows annually for over a decade and numbers are increasing, so I'm hopeful we will see some more in the near future, hopefully close to the boat next time!

Over the course of the first 13 trips, May 18 to June 3, we saw over 800 Cory's Shearwaters, which is far more than what we usually see during that period.  Great Shearwaters did not show daily until May 30, which is about normal especially without any swell or easterly wind.  Sooty Shearwaters were scarce, but steady, and we saw them on nearly all of the trips we ran in May.  Manx Shearwaters were hard to come by this spring.  Audubon's Shearwaters were seen in decent numbers but their abundance seems hard to gauge because it is so tied to the sargassum and wind direction.  I know we used to see a lot more of these birds 20 years ago.

Storm-Petrels were a mixed bag.  Overall, we saw modest numbers of Wilson's but only about 350 over a four day period in late May when we would have expected three or four times that number.  Band-rumped Storm-Petrels were seen on nearly all of the trips in slightly above average numbers.  Almost all of these appeared to be molting, winter-breeding birds.  Leach's Storm-Petrel, which is a bird of the easterlies was seen in low to modest numbers this spring and not on as many trips as some years.  For the first time since 2004, we did not see a European Storm-Petrel this year.

We only saw three tropicbirds this spring.  Two Red-billeds on May 22 and a White-tailed on May 28.  Had the Gulf Stream not gone out to sea the last of May, I think we might have seen a few more.

South Polar Skua was hard to find this spring, but this is usually the case in the absence of strong east winds.  We saw just a couple, one of these fairly close to shore.  Pomarine Jaegers were seen on nearly all of the trips, but never in large numbers.  I was surprised we saw as many as we did, given the weather, but maybe this is an artifact of recent breeding success, since most were one to three year old birds.  Long-tailed and Parasitic Jaegers were also seen in decent numbers, considering the conditions, again mostly younger birds, which is typical of the season.

Terns were a mixed bag this spring.  We always see a few Common Terns offshore and we did again this spring.  Seeing Arctic Terns is usually dependent on the conditions and we did not really have the right weather to expect much from them.  Nevertheless we saw them on five of the first 13 trips.  There were a number of first summer birds, so it was good to see some survival there.  Bridled Terns are a hit or miss bird in the spring.  Seeing them depends not only on the state of their preferred habitat - the Sargassum community - but also a certain amount of perching material in the way of flotsam.  This spring we saw them on nearly half the trips, which is pretty good considering this thier breeding season and we were seeing immature birds.  We only saw Sooty Terns on one trip, during a day with a stiff southerly wind.  There have been many springs without any Sooty Terns here.

A bonus on these trips is seeing some other intersting sea life including marine mammals, sea turtles, fish, and invertebrates.  Considering the calm conditions we had in late May for several days, we did not do quite as well with cetaceans as I thought we might have, but the Gulf Stream was doing some weird shifting at the same time, and we quickly went from a period of ripping current at the shelf break to no current, even way out in the deep.  We did better with Short-finned Pilot Whales than we have in most years, seeing them on over a third of the trips.  Bottlenose and Spotted Dolphins were seen on about half of the trips.  Mostly the Spotted Dolphins were in shelf waters and the Bottlenose (excluding those around the inlet) were out past the break.  Beaked Whales were scarce considering the sea conditions.  We only saw one Cuvier's Beaked Whale and we had just a few encounters with Mesoplodons, presumably Gervais' Beaked Whales, mostly at considerable distance.  We saw a Sperm Whale one day over 40 miles offshore.  They have not been much closer in recent years.  False Killer Whales made a showing one day in shelf waters.  I heard some chatter on the VHF radio about Pilot Whales in 20 to 30 fathoms (which never happens here) and we chased down the report during the afternoon and had a visit with the sleek and energetic Pseudorcas on our way home, less than 20 miles off the beach.  Non-mammalian sea life included a Leatherback Turtle on May 22, several Loggerheads, some Hammerhead Sharks, some Dolphin (or Mahi mahi), and a magnificent, free swimming Blue Marlin on May 18.  We also saw many more Portuguese Men of War than we typically find in spring.  Sampling the Sargassum with a dip net was interesting as well.  On June 5, we got lucky and found a Sargassumfish in one dip.  We also had a good time watching a small school of Ocean Sunfish the following day, not a common sight here when the waters are warm.

For anyone who has taken more than a couple of these trips with us in the spring, it is readily evident that running the spring blitz, as we call it, is not a small undertaking.  We run early and hard.  We don't miss many trips on account of weather.  And it is absolutely essential that we are constantly vigilant because day makers can happen almost any time when we are in, or near, the Gulf Stream and then just as soon again, we might be in a birdless desert.  Therefore we rely on a team of spotters and guides, most of whom have many years of experience working with us on the Stormy Petrel II.  Once again we were fortunate to have a lot of old hands aboard and also some new helpers.  This spring, special thanks go to Bob Fogg (14 trips, including a couple of charters), the famous Steve Howell (ten trips), Todd McGrath & "Big Dave" Pereksta (seven trips), Dave Shoch - a friend going back 25 years (six trips), and Nick Bonomo (three trips).  On May 18, we had some help from Nate Dias, who also brought us some good chum.  On June 9, we had a greenhorn crew of NC birders - Scott Winton, Jeff Lemons, and Ali Iyoob;  I wish there had been more birds to see that day: Tropical Storm Andrea ran most of them out, but brought us a Brown Booby.  Longtime friend Michael O'Brien brought us a small  group for some chartered trips on June 5 and 6.  It was great to have Michael on the boat;  we did a lot of trips together back in the '90s.  Another old Patteson regular from years past, George Armistead, brought a group on June 10, 12, and 13.  Along with George, we had Alvaro Jaramillo out from California, where he runs some pelagic trips, and NC's Nate Swick.  Thanks to all of you guys, and especially to Kate who always goes far and beyond what even seems possible when we get going on this marathon.

I'm not sure what the summer will bring us, but I eagerly await our next trip on July 6.

& some people pictures, thanks Steve...

Kate & Brian in the wheelhouse on the way out. 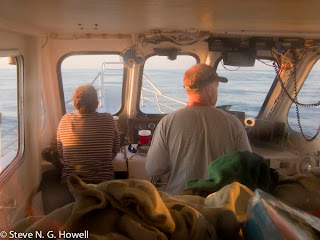 Dave Shoch & Ray Wershler who was with us for many, many days...!! 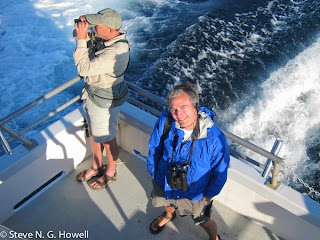 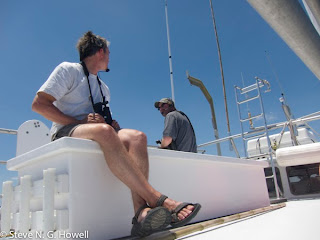 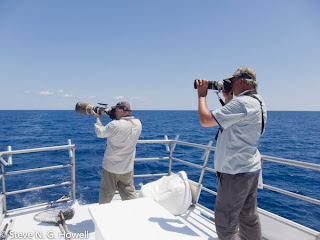 One of the calm, May days...
Bob Fogg & Dave Shoch in the pulpit.
& me, Kate, preparing our day's chum in the stern with Bob Wallace observing... 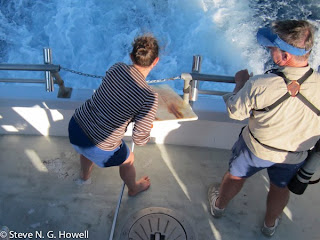 Posted by Kate Sutherland at 7:31 PM