It's been a few years since we've had a trip in late September, but not because it is a subpar time for birding in the Gulf Stream here.  It just seems hard to round up a crowd to come down here after August, with all the other birding going on - warblers, shorebirds, hawk migration...  And there has been the occasional hurricane to mess up the whole fall every once in a while.  But so far things look good for this month.  It's been a tough spring and summer for us with so much rainfall and aberrant green water conditions offshore but things are starting to look up.  We've had better water with good numbers of birds starting last month and a good showing of Trindade Petrels, which also began in August.  We have not run a trip here since August 25 because of other commitments with the boat, and we are itching to get back out there.  Therefore we have added a trip from Hatteras on Saturday, September 28*, with either a weather date or a second trip following, depending on interest.

Five years have passed since we've had a mid or late September trip and the last few we ran were quite productive.  Notable sightings from those three trips alone included Trindade Petrel, Fea's Petrel, Bermuda Petrel, and Sabine's Gull.  Over the years (and less than ten trips!) we've tallied a list of twenty pelagic species here in mid to late September.  That includes all five shearwaters and all of the jaegers.  We've seen the occasional tropicbird and the occasional booby.  Black-capped Petrels are expected and should be looking less scruffy than last month as their molt progresses.  Of course the real excitement is just not knowing what might show up.  Maybe a White-faced Storm-Petrel or better yet a Barolo Shearwater, a species we've yet to see here, but occurs annually in the Gulf Stream off New England in late summer.  Maybe another Cape Verde Shearwater among the Cory's.  And there is the fifth Pterodroma - Zino's Petrel.  Zino's should be dispersing from the breeding grounds and it seems quite likely we had one here on September 16, 1995 on a trip from Hatteras.  At the time it seemed too far fetched, but recent at sea observations of Zino's off Madeira has resulted in progress on the field identification of the species.  Eighteen years ago, most of us were hand-focusing with grainy slide film and third party lenses. 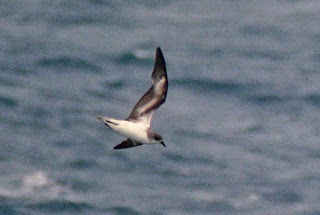 The bird appears to have a fine bill and the paler underwing and molt are consistent with Zino's.  Anyhow, Zino's is a long shot mega-rarity in the western North Atlantic, but we won't find it if we don't get out there looking.  Hope some of you can join us this September.

Brian Patteson
(Information about signing up for the trip is on our website http://www.patteson.com/ ) 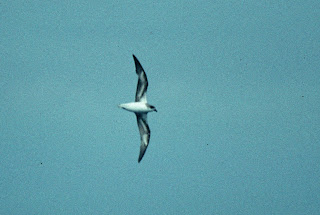 All three photos were taken on the September 16, 1995 pelagic trip from Hatteras. 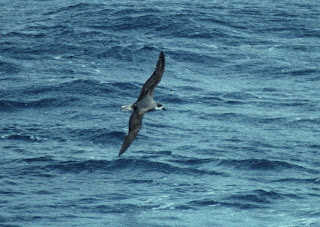 Photos copyright Brian Patteson, please do not use without permission.
*update 9/20/2013 - we will be running trips on September 28 & 29!
Posted by Kate Sutherland at 12:51 PM No comments: