The Gulf Stream current was pushed offshore Friday morning, so we headed out to the south thinking we might find some and ended up being able to just cruise around all day without worrying about being swept up to the north.  In turn this meant that the water we found out there was more blue green than the nice, blue Gulf Stream water, and the birds were scattered around.  Saturday we found a better condition out there with Sargassum scattered out to the deep and its associated life.  Our birds of note for the weekend were both dark with light bellies and neither stuck around for a leisurely study!  Friday morning on our way out to the shelf break, an adult Brown Booby flew right up the port side of the boat, crossed ahead, and flew directly away from us off the starboard bow!  Quick, but seen well and I was able to get at least a record shot! 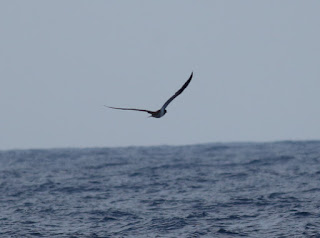 On Saturday morning as we were heading toward a distant flock of tropical terns a group of Black-capped Petrels flushed from the water on our starboard side, a handful of the birds flew ahead of the boat into the sun glare.  As they passed the bow, Brian saw what looked to be a light morph Trindade Petrel in the group.  We gave chase and the flock of Black-cappeds zig-zagged all over around us, flying in and out of the glare at the same time we were trying to get participants on the smaller gadfly among them.  Not quite the way we like to have it play out, but an excellent sighting all the same!

Black-capped Petrels were scarce on Friday, but they were around on Saturday and even responded much better to the chum!  Shearwaters were a bit scarce both days, but on Friday we found a nice group of feeding Cory's, Great, and Audubon's shearwaters under a very dynamic flock of Sooty Terns.  All three species were a bit more cooperative with the chum and for photos on Saturday, but could not turn up a nice, classic Scopoli's for the weekend.  There were a number of Cory's type shearwaters that looked like good candidates, but none with well marked underprimaries.  We did see some nice Atlantic Cory's (borealis)! (photo Kate Sutherland) 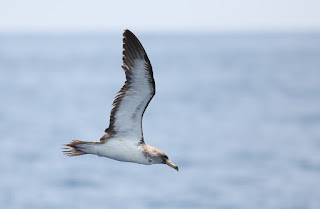 Our storm-petrels were a bit scarce and while we expect the numbers of Wilson's to be winding down as the summer progresses, it should still be a nice time to find some Band-rumped Storm-Petrels out there, but perhaps they were out in that hotter water this weekend!  We did see them on both trips and a few came in quite well!  Red-necked Phalaropes just began showing up this past week according to Brian, and while we saw them on both days, we had a flock that allowed close approach on Saturday.  (photo Kate Sutherland) 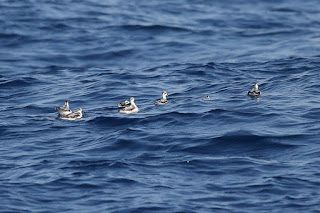 The tropical terns also did not disappoint!  Bridled Terns flew right by the boat on Friday morning and Sooty Terns came in well or were approachable on each trip.  Friday we had the feeding flock of shearwaters with over 20 Sooty Terns feeding with them, when we first approached this group there were also a handful of Bridled Terns there as well!  Saturday we found one Sooty Tern feeding on small fishes in the Sargassum, the show it put on for us was spectacular!  Swooping down to the water again and again, then flying right past us, seemingly curious about what we were doing edging in on its meal. (photo Kate Sutherland) 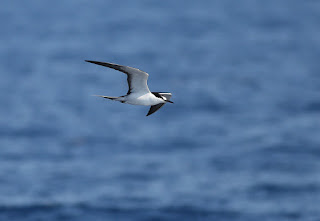 Westerly winds brought some other interesting creatures offshore and we saw dragonflies and moths out there both days, with one Monarch flying by offshore on Saturday! (photo Kate Sutherland) 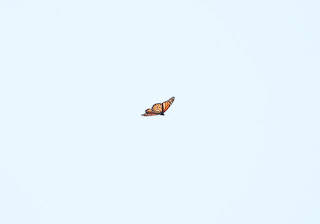 Atlantic Spotted Dolphins visited us to ride under the bow both afternoons on our way back to the dock, and a shark checked out our chum slick on Saturday afternoon in the deep!  Looking over the photos of the dorsal and caudal fins, the most likely candidate is a shortfin mako, but I will send it off to someone who knows more about sharks than I do for a final identification.

Thanks to everyone who joined us out there, we had a really nice mix of new and returning participants on each trip.  Another huge thank you goes to Kyle Kittelberger and Ed Corey for helping us to lead the trips, and to James Coleburn for helping me on the deck on Friday. 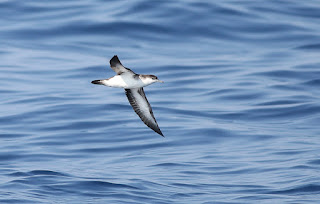 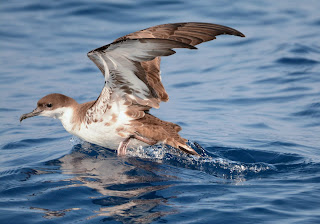 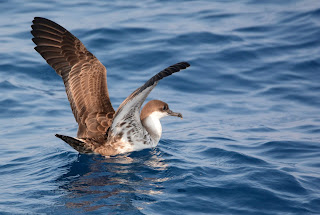 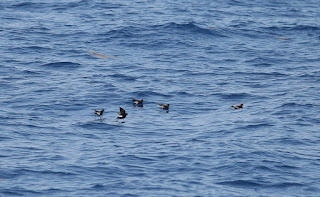 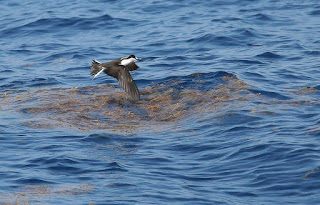 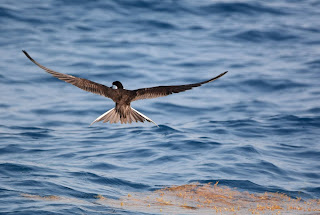 This young Laughing Gull came in to the slick when we were offshore.  (Kate Sutherland) 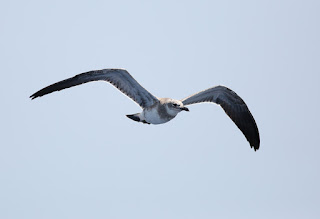 & a photo of the shark, the pale and smoothly rounded (not pointed) dorsal fin plus lunate caudal fin both point toward shortfin mako (Kate Sutherland) 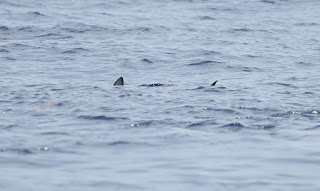 Of course we found some Oddspot Midgets out there too! (Kate Sutherland) 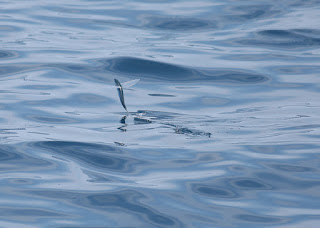 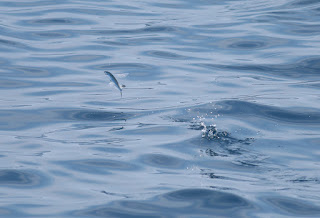 Posted by Kate Sutherland at 5:59 PM No comments: