December 28th was to be the date for our last trip of the year, scheduled to give Yve Morrell and Reuben & Victor Stoll a chance to add Great Skua to their Big Year lists, but the forecast for Thursday was grim and a couple days before we were to go, Brian made the decision to push it back to the weather date of Friday.  Excellent decision as the seas were settled after the gale force winds that visited them on Thursday!  The Gulf Stream waters were smoking as we headed offshore 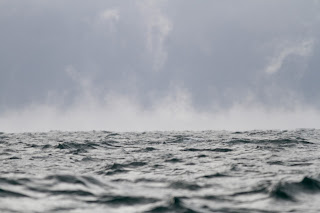 and we were able to check out this warmer water (68.5 degrees vs mid 50s inshore), but it held little more than a few hammerhead sharks.  Surprising, as typically these temperature breaks are good for some life, Boneys, phalaropes and maybe even a puffin.  Some days we can even turn up a tubenose like a Northern Fulmar or a Manx Shearwater, but not today!  It was a bit quiet.
After cruising around north of Diamond Shoals with our attendant gull flock for most of the morning, we headed back to the shoals.  A little after 1:30, Ed Corey started shouting "skua, skua, SKUA!!!!" and everyone rushed to catch a glimpse of this dark pirate of the seas as it flew by, deliberately searching for a candidate to harass as gulls quickly dispersed.  I did not see the bird as it came down the port side, but many were in place to have a good look, including Yve, Reuben, & Victor!  It flew off ahead of us, and while we hoped it might sit on the water for us to relocate, no such luck was had.
As we headed back to Hatteras Inlet, we did turn up two Iceland Gulls (kumlieni) that were very cooperative behind the boat flying close for excellent photo opportunities!  One was a crisp looking first winter bird 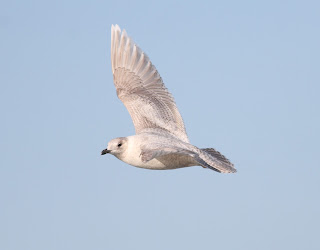 and the other an adult, something we don't often see here from Hatteras very often! 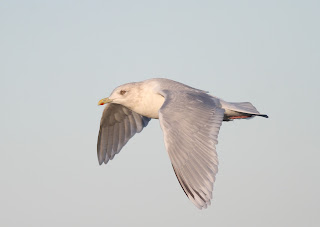 Overall it was a great day out there with good numbers of Lesser Black-backed Gulls along with the usual Herring and Great Black-backeds.  We turned up a few Bonaparte's Gulls, young ones and adults, plus a handful of Ring-billed Gulls and even a couple of Laughing Gulls!  The Northern Gannets put on a nice show at the end of the day, diving behind the boat and feeding nearshore. 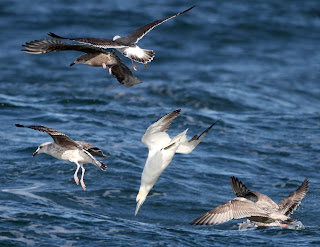 We had all age classes, and a nice showing of younger birds!  Alcids were not as cooperative and we saw just a handful of Razorbills with only one young individual landing near the boat for a quick view before it dove and eluded us.
The non-avian encounters for the day were quite spectacular with two Humpback Whales breaching in the morning offshore of Avon.  They allowed us to approach for some incredible views of these awesome whales!  Loggerhead turtles were out in good numbers as well, and I imagine had the conditions been a bit calmer, we could have seen many more!  Most were nice, large adults on the surface near the boat. 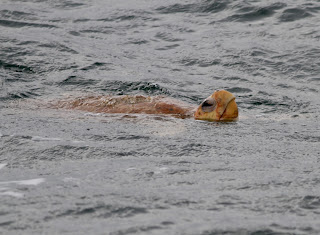 We had good numbers of Bottlenose Dolphins and even saw what could have been some Spotted Dolphins in the warmer water in the morning.  It was so nice to get offshore and we are looking forward to a good series of winter trips aboard the Stormy Petrel II in 2018!  Check out our schedule here and join us for one!
Thank you to our leaders today, Jeff Lemons and Ed Corey, they worked really hard to get everyone on what we found.  Thank you also to our Big Year Birders and everyone who joined us - we could not run these trips without you!  All photos today are by Kate Sutherland.

A few more photos of the Iceland Gulls: 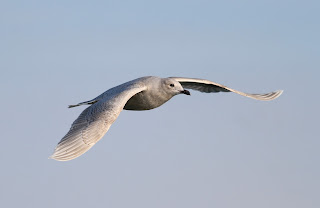 First winter, you can see the small, delicate looking bill in both of these images. 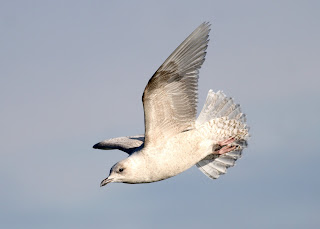 The adult bird had a compromised lower leg leaving it with a useless looking foot. 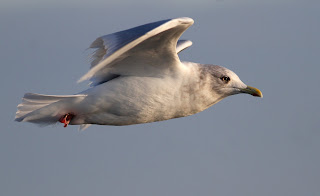 It was nice to see so many first winter Gannets! 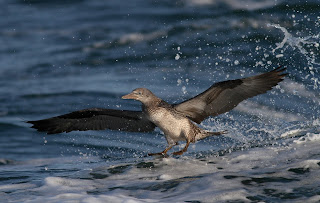 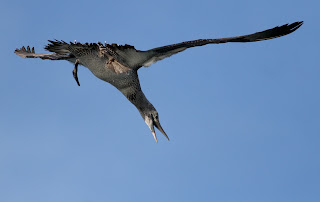 We had a pair of Red-breasted Mergansers fly right by the stern!  Here is a photo of one of them... 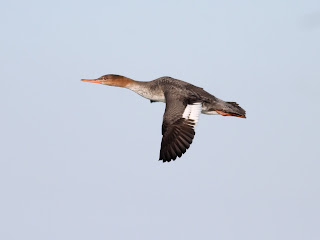 A nice adult Lesser Black-backed Gull - we had great views of all age classes! 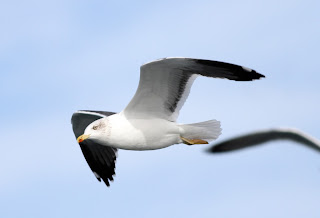 Laughing Gull that flew by offshore 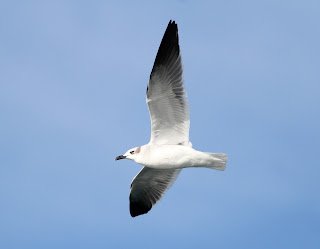 A photo of the flock near the end of the day!  The Great Black-backed Gulls in the center with Herring Gulls - one battling a Brown Pelican in back and a glimpse of the adult Iceland Gull's wing tip on the right!  I always enjoy the antics of the feeding flock! 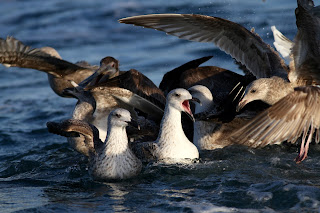 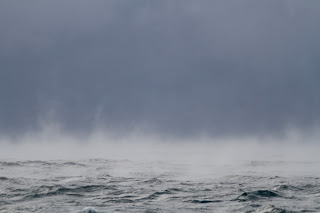 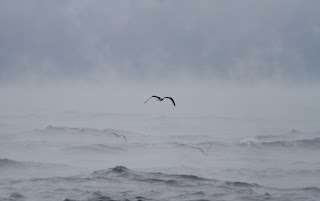 Posted by Kate Sutherland at 3:40 PM No comments: