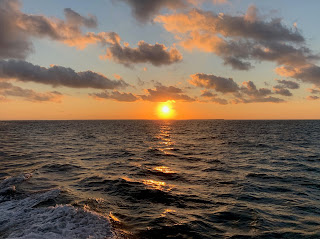 The forecast for the weekend changed a number of times in the week leading up to our trip on Saturday!  At one point, I wan't sure we would make it on either day.  Things calmed down, though and after a strong front moved through on Friday we had calm enough seas to head offshore on Saturday morning.  The day was incredibly clear with winds about 14 to 16 mph from the north northeast.  Northern Gannets and gulls were around inshore and we even had a quick glimpse of a distant small jaeger, perhaps a Parasitic, on our way to the shelf break.  At the break there wasn't much activity so we kept moving offshore for a bit before we started the fish oil drip.  A Cory's type Shearwater and Wilson's Storm-Petrel were our first tubenoses of the trip, but they were not super close.  Following them we had our first look at a Great Shearwater. 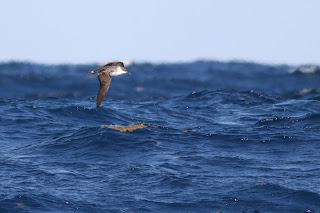 Overall seabirds were a bit scarce, but we were surprised to find more Wilson's Storm-Petrels out there than we've seen since August!  A small flock flushed from the water as we motored past them, flying over to feed and follow in the slick for a bit.  On a day with a fair bit of swell and some wind waves, it was a treat to show everyone aboard these dainty seabirds that should soon be nesting on sub-Antarctic islands! 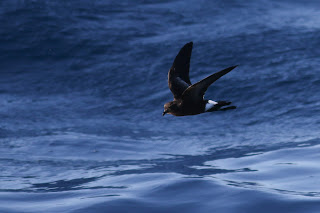 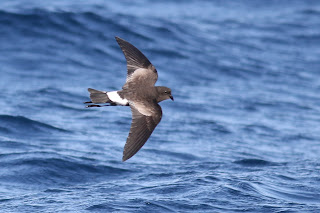 Unfortunately our two Gulf Stream specialties, Black-capped Petrel and Audubon's Shearwater were scarce.  We were lucky to have one Audubon's fly across the bow in the morning and then just two more flew by in the afternoon.  One fairly white-faced Black-capped came in to check us out, but that was the only close pass we had.  At least one other was flying around out there at the same time, and one of our participants thought they had one earlier in the day.  So just a handful for each of them.  But we will note that the Gulf Stream waters were a bit atypical with more of a greenish tint than usual and without much current.  The temperatures, however, were in the high 70s so perhaps we were in an eddy of some sort, who knows? 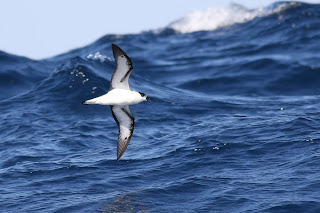 As fall moves on more gulls are joining us offshore and we had Great Black-backed, Lesser Black-backed, and Laughing Gulls out there in addition to two Black-legged Kittiwakes that gave us fleeting glimpses!  Each of them flew up into the stratosphere, though, with the high ceiling we had out there.  Offshore Bottlenose Dolphins and Atlantic Spotted Dolphins gave us quite a show offshore and closer to the beach.  In addition to these charismatic megafauna, we also had two ocean sunfish (Mola mola) the second of which swam right under the bow of the boat! 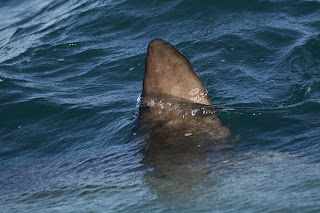 After trying to describe them to participants in the morning when we just saw a fin, it was awesome for everyone to have the chance to see the whole animal!  We also saw at least one hammerhead shark and one large Loggerhead Turtle on the way in that afternoon.
Maybe not the seabirdiest day out there, but you certainly won't find them if you don't go looking!  Thanks so much everyone who joined us and made this trip possible, we couldn't be out there without you, and thank you also to Brad Sale for helping us out!  All of the photos for the post were taken by me, Kate Sutherland.
Target Species List November 14, 2020
Black-capped Petrel - 2 to 4
Cory's type (Atlantic / Scopoli's) - 3
Great Shearwater - 6
Audubon's Shearwater - 3
Wilson's Storm-Petrel - 25 to 28
Black-legged Kittiwake - 2
Pomarine Jaeger - 1
Jaeger species - 1 prob. Parasitic
Other Species Offshore of the Shelf Break
Common Loon - 1
Great Black-backed Gull - 2
Herring Gull - 5
Lesser Black-backed Gull - 1
Laughing Gull - 1
Offshore Bottlenose Dolphin - 31 to 32
Atlantic Spotted Dolphin - 5
Loggerhead Turtle - 1
Hammerhead species - 1 (likely Scalloped)
Ocean Sunfish (Mola mola) - 2
Posted by Kate Sutherland at 5:33 PM No comments: