Friday's trip was not on our regular schedule because it was a chartered trip for a group from Ohio.  While we did not have the wind shift like we had last weekend, the swell was southeasterly and the winds were light west, southwest...it was a calm day out there!  This meant we could see for miles, but also meant that birds were sitting around or flying very close to the water.  Fortunately for us the southerly winds of the week preceding the trip brought the tropical terns up this way so we found Sooty and Bridled Terns just inshore of the shelf break feeding with Black and Common Terns.  A few of the Bridled Terns flew right in to check us out, so we got incredible views of an adult accompanied by its begging juvenile (photo by Kate Sutherland)! 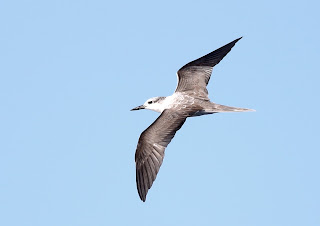 Black-capped Petrels were either sitting around or flying low, so they were difficult to get close to, but we had a few fly right by the boat - excellent views!  We had some Cory's and Audubon's Shearwaters, both were near the boat over the course of the day, and while Wilson's were scarce, we did have a few come to feed on the chum also giving us a chance to check out these "water walkers".  There was some flotsam out there as well and with just a small amount of current, we were able to maneuver around to check it all out!  Just after 1, Brian spotted a tree ahead of the boat...as we got closer, he saw there was a dark tern on the rightmost branch (photo by Kate Sutherland)! 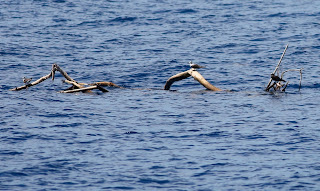 There were a couple of Bridled Terns perched there as well, but as we slowly approached, it was obvious there was a noddy on the tree!!  It turned out to be a Brown Noddy, too tired to take off even as the tree nudged the stern of our boat as it drifted past!  This floating ecosystem had obviously been in the water for some time as it was populated with barnacles and had some huge tripletail and other fish species swimming below, as far down as we could see!  Not a bad place to perch for a bit!  It was awesome to spend time with this bird, and see all of the detail in the face and feet (photo by Brian Patteson)! 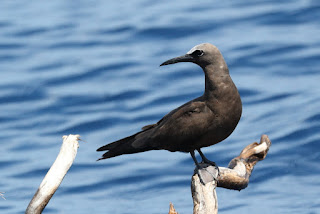 A little under an hour later and three miles inshore, I spotted a flock of terns circling up ahead of us that had a dark bird with it.  Brian got us up into the flock and there was another Brown Noddy feeding with a flock of Sooty and Bridled Terns!  Wow!!  This bird was flying close to the water and soon disappeared from view as we spent time among the terns and shearwaters.  What a show!  We had a Scopoli's Shearwater with two Audubon's feeding directly with the Sooty Terns, it was a great end to our time beyond the shelf break (photo by Kate Sutherland)! 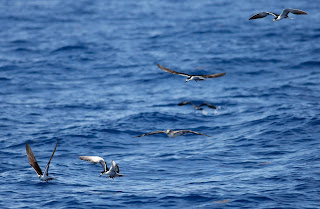 On the ride back inshore, we found a flock of Red-necked Phalaropes on the water right on a color change.  These birds were a bit skittish, but we were able to circle around and get some nice views (photo by Brian Patteson)! 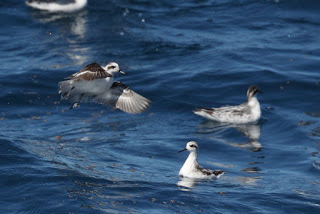 It was an incredible day out there!  Late summer off of Hatteras is always an interesting time!  Our next trip is next Saturday, September 8 (obligatory weather date of the 9th), let us know if you'd like to join us!  My email address is cahow1101@gmail.com (-Kate)

Another close up view of the Brown Noddy (Kate Sutherland) and those feet!  They look like they should be on a booby! 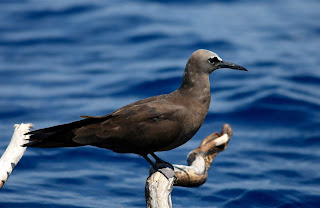 If you use your imagination, you can see there is a large tripletail just under the water at the bottom of this photo!  There was an amazing collection of fish with this tree!  (Kate Sutherland) 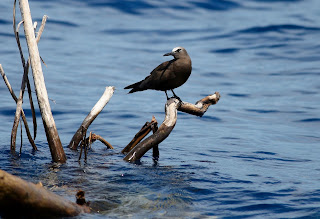 Brian Patteson captured these images of the Bridled Terns that were perched with the noddy on the tree, there was an adult (top) and juvenile (bottom) 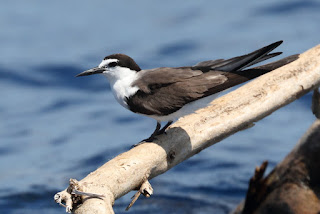 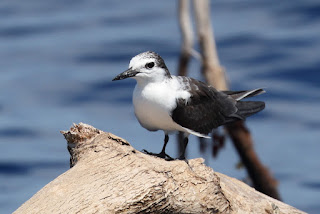 The terns took off as we drifted closer to the tree, here is the adult Bridled Tern coming back in and checking out the noddy! (Kate Sutherland) 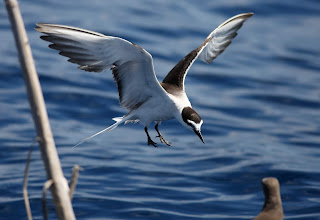 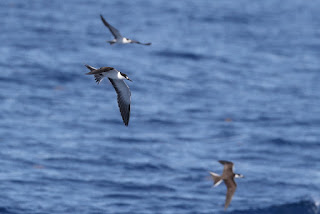 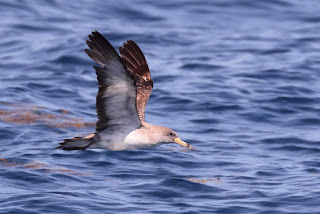 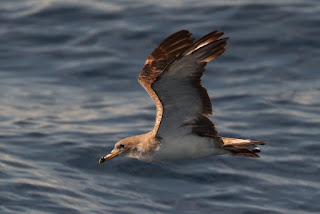 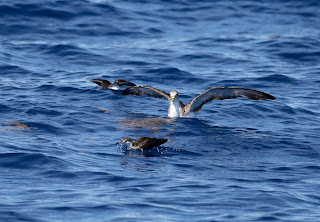 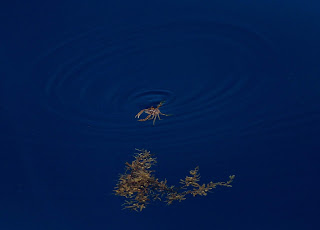 We also encountered a pod of offshore Bottlenose Dolphins, this one was playing with some sargassum! (Kate Sutherland) 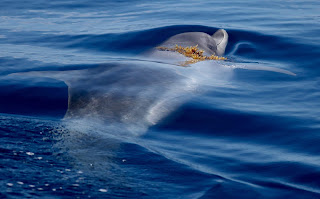