Our hopes were very high going into our trips over the weekend, winds had been marching across the Atlantic all week!  Who knows what they might carry over to us?  We met at the dock Saturday morning, Brian checking the conditions offshore one more time before heading out, and the wind and waves were much higher than forecast.  So we made the decision to cancel Saturday and try for Sunday!  It was the right choice, we watched the weather reports all day and it was not anything we should have been out in!  Sunday there was still some wind, but not quite as much, and we headed out with a few clouds in the sky.  Typically the shelf waters are pretty dull in terms of bird life, but Sunday morning we found a flight of Cory's type Shearwaters and a couple of feeding flocks!  We took the time to check these out and had incredible views of adult and young Sooty Terns plus Cory's, Great, and Audubon's Shearwaters.  A few Black-capped Petrels even put in an appearance before we reached the shelf break! (Chris Thomas) 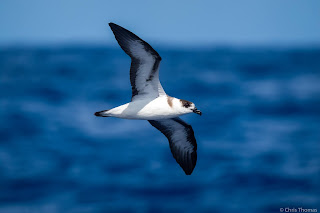 Life offshore and out to about 500 fathoms (3,000 feet) was pretty exciting as well with Black-capped Petrels attracted to the chum, by late morning we had up to fourteen following us!  They made some incredible passes and we saw both light and dark faced birds, plus a number that were in between.  Great Shearwaters also fed well in the chum and at times we had them just about flying over the stern!  Seas were quite large when the wind waves and swell hit the warm, fast moving Gulf Stream and this allowed us to really get a feel for what it means when birds "ride the swell!"  Tubenoses would appear then drop down in the trough and just disappear!  Frustrating, but also incredibly cool to see!  At one point we had a small Calonectris shearwater fly by that we thought might be a Cape Verde Shearwater, but photos showed a more yellow bill than we think one would have and the dorsal coloration was also not quite right for CV...so it was more likely a Scopoli's.  We also had some high flying birds in the distance that we gave chase to, one turned out to be an Osprey and perhaps the other was as well, we were just unable to gain enough ground to get a good look!  Another Osprey dropped in later in the afternoon and we had some young Lesser Black-backed Gulls (Ed Corey) and a young Herring Gull also visit us offshore. 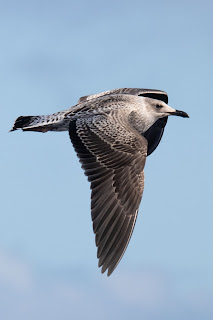 Brian had reports of hundreds of shearwaters on the shelf in the afternoon, charter boats were catching yellowfin tuna around them, so we headed back into the shelf waters to see what we could find!  And yes!  Hundreds of shearwaters, Cory's, Scopoli's, Great, and Audubon's were around!  There was Sargassum scattered around that was full of life so the shearwaters were feeding on whatever they could find in there!  (Brian Patteson) 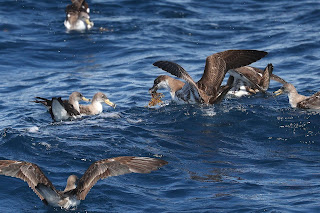 A Manx even turned up with these flocks, that was a nice bonus!  So while we didn't find the rarity we hoped for from across the Atlantic, we did have an awesome day!
Thank you to everyone who joined us to make this trip possible and a big thank you to Ned Brinkley, Ed Corey, and Jacob Farmer for helping Brian and I lead the trip!  Photos today are thanks to Brian Patteson, Ned Brinkley, Ed Corey, and participant Chris Thomas!  My memory card somehow became corrupted mid-day so I am very bummed to not contribute much in the way of photos.  While our next trip is full we added another to the schedule which is filling steadily - that will run on October 24 (obligatory weather date of the 25th).
Species List for September 13
Black-capped Petrel - 43 to 48
Cory's Shearwater (Atlantic) - 16 (verified by photo)
Scopoli's Shearwater - 17 (verified by photo)
Cory's type - 342 to 352 (not identified to species by photo)
Great Shearwater - 219 to 224
Manx Shearwater - 1
Audubon's Shearwater - 21 to 23
Wilson's Storm-Petrel - 2
Red-necked Phalarope - 1
Sooty Tern - 16
Bridled Tern - 1
Sooty / Bridled Tern - 2
Pomarine Jaeger - 5
Osprey - 2
Merlin - 2
Lesser Black-backed Gull - 2
Herring Gull - 1
Short-finned Pilot Whale - 8 to 10
Offshore Bottlenose Dolphin - 7
Unidentified Dolphin species - 2
Loggerhead Turtle - 2
Cloudless Sulphur - 2
butterfly species - 1
A few more Black-capped Petrel photos courtesy of Chris Thomas.  We saw some sharp looking white-faced Black-cappeds 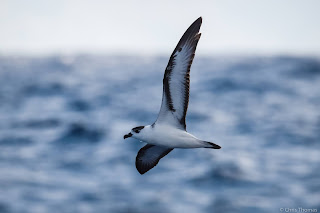 Some that looked darker, this bird has a large chest spur but the face is not incredibly dark, so more intermediate. (Chris Thomas) 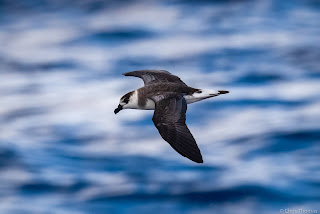 And another that looks more white-faced. (Chris Thomas) 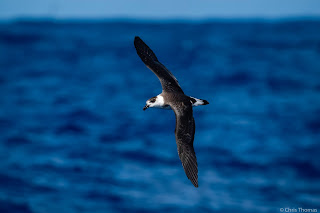 We had good views of both Cory's (Ed Corey) and Scopoli's (Kate Sutherland) Shearwaters over the course of the day! 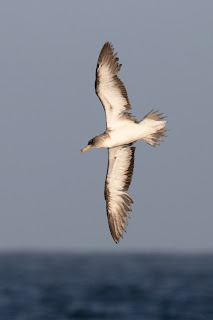 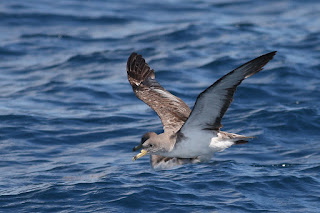 It can be interesting to see the variation in molt and feather wear this time of year in the Cory's type Shearwaters! (Brian Patteson) 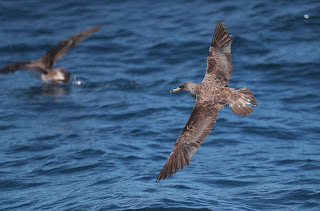 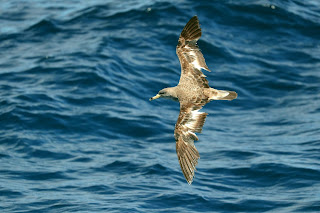 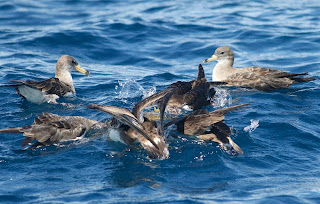 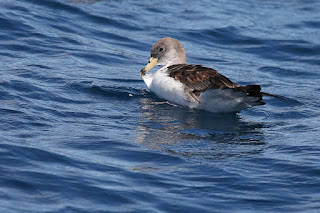 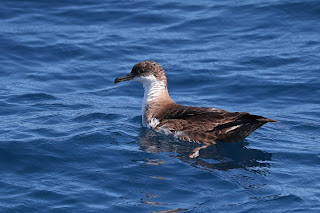 The Manx, seen here behind a feeding group of larger shearwaters (Brian Patteson) 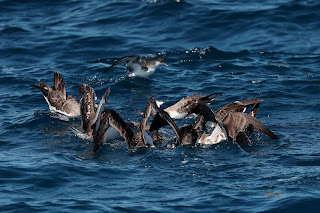 Audubon's were very obliging in the afternoon! (Ed Corey) 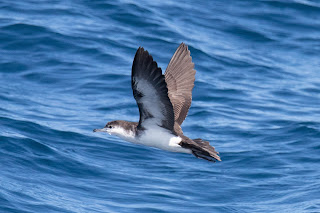 And we had some incredible photo ops of the Pomarine Jaegers that came to visit the slick offshore!  (top Brian Patteson, bottom 2 Poms with LBBG by, Ed Corey) 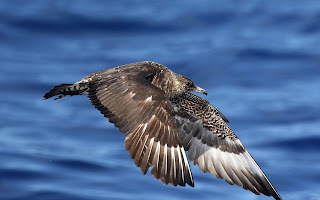 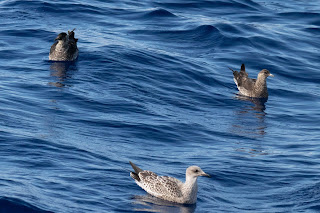 Somehow I captured a Cory's type with what looks like a young Loggerhead Turtle!  Scopoli's on the water observing and one flying by in the second photo as well!  (Kate Sutherland) 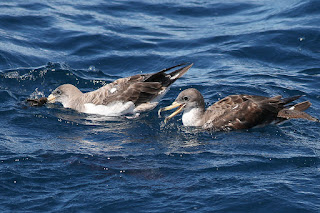 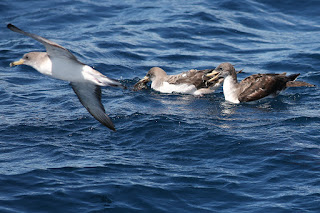 Posted by Kate Sutherland at 11:08 AM