Our final trip of the year was scheduled for December 29 with a weather date of the 30th, but as the date approached, the weather foiled our plans and it looked like the only day that would be manageable was Friday December 31...so we checked with those who had signed up and most were willing to go during the small window of opportunity.  We even garnered a little more support from our loyal NC birders!  The water offshore of Hatteras is still pretty warm and even north of Cape Hatteras the temperatures are in the mid 50s.  It seems winter weather comes a bit later every year for us and the winter species with it.  But we've found some good birds out there in December in the past and Great Skuas are likely around somewhere...so always worth a look for our Big Year birders!  This trip however, was a bit slow on the bird front and the only pelagic species we turned up were a nice flock of Red Phalaropes, a totally unexpected Black-capped Petrel, and a Manx Shearwater.  The gulls and gannets were quite cooperative in the chum and we had all age classes of Northern Gannet plus six species of gull.
After leaving Hatteras Inlet just after sunrise we decided to steam offshore, heading to Diamond Shoals Light Tower, then we headed north about 12 to 15 miles offshore of Hatteras Island - prime Great Skua territory!  There was a gorgeous blue / green color change just north of the light tower and this was where we found the Red Phalaropes. 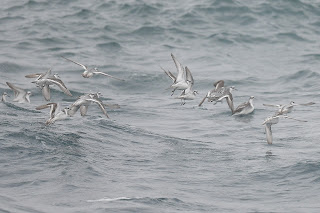 Hatteras local, Haley Rosell, brought a Northern Gannet with her that she had in rehab for a few days.  It had a sprained wing, but with medicine and rest she decided it was ready to go and wanted to get it out with us if possible.  She gave it the opportunity to return to life offshore on that same color change! 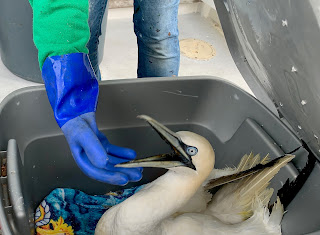 It was so cool to see one of these birds up close - they seem to be made of porcelain with indescribable colors around the eyes and on the tops of the feet.  This also happened to be where fog settled in around us...  Unfortunately fog makes birding difficult at best and we had to deal with it for a couple of hours.
Life in the water was bountiful and we encountered some playful, young Atlantic Spotted Dolphins, some hammerhead sharks, at least two large Loggerhead Turtles, and one very cooperative Ocean Sunfish (aka Mola mola) 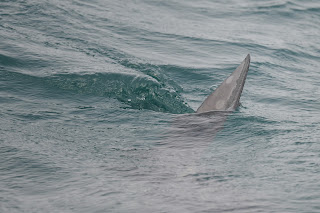 all north of Diamond Shoals.  As we approached the shoals nearshore for our trek back to Hatteras Inlet, Jamie Adams spotted a distant Black-capped Petrel!!  Just 6 miles off the beach!  WOW!  You just never know what you'll see - what a nice new year's eve gift for us!  Back south of the shoals we found that one distant Manx Shearwater.  While our search for the Great Skua was unsuccessful (we covered all of the places we've seen them in the past), it was a nice day out there and we were able to eke out a list in spite of the unseasonably warm December weather!
Thanks to everyone who changed their plans around to still make it offshore with us even though we had to change the trip date, it was a great way to end the year and the season!  A huge thank you also to Ed Corey and Steve Backus for helping Brian and I lead the trip - we'll see you in 2022!
(All photos today are by Kate Sutherland)
Species List for December 31, 2021
Black-capped Petrel - 1
Manx Shearwater - 1
Red Phalarope - 25 to 30
Northern Shoveler - 4
American Wigeon - 2
Northern Pintail - 18
duck species - about 20
Surf Scoter - 3
Surf / Black Scoter - 20 +
Long-tailed Duck - 2
Bonaparte's Gull - 10
Laughing Gull - 27
Herring Gull - 154
Lesser Black-backed Gull - 9
Great Black-backed Gull - 17
Royal Tern - 2
Common Loon - 8
Northern Gannet - 64
Brown Pelican - 1
Bottlenose Dolphin - 23 to 25
Atlantic Spotted Dolphin - 4 to 6
Loggerhead Turtle - 2
Hammerhead Shark (scalloped or Carolina) - 5
Spinner Shark - 1
shark species - 1
Ocean Sunfish (Mola mola) - 1
Young Northern Gannet, this bird fledged earlier this year! 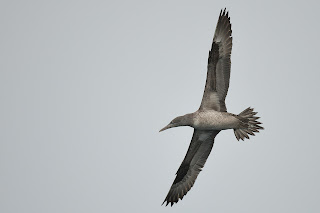 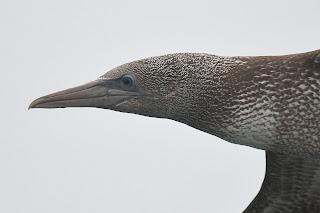 A third winter Northern Gannet in the fog... 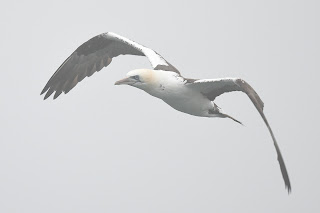 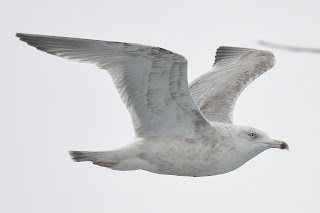 Gorgeous eye of an adult 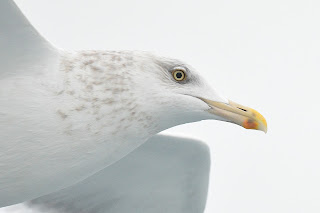 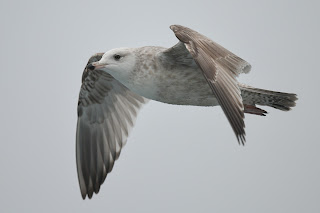 An adult with a Menhaden head! 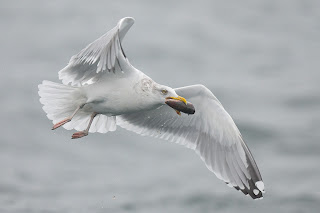 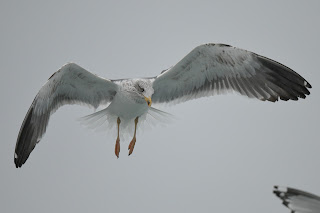