One of the toughest aspects of pelagic birding is the unpredictability of it all.  But in order for it to be a viable enterprise, the trips must be scheduled in advance and on a fairly regular basis.  So when we settle on a few dates for running trips, we go ahead and put the word out a few months ahead of time and hope for the best when it comes to the weather, water temperature, and, of course, the "target birds".  Pelagic birding would be nothing nowadays without the "target birds" for a particular trip or season.  Gone are the old days when most birders jumped at the chance to go to sea and find out what might be out there. By now, we mostly know what is likely to be around and we know what probably won't show if the water is too warm or too cold.  It is nice to have that knowledge, but it also puts a damper on things when you know the odds are stacked against you.  After four consecutive years with cold water off Cape Hatteras, some people had begun to think Dovekies were an expected winter visitor to NC coastal waters.  Well, they can be if the water is cold enough.  But Dovekies don't exactly come flocking to 60 or 70 degree water if there is no really cold water just inshore of it.  Since December we have seen fairly consistently warm water here off Cape Hatteras well inshore of the shelf break.  This trend has been in sharp contrast to the fall, when water temps inshore were rather cool, consequently, there have been few alcids - even Razorbills - which are often quite common here in winter.  On the other hand, it has been a good year for Great Skuas, one of the best ever.


When we put to sea on Saturday February 18, I was not exactly sure where we would find the warm water but I knew it would be in fairly close.  I had hoped to avoid it for a while by crossing Diamond Shoals, but I found warm water there just 3 miles off the beach.  This is usually a good place to see Razorbills, but instead we saw a small flock of eastbound Red Phalaropes crossing the shoals around 0800!  We did soon find cooler water on the north side, however, and a Manx Shearwater caused excitement when it appeared among a large number of Bonaparte's Gulls.  I decided to work northward in the cooler water, which was in the low to mid 50's;  I had seeing Razorbill and Great Skua in mind.  We had not gone far when a single Dovekie crossed the wake, heading rapidly to the east.  Knowing how Dovekies sometimes favor a temperature break, I headed offshore.  We did not make it out to that break before a Great Skua crossed our wake - northbound - right back there where we had come from!  I stuck with the plan and, after another skua sighting, soon found a temperature break and color change which held several Red Phalaropes and quite a few Loggerhead Sea Turtles.  We saw Loggerheads at point blank range frolicking next to the boat.  It was quite exceptional.  After a while we gave up on the change and headed back inshore.  We saw a distant skua and a disinterested Northern Fulmar.  I had expected more fulmars based on the last couple of trips.  There was a good showing of gannets closer to shore, with many birds raining down at times.  We saw another skua on the horizon off Avon.  Working southward we found the hot water again to the NW of where it had been earlier.  We saw a few Manx Shearwaters and Razorbills, but nothing close.  We saw more turtles than I have ever seen.  We were less than two miles from Hatteras Inlet when I heard the excited cry of "ALBATROSS!" from the stern.  I stopped the boat and went out on deck.  The bird had landed in the wake, so I ran back to the wheelhouse and turned back on our course.  Coming about, I was shocked to see an adult Black-browed Albatross sitting on the water among our following of gannets and large gulls.  It was not at all worried by the boat;  I went to the stern.  We were almost out of chum, but Kate had made sure we still had enough to keep a flock to the inlet.  She threw out a couple of scoops and the albatross came charging in to the stern, where he easily dominated the gulls and gannets.  It did not take long to finish up the chum, so we spent the next half hour enjoying the bird as it rested and preened alongside.  Thousands of photos were taken and a fishing party even came by to have a look at the giant bird.  Around 5:26 the albatross took flight and headed off the to the eastward, reminding us why pelagic birding (inshore seabirding in this instance...) is not so much about the target birds, but about the opportunity for discovery.


This Black-browed Albatross is one of just a few individuals documented in the Western North Atlantic.  There is one previously accepted sight record for North Carolina from August 19, 1972.  A congener, the Yellow-nosed Albatross, has been seen three times at or near Cape Hatteras, including one of our "pelagic" trips on February 5, 2000.  It was also seen fairly close to shore.


Thanks to everyone who came along, leaders and participants (Kate, Bob Fogg, Dave Shoch, Jeff Pippen & crew).  Leader Bob Fogg gets credit for the find!


Yes, a few photos of the Black-browed Albatross: 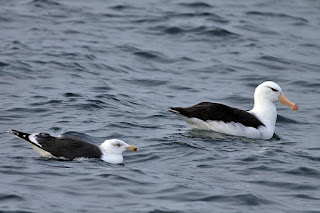 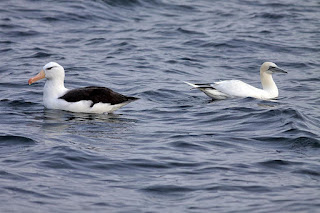 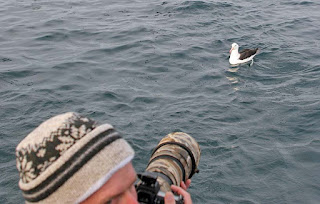 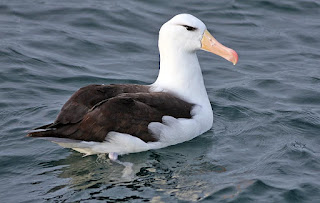 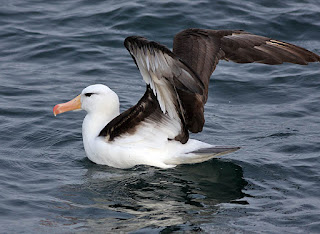 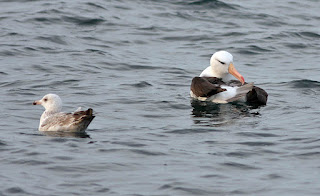 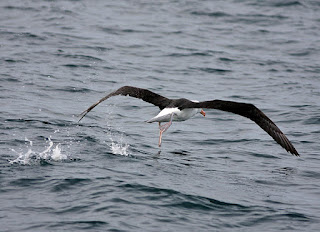 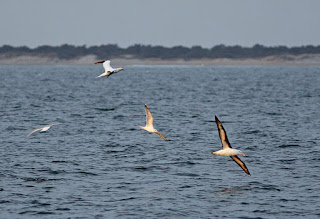 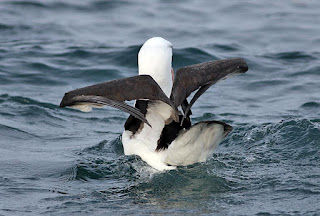 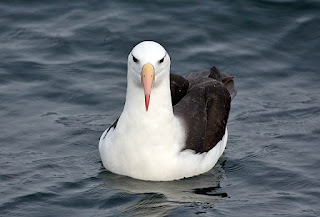 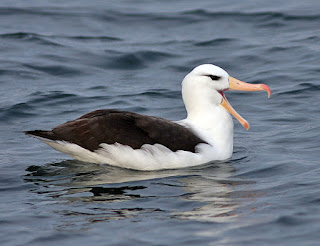 Amazing gannet sequence in the stern... 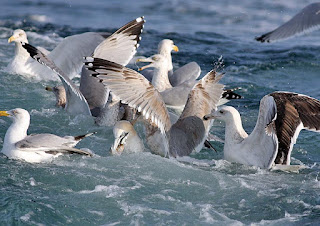 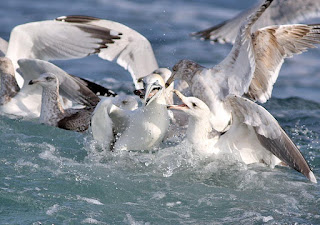 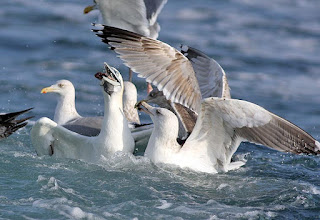 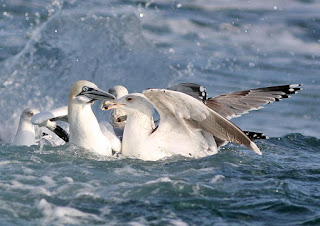 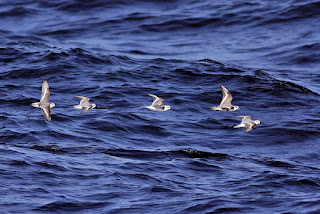 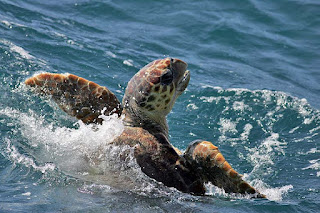 Posted by Kate Sutherland at 8:45 PM