After seeing the satellite photo for Feb. 10, I was a bit more excited about our prospects for the pelagic trip on the following day. It seemed that cold water had finally washed down below the Cape and maybe it would stay for a few days. Then clouds moved in and we could not tell what was going on until we left to find out first hand on Saturday morning. Light rain was falling before we left the dock and the wind, which was predicted to freshen to gale force by early evening, was still light. Unlike the previous weekend, we had a full trip, and everyone had high hopes for a Great Skua. I thought we might get lucky and score a Dovekie or Puffin if we could find a good change east of the Cape, so I headed out toward the shelf break for starters. It did not take long to find warm water. A lot had changed in 24 hours. Where I was hoping for 55 degree water, it was 65 to 70, so we never made it past 20 fathoms there. The first couple of hours out were rather dull, and the only pelagic birds we found were a couple of uncooperative Northern Fulmars. Working to the northwest, we did come upon a rough temperature break and some more target birds by mid morning. All of a sudden we were seeing Razorbills and more fulmars in this cooler water. A young Black-legged Kittiwake also trailed distantly behind the boat. There was a good showing of Loggerhead Sea Turtles, including an amorous pair. We found a small number of Red Phalaropes where the break was sharpest, going from about 60 to 70 degrees. Moving closer inshore, there was a steady procession of gannets, mostly moving northward on a broad front. This was where I felt we might find a skua, but we traveled for miles with no luck. As a consolation prize, a second winter Iceland Gull followed us for miles. Finally at 14:33, George Armistead spotted a skua moving off the port side at medium distance. People were able to see it, as it stayed in view for a while, but never charged us. Less than 20 minutes later, possibly the same Great Skua charged our flock of gulls and gannets, making one nice pass. This was in the same area where we had seen a pair of Bonxies last Saturday. The wind started to freshen and it got cloudier. By the time we had crossed Diamond Shoals, I was about ready to pack it in and steam to Hatteras Inlet. A nice flock of Bonaparte’s Gulls was feeding nearby, so I veered a few hundred yards seaward to check them out, hoping for a Little Gull. There was no Little Gull, but a nice flock of Red-breasted Mergansers was feeding there over three miles offshore! Then it was pandemonium when the brown bomber returned to have a go at our flock. It was the best Bonxie show in at least couple of years and many photos were taken. After the skua peeled off, we did vacate the area, not wishing to be on the water when the gale came on. A few minutes later, a skua did appear behind the boat and followed for a couple of miles. A Manx Shearwater also made a close showing in the wake for Kate and the others back there watching. We got back to the dock ahead of the front, and bunch of happy people disembarked the boat.

(By clicking on images you can scroll through them full screen) 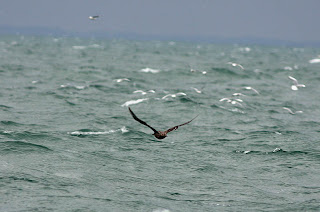 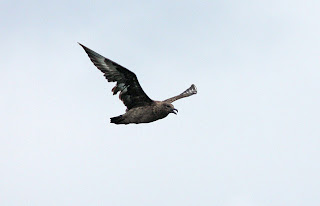 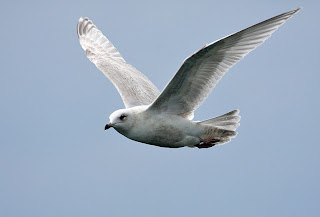 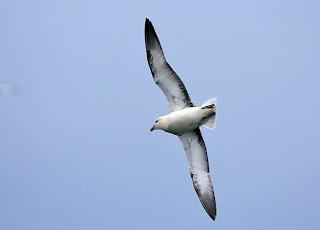 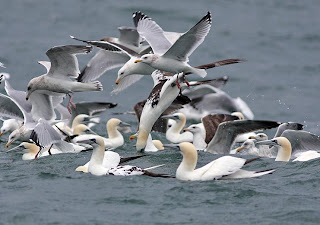 one half of the amorous pair... 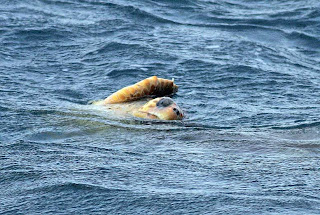 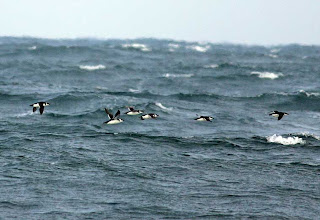 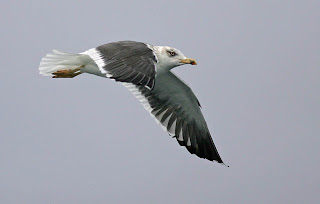 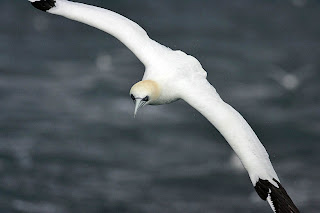 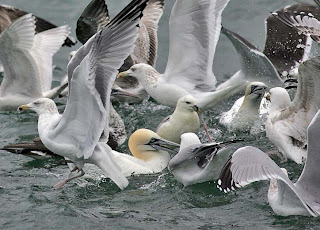 Some of the fish heads were very large... 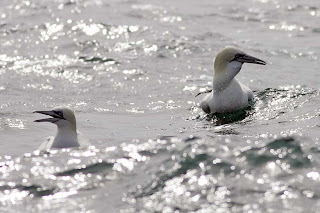