Our final trips of the summer began with a downpour Saturday morning before boarding, and ended with rain from some squalls inshore Sunday afternoon, but we had perfect conditions in between!  Light westerly winds on Saturday blew the scent of our chum offshore, bringing us more storm-petrels than we expected, and even slighter winds from the east on Sunday produced less than expected.  Birds were hungry on Saturday, thanks in part to the swift Gulf Stream current and recent new moon, but we were still surprised to have activity around us all day without the usual midday lull.  Sunday was more subdued, but we did find a small feeding flock of shearwaters over Skipjack Tuna that was exciting to observe.  In addition to many of our repeat customers, we had several people who had not been out with us before and a few people who had never been on a pelagic trip, so while there were no big surprises, we encountered a nice variety of species pleasing to all aboard.
No rare gadfly petrels this weekend, but Black-capped Petrels (rare in their own right) gave spectacular shows, and they were hungry!  There was action in the slick both days with up to 15 Black-cappeds feeding on chum Saturday while we drifted, and on Sunday one even pursued a Wilson's Storm-Petrel to steal a morsel of food.  Black-cappeds were in the shallows Sunday with a couple individuals inside the shelf edge in the morning and one seen on our way in that afternoon, in less than 200' of water!  At least three juvenile birds were seen on Sunday, always a exciting to see the almost silvery looking fresh plumage of a young individual!
Cory's, Great, & Audubon's Shearwaters were seen well on each trip and even though typical summer conditions have not really been in evidence this year, we were lucky to encounter some feeding flocks of shearwaters.  Luck brought us good looks at some of the nominate type of Cory's Shearwater, Calonectris diomedea diomedea called Scopoli's Shearwater, in addition to the more common Atlantic type (Calonectris diomedea borealis).  Great Shearwaters, though only a few were seen, made close passes for those aboard, many of whom had not seen them before.  They also put on a show diving to feed on food pushed to the surface by the active school of Skipjack Tuna on Sunday!  Sargassum was in short supply offshore, so it was no surprise that the same was true of Audubon's Shearwaters so often associated with this floating brown algae.  At least we had a few each day that were close enough for everyone to see!
The end of August is typically when numbers of Wilson's tend to wane and Band-rumpeds become scarce, so it was interesting to have two days so different in terms of storm-petrels!  Saturday the Wilson's packed into the slick shortly after we slowed down in the morning and at times a glance behind the boat turned up 100 or more.  The first Band-rumped Storm-Petrel flew in before 0930 that morning and we even flushed a couple sitting with some Wilson's on the water just before noon.  In contrast, on Sunday we had only reached a tally of 50 Wilson's by noon, and were lucky to encounter a Band-rumped sitting on the water with a couple of Wilson's a little after 1300!  The bird flushed, but then settled again and allowed one of the closest approaches we've had to a Band-rumped on the water!
Red-necked Phalaropes were seen each day, but cooperation was lacking without good conditions to hold them.  Bridled & Sooty Terns were seen each day despite the paucity of sargassum, and we were happy with some nice passes!  Saturday we found a flock at the end of the day that had some Sooty Terns, including one juvenile, and a Bridled Tern, then Sunday on the way in we passed an adult Bridled Tern sitting on a board for the closest look of the weekend!
A crisply plumaged juvenile Long-tailed Jaeger came in to investigate our slick on Saturday afternoon, responding well to the chum it dropped to the slick repeatedly to grab food and then followed us for 20 minutes!  Several Pomarine Jaegers were seen over the weekend with more on Sunday, and at least three around the feeding flock of shearwaters!
Black Terns were seen offshore over the weekend with more on Sunday following the front, and we even found two exhausted individuals sitting on the water!  Cetaceans were limited to Sunday with Spotted Dolphins coming in to ride the bow in the morning (link to YouTube video at end of post), then some offshore Bottlenose Dolphins were seen charging against the current just before noon that later came in to ride the bow as well!
Thank you to everyone who came offshore with us over the weekend and a big thanks to Scott Winton (http://birdaholic.blogspot.com) and Lev Frid for helping us lead the trips on short notice!  They both did a great job to help everyone have successful days offshore (Brian & myself included...!). 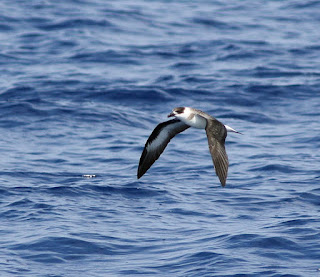 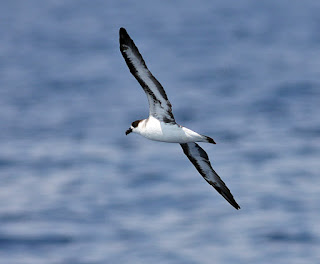 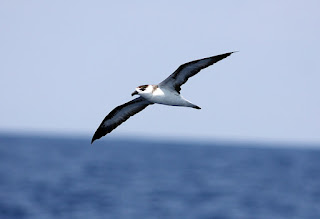 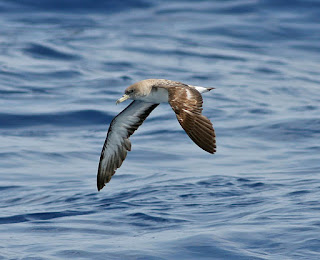 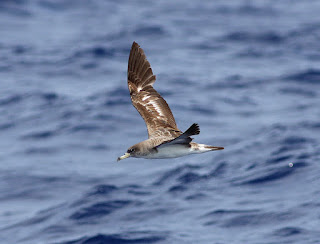 Band-rumped Storm-Petrel on the water 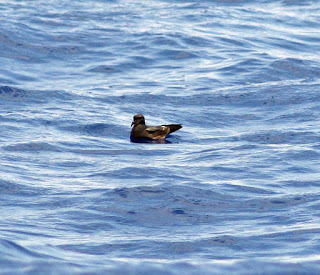 & just after taking off 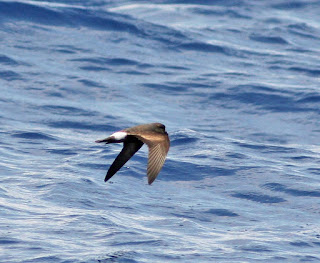 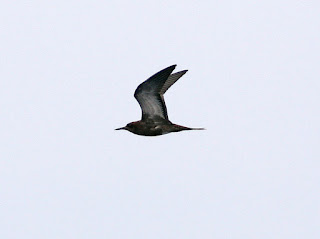 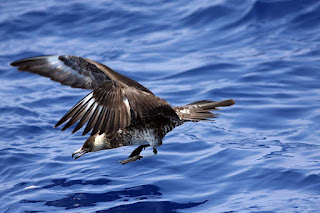 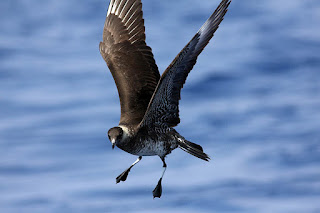 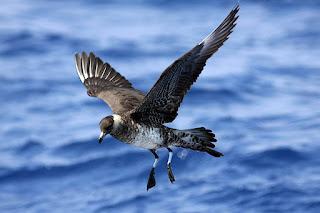 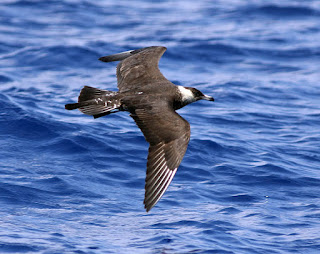 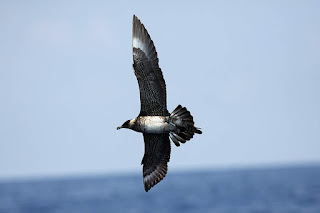 Yes, Long-tailed Jaegers do come in to chum...! 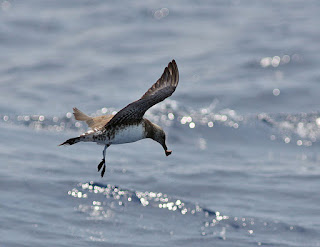 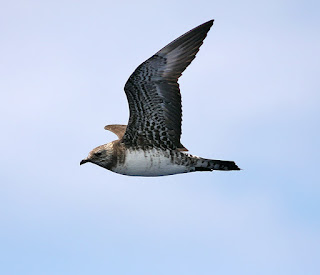 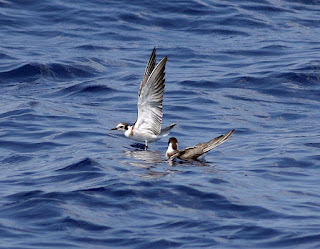 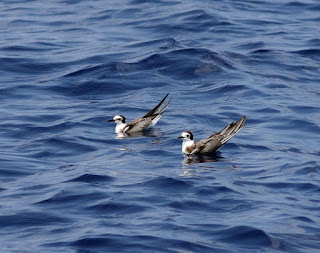 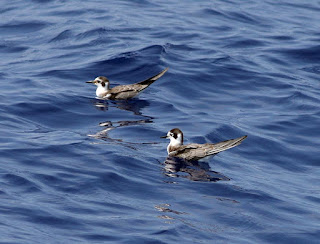 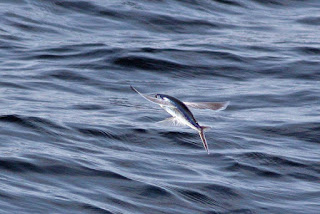