What we find on winter boat trips off Cape Hatteras can vary greatly from one week to the next depending on the near shore water temperatures.  The warm Gulf Stream current, which brings us such rare and exotic birds during the spring and summer, can really put a damper on the winter birding when it washes some blue water up to Diamond Shoals.  This happened to us week after week last winter, and as a result, we saw few alcids on most of our trips, this just a year after seeing hundreds of Dovekies per trip for weeks.  It was not so bad for the skuas though, as we saw them on each trip, which was our best ever season average.  Prior to Sunday's trip, I must admit I did not have high hopes.  We had been skunked on skuas on both trips the weekend before, and I felt like the cold water would be limited to a thin strip on the north side of Diamond Shoals - good enough for Razorbills, but probably not much else.  Gannets had been scarce and I thought this was not a good sign for Great Skua.  Heavy cloud cover meant there had not been a satellite photo of the area water (showing the temps) for a couple of days, so there was not much to do but hope for the best.  We had settled on running the trip from Hatteras, so I hoped we would not have to run way north to find cold water.

It was slightly foggy when we left the dock around 6:26 AM, but it soon cleared up.  The pipe dredge working on clearing the channel hadn't made much progress, so we had to make about a seven mile detour through Pamlico Sound to get to the ocean.  When we got to Hatteras Inlet, we found Razorbills inside the inlet.  When we made it to the ocean, the water was in the high 40s, so things were looking up.  Not knowing how extensive this band of cold water was, I headed east to Diamond Shoals and crossed to the north.  Numbers of Razorbills increased as we went.  We had seen a hundred or so by the time we got across the shoals, as well as a couple of Manx Shearwaters.  The first hour north of the shoals, we saw over 400 more Razorbills and we were just getting into it.  Between 10:00 and 11:00 I counted 765 Razorbills and that was probably low.  We also saw 15 Manx Shearwaters that hour and we were just three or four miles off the beach.  Heading eastward, the Razorbills continued in great numbers until we got into slightly warmer water.  The water had been about 46 degrees, but when it approached 50, we started to see small flocks of Dovekies buzzing around.  We saw about a hundred in thirty minutes, as well as the first few puffins of the day.  The water was a little choppy, so we could only see the close puffins, which for the most part were not flying.  We kept heading offshore, looking for warmer water and hopefully some Red Phalaropes, and maybe a fulmar.  We found the phalaropes and had good looks at dozens on the water.  We turned around in about 50 fathoms, where the water was in the mid 60s.  There was not a hard change there;  it just got rougher.  A few minutes later a Black-capped Petrel came zipping up the wake and gave us a good, long look.  As we worked into cooler water, we saw more Dovekies, including a few on the water.  One of these diminutive birds was snatched up by a Herring Gull, which soon dropped it.  When it returned to the surface, it was plucked from the water by a Great Black-backed Gull.  Then there was a big melee behind the boat, as more Black-backs fought to get the Dovekie, but in turn lost to a gannet, which choked it down.  Sad to see, bur for some reason, I was glad it was a gannet that prevailed over the gulls.  Just before 2:30 I glanced out the port side window and something caught my eye.  It was the old brown bomber from across the sea.  People had also just seen it from the stern.  We were in about 20 fathoms, south of Diamond Tower, which I suppose are prime waters for a traveling Great Skua.  The bird rushed the gull flock, but soon disappeared.  Many saw it, but a few did not, despite a quick turnaround and some instructions.  It was just not a close encounter, and this is typical of the Bonxie when we see it here.  An hour later, we were about ten miles from the inlet and only seven miles off the beach.  Kate was on the stern and started screaming.  I figured I knew what was going on and I was right.  There was another skua back there raising hell with the gulls.  This one  also kept some distance, but stayed around a bit longer.  From there it was a nice ride back in, with more Razorbills, including a flock of 18 maybe a mile up the sound!

Thanks to everyone who came and to Kate Sutherland and Scott Winton for leading the trip with me.

We also saw plenty of gulls and gannets, including many Lesser Black-backed Gulls and hundreds of Bonaparte's Gulls. There was a Laughing Gull just inside the inlet.  They begin arriving about now.  There were many Red-throated Loons miles off the beach, but just a few Common Loons.  We saw several Loggerhead Turtles, a couple of Hammerhead Sharks, and many Bottlenose Dolphins.  The weather was nice with slight seas and light to moderate northerly winds, but not much sunshine. 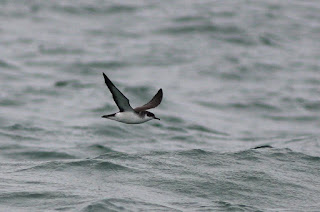 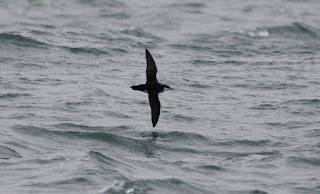 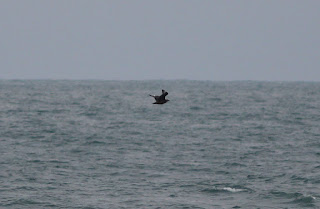 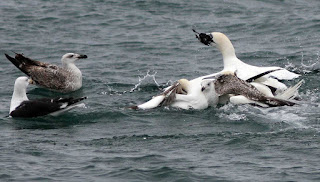 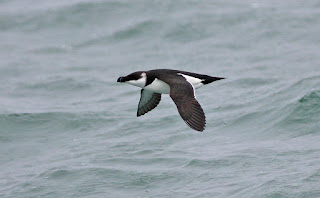 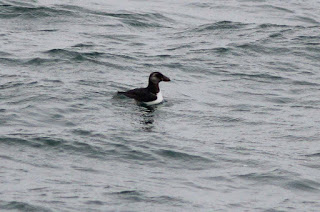 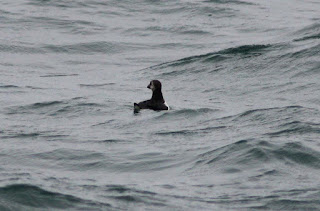 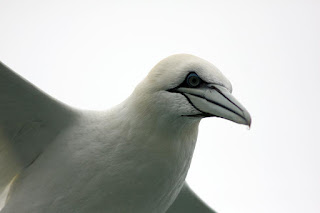 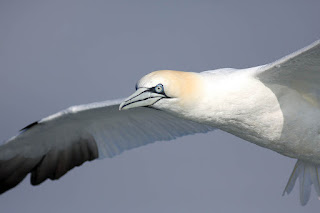 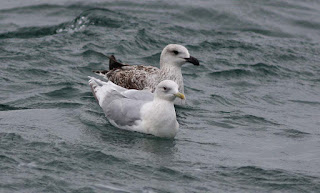 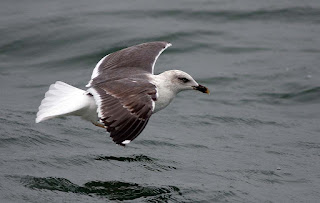 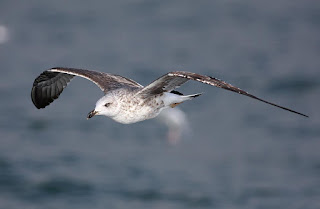 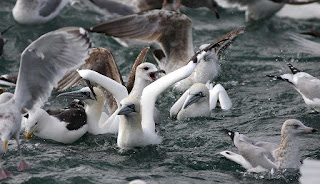 Posted by Kate Sutherland at 8:21 PM