The first three day weekend of the summer went off without a hitch!  We had excellent birding conditions all three days, though the conditions for humans may not have been so perfect if you ask some participants!  Winds were from the southwest all three days, but each day could not have been more different.  Friday was calm and sunny with the winds beginning to pick up a bit in the afternoon, Saturday held the most in terms of wind, and Sunday was still a bit windy, but with heavy rain and thunderstorms to contend with in the morning!  The Gulf Stream was fairly close each day and moving at a good clip, but there was not much Sargassum out there and the most notable this weekend was the absence of shearwaters!  Typically we expect to have no problem seeing large numbers of Cory's and Great Shearwaters in the summer, these were not typical summer trips.

The Fea's Petrel on Saturday morning was the bird of the weekend - this was the first Fea's to be seen in July since 2007; they are more typically seen in the spring or fall.  This bird shot by on the starboard side of the boat and flew down the slick, working around in the distance and then returning for a few close passes so that even naked eye, it was a great look!  Everyone also had great looks at Black-capped Petrels, and our other warm water specialty - the Band-rumped Storm-Petrel - both were hungry and easily recruited to the slick each day.  Wilson's Storm-Petrels were scarce, so there were times when the "default" storm-petrel in the slick was Band-rumped!  It was an interesting exercise to show participants Band-rumped Storm-Petrels without being able to use a Wilson's for comparison!  Amazing how easy it has been to find the Band-rumped Storm-Petrels so far this summer; these trips have far surpassed most others in quality encounters with this sometimes shy species.  Leach's Storm-Petrels were seen on all three trips, but they did not feed as readily in the slick for easy viewing.

Cory's Shearwaters were mostly seen on Friday and though there was a report of one on the way out Saturday morning, we did not see one for the list.  How it is possible to be out from Hatteras in the summer and see a Fea's Petrel, but no Cory's Shearwater, we do not know, but it has now happened at least once!  Great Shearwaters were seen flying by in the distance Friday & Saturday with one on Sunday coming in to the slick and plopping down right next to the boat for the weekend's best looks (and photo ops)!  Audubon's Shearwaters were as scattered as the Sargassum they favor and we had a tough time getting a good, close look at one, but again, on Sunday we finally had some closer views.

Two Bridled Terns were seen, one younger individual that was spotted by Chloe Walker (age 13 of TN) in the slick on Friday and another, more cooperative adult seen on Sunday afternoon.  A Pomarine Jaeger flew by the boat quickly on Friday afternoon and possibly another was seen Sunday afternoon on the way back inshore.

Non-avian highlights were also encountered, though not nearly like our last trips a couple of weeks ago!  We had a very close and cooperative Sperm Whale on Friday that swam right next to the boat for almost 30 minutes!  Later that afternoon we had a large Loggerhead turtle with an attendant school of fish swim right under the boat, surfacing for an excellent photo-op.  That same day we also saw a nice school of Tripletail under a log out in the clear, blue water of the Gulf Stream.

Overall the trips were a great success!  We would like to thank everyone who joined us over the three days.  A big thanks also to our leaders, George Armistead and Kyle Kittelberger (who got us on that Fea's Petrel!) - both were a great help spotting birds and helping our participants.  We have three long weekends in August - two from Hatteras and one from Oregon Inlet - please check our website for prices and availability!

*Many of the Band-rumpeds were following in the slick for fairly long periods, these are our best estimates!
A few photos from Friday's trip - more to follow later this week!
Band-rumped Storm-Petrel (Kate Sutherland) 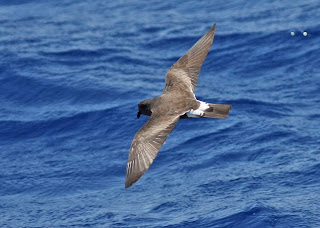 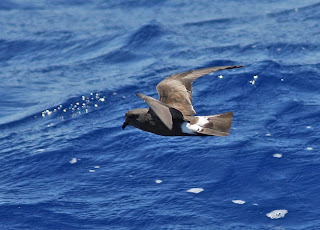 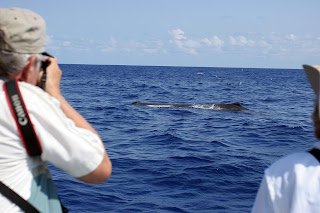 you can see how close it was!  (taken from the wheelhouse by Brian Patteson) 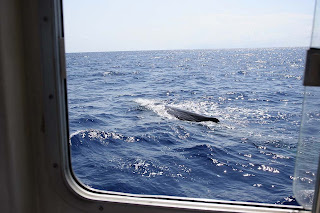 The Swift Ace behind the Sperm Whale (Brian Patteson) 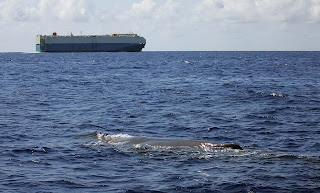 Posted by Kate Sutherland at 5:55 PM