Last Monday & Tuesday's trips found at least five individual Trindade Petrels, then on Wednesday a front pushed through bringing cooler temperatures and some northerly winds, uncommon here in mid August.  We did not know if the birds would be lined up out there, or pushed offshore, but we did know that the stage was set for something different than just typical summer trips August 16-19.  Brian put the word out, and while we still had only a few participants for Friday and Sunday, Saturday's trip filled with a decent number of participants, most from the Carolinas.  Each day held different weather conditions thus making each trip quite different - the beautiful blue water of the Gulf Stream was over 40 miles offshore by Sunday - definitely not a typical August day offshore from Hatteras!

Friday's trip was the roughest, with winds from the north northeast at about 15 knots most of the day.  The waters in the Gulf Stream were choppy with this wind that is counter to the current generally moving swiftly to the northeast.  Shearwaters were seen on the way out in the morning, an uncommon sight so far this season.  When we have wind against the current like this, it typically makes it a good day for storm-petrels and that it was!  We had the most Wilson's and Band-rumped Storm-Petrels of the weekend on Friday's trip, a pleasant surprise after encountering low numbers just a few days previous.  Black-capped Petrels also were out there in good numbers, keeping in line with what we had seen on our last trips.  The birds were hungry, perhaps due to the weather that had just passed through, or the lunar cycle, so we had a nice show in the slick all day on Friday.  The highlight, besides the storm-petrels, was a group of six Bridled Terns that we picked up from a feeding flock of shearwaters around 1230 - these birds stayed with us for almost two hours feeding in the slick!

Saturday winds were still from the north early in the morning and forecast to be light all day with some variation in direction, but mostly with some east to it.  As we headed offshore, the shearwaters were streaming by, many more than we had on Friday.  We slowed down just after 0800, shallower than usual since there were so many birds around.  Black-capped Petrels began to appear with the Cory's and Audubon's Shearwaters plus a few Wilson's Storm-Petrels were beginning to gather in the slick, when a jaeger was spotted flying towards the boat - a first summer Long-tailed Jaeger flew towards us and then continued by, leaving us content with the view even though the bird did not linger!  We found a feeding flock of birds that we spent almost two hours following around here, in the shallow waters, turning up three species of shearwater plus Black-cappeds, Wilson's and Band-rumped Storm-Petrels, a couple of Sooty Terns and some Bridled Terns - including the first juvenile terns of each species for the season!  Around 1030 we headed offshore again with squalls all around us on the horizon.  Just before 1100 someone glanced up and spotted a White-tailed Tropicbird!  The bird did not linger, but flew in towards the boat to check us out and then headed away, it was close enough for everyone aboard to get a great look at this dainty powerhouse!  We were finally getting out into the deep and when a feeding flock was spotted just after noon, hopes were high that we might have a chance to find something different as we sped in that direction.  Brian slowed as we approached the flock and then shouted as he spotted a Trindade Petrel flying some distance from us with the shearwaters!  In time, the bird approached the boat and flew around us before melting back into the flock.  20 minutes later the same individual flew back towards us for a few more close passes!  It was a nice looking intermediate individual, making it easier to identify the bird we saw less than an hour later as a second dark individual.  There was also one Manx Shearwater seen in this offshore flock in addition to some Red-necked Phalaropes.  Just before we picked up to head in for the day, a Pomarine Jaeger flew by, upping the species count for the day to fourteen!

Sunday the winds were coming back around to the southwest, typical summer weather for us, but it blew southeast all night on Saturday, so the seas were a bit mixed up for the morning's trip offshore.  In contrast to Friday and Saturday, hardly any shearwaters were seen on the run out in the morning and the water was very green looking in comparison.  We slowed down after 0830, offshore of where we had been starting the previous days, and there were loads of Cory's Shearwaters around us just flying by.  A couple of Black-capped Petrels flew by distantly and some Audubon's Shearwaters were around as the first photo-op of the morning presented itself - a Bridled Tern perched on a coconut!  Brian decided to continue offshore in hopes of finding the clear blue fast moving waters of the Gulf Stream.  We finally got into some current about 1000, and by 1130 we were in some nicer blue water just under 9,000 feet in depth and over 42 miles from the inlet.  Most of the birds we saw on Sunday were between 30 and 40 miles offshore, much farther than they had been!  There was a fly-by Sooty Shearwater first thing in the morning and then we had excellent looks at the other four species we saw on Sunday - Cory's, Great, Manx, and Audubon's.  Instead of feeding flocks, today it was flocks on the water, and in one there were at least two Manx Shearwaters, one of which sat with some Audubon's for an excellent comparison!  While Wilson's and Band-rumped Storm-Petrel numbers were low, we still had great looks at each, and Sunday proved to be the best yet for the diminutive Red-necked Phalaropes!

Overall we had a very successful three days offshore!  Not many cetaceans were seen over this long weekend, but we did have a small group of Spotted Dolphins on Friday and two Bottlenose Dolphins, one a tiny calf, on Sunday.  I want to thank everyone who came offshore with us this weekend, we could not have done it without you!  Also a big thanks to Scott Winton and Nate Swick for helping us out as leaders on Saturday and Sunday's trips.  These were our last trips of the summer from Hatteras and our next three will be going out from Oregon Inlet to the north with Wanchese as the port of departure.  It will be interesting to see what we find up there and how it compares to our summer birding off Hatteras.

Trip Lists are now posted on the website - on the right side just look for a post with the dates & trip lists.

Photos are all by me this week -Kate Sutherland 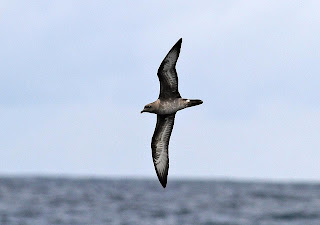 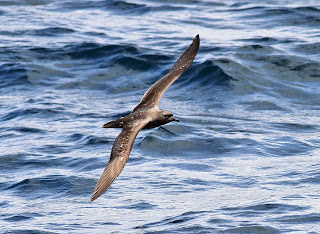 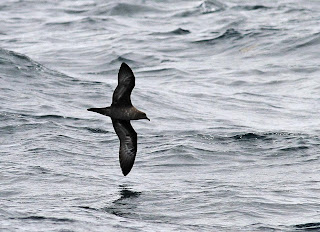 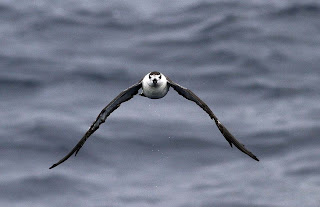 same individual as above 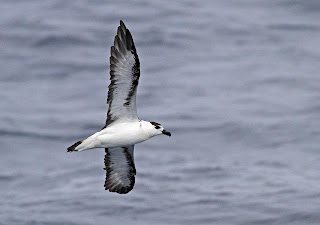 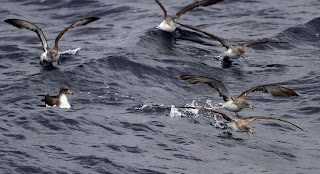 one of the Manx Shearwaters seen on Sunday's trip 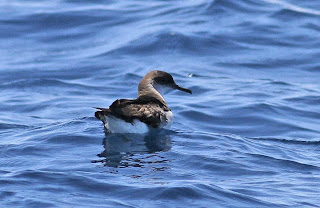 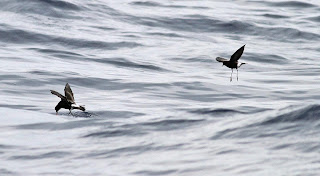 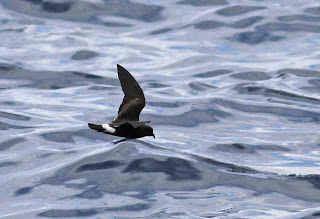 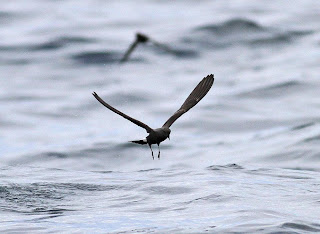 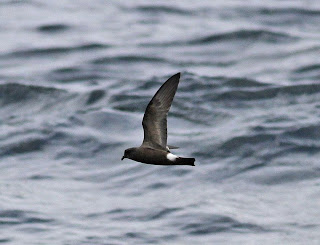 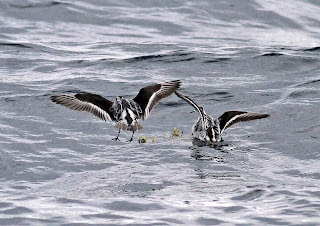 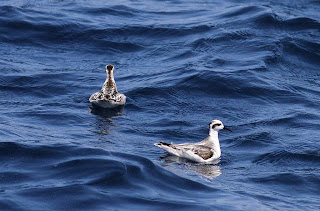 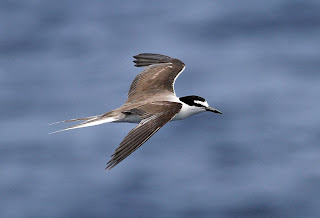 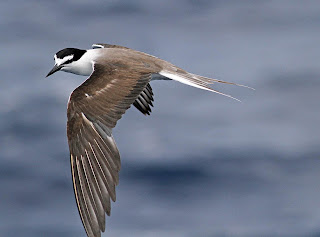 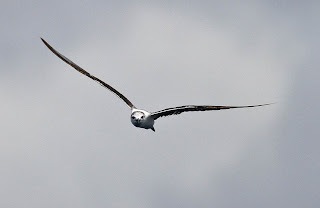 my guess for these guys - Atlantic Flyingfish (Cypselurus melanurus) - but for now, just the genus will do!  Cypselurus sp.  They were around a grassline with some feeding shearwaters on Sunday's trip;  we were in about 3,000 feet of water or more. 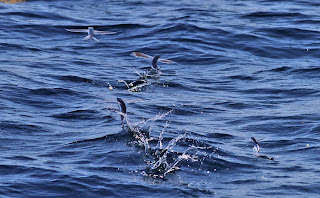 Posted by Kate Sutherland at 7:15 PM