We hatched the plan back in October.  Kate and I were out in California to do some pelagic trips from Bodega Bay.  On the first day we were out with Debi Shearwater on the New Sea Angler, and we saw many familiar faces.  Among them were Neil Hayward and Jay Lehman.  They were both doing ABA Big Years and were trying to score a new year bird that day.  Over the course of the day, it came up that they needed a Great Skua for their year lists and wondered if it might be possible to see one in December.  I told them "maybe" and that later was better.  I thought our best bet would be to try the last week of December off Hatteras.  This had worked for John Vanderpoel in 2011 when he needed a Great Skua, so why not give it a shot?  Only difference was that we would have to scale things down and use a smaller boat because the Stormy Petrel II would be in Virginia all of December.  Fortunately for us, we had a smaller boat ready to go: the aptly named F/V Skua.

It had been our plan for a while to run some birding trips on this smaller boat.  In fact that is what we had mostly come to Bodega Bay for: birding on a smaller boat with less people.  We had already been out a couple of times with Capt. Vince Orsini on his charter boat Miss Anita and it had been great for seeing and photographing birds at close range, as well as little albacore fishing.  It had taken a while to get our own "little boat" ready for birding.  She was a hard used commercial boat when I bought her in 2009.  I extended the cabin and installed a toilet a couple of years ago, but the engine was tired and needed replacement.  Numerous commitments with the big boat also kept us pretty busy, so we did not get done re-powering the little boat until this year.  With fresh power, I felt good about taking people to sea on this small but capable vessel.  Built in Maine, the 31' BHM was advertised as "the biggest little boat on the bay" and it has earned a reputation as one of the most sea-going boats around.  Downeast boats are sea kindly by nature and the BHM is no exception.

Back to birding: it's mid December and Neil Hayward, who did not really begin in earnest on his Big Year until spring, is one bird away from setting a new ABA record.  Jay also has a very respectable list and both still want to try for a skua.  So the date is set and we also book the first three callers who want to go along for the ride.  We are happy that Neil has enough faith in us to gamble on the Great Skua, which is regular here but by no means guaranteed.

Amazingly enough, the weather forecast is near perfect for the first day we picked for this trip, so we head out to sea on December 28.  The water is a little choppy at first, but not really rough.  We head east toward Diamond Shoals, not seeing too many birds along the way.  Approaching the shoals, I slow down and Kate starts chumming.  Some gulls and gannets begin to feed in our wake and up on the shoals a young kittiwake joins the flock.  There are some more gannets out in the distance.  Our flock grows and another kittiwake comes in.  Then we go through a patch with fewer birds.  I speed up and head toward the "Tower" out past the Outer Diamond.  Almost immediately a Manx Shearwater comes sailing in and I slow down for better looks.  The Manx puts on a nice show and I jog out toward the tower.  The water starts to warm up and there is 70 degree water inshore of the tower.  I slow down and a Northern Fulmar finds us.  We enjoy good looks at the fulmar and head northeastward along the ragged change for a couple of miles.  There is a hammerhead shark and some Loggerhead Turtles, two of them close enough for phone photos.  Inshore of the change a trio of Red Phalaropes buzzes by.  There are some Bonaparte's Gulls and scattered gulls and gannets.  Our flock is growing, but the weather is getting prettier and they are getting lazy and strung out way behind.  I tell everyone that this is where we have seen many skuas and we'll work north for a few miles, then back south.

10:52.  I hear some shouting in the stern.  "What have you got?"  "A skua!"  "Coming into the flock."  There he is!  I can see the skua without binoculars.  It's about as close as most of them we see, and I expect it to disappear at any moment.  But to our relief, this one decides to stick around and beat up some gulls.  I run the boat around a little to keep up with it, but it keeps coming back and lands on the water periodically.  Great looks are had and there is no doubt that we have seen a Great Skua.  On its final pass, the bird flew right over the boat!  Many photos are taken and thanks and congratulations given.  We have done it, and the rest of the world knows about it within minutes.

After that it was a nice, slow ride back south to Hatteras.  We took the inshore route hoping for the longest of long shots, an albatross, but had to settle for some Razorbills and a very hungry Sooty Shearwater.  We see no more skuas, so I feel that much luckier in the end.  The F/V Skua had earned her keep and now has a hard act to follow for next year, when we begin offering some special trips and charters for birding with her.  Thanks to everyone aboard: Kate Sutherland for all the hard work, Neil and Jay for keeping the faith, and Lynne Miller, Bruce Richardson, and Nate Swick (you can see his blog post about the trip here) for all being part of it.

Some photos of the Great Skua courtesy of our participants!  Thanks everyone! 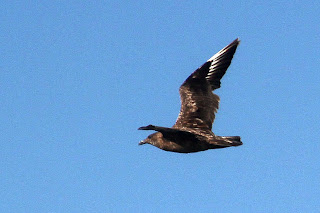 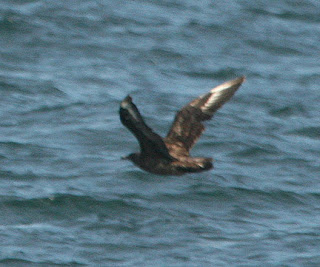 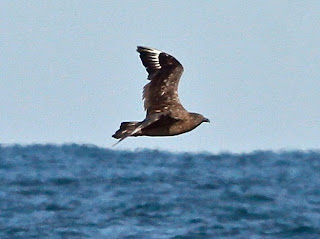 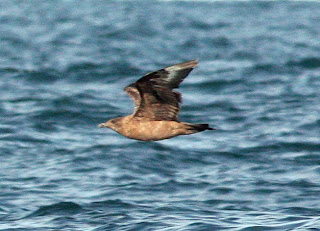 & Bruce also got a shot of it sitting on the water! 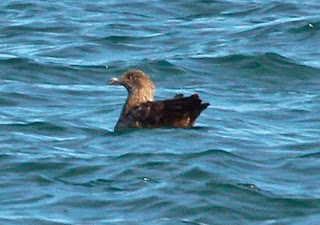 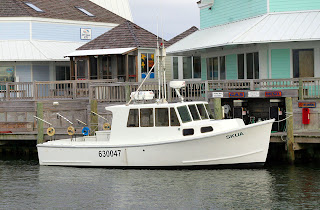 & a group photo at the end of the day!  Nate Swick, Lynne Miller, Bruce Richardson, Jay Lehman, Brian Patteson, and Neil Hayward - since Kate took the photo, she is not pictured! 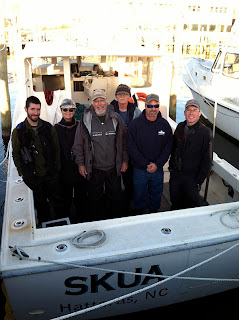 A few more images from the day by Kate Sutherland
Our very hungry Sooty Shearwater was not intimidated by the gulls in our flock!  This individual stayed with us for a while, circling the boat and diving with the gulls behind us again and again (to our delight!). 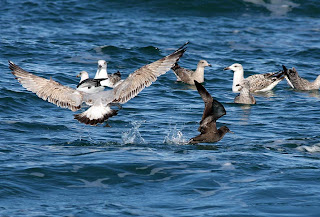 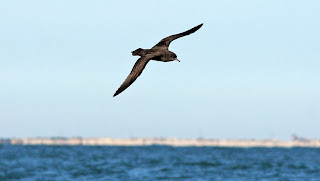 We saw more Lesser Black-backed Gulls on this trip than I can remember seeing in the past, perhaps because we were out in December vs later in the winter?  Who knows!  At one point there were over 100 following the boat as we passed offshore of Cape Point.  Here are two young individuals: 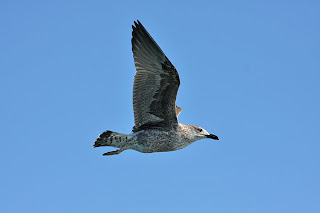 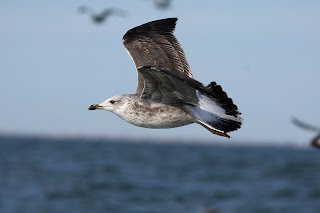 We had excellent looks at Bonaparte's Gulls over the course of the day. 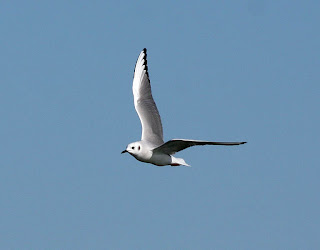 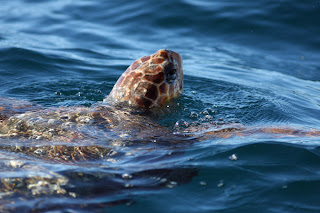 Posted by Kate Sutherland at 8:58 AM