Every Day is Different in the Gulf Stream

Our back to back Gulf Stream trips this week consisted of a charter carrying a group from Duke Marine Lab in Beaufort taking a summer course focusing on marine mammals and seabirds, then a regularly scheduled Seabirding pelagic trip the following day.  It had been almost a month since we had a chance to run a seabirding trip down here as the weather has been uncooperative so far in July!  So even though Brian and I both know how different every day can be out there, it was still interesting to see how different these two days were in terms of the Gulf Steam conditions and the life we encountered, regardless of the fact that we covered some different ground over the course of the two days!  (July 20 sunrise by Kate Sutherland) 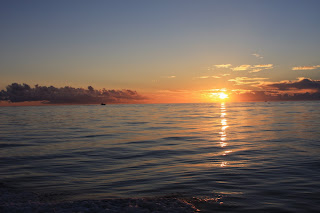 Thursday we headed more to the south than we typically would on a birding trip because there were some reports of Pilot Whales in the area down there a few days previously and this was a species the group was keen to encounter!  The shelf break is much more distant in this direction, so we covered a lot of shallow water on our way there and did find some cooperative Atlantic Spotted Dolphins (photo by Brian Patteson)! 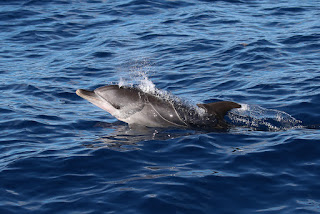 The winds were light from the west north west in the morning making the air temperature quite comfortable and we also had some nice cloud cover, both positive notes on a summer day in the warm waters of the Gulf Stream!  Once we were past the shelf break, about 38 miles from the inlet, we started to see some birds!  We did not chum on this trip, but still ended up with an impressive list for the day - and right off the bat two Bridled Terns came in to check us out, while at the same time Brian was focused on an interesting storm-petrel flying by in the distance.  We wish we had been able to get a better look at - it looked to be a large, all dark storm-petrel...Swinhoe's??  We will never know for certain!!  As the morning continued we had excellent views of all of the seabirds we would expect to see out there and even found some Sooty Terns and shearwaters feeding over a nice school of Skipjack Tuna!  The Gulf Stream current was not too swift on Thursday, moving at about 2 knots, making it possible for us to spend some time with a playful pod of offshore Bottlenose Dolphins (photo by Brian Patteson) without worrying we would get swept too far north! 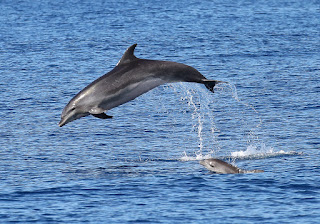 While there was not much Sargassum out there, we were able to scoop some of both species aboard for examination plus some shrimp, crabs, and filefish!  Overall a great day in the Gulf Stream, even if we did not turn up any Pilot Whales, and we even passed a cooperative, young Bridled Tern resting on a board on our way back inshore (photo by Brian Patteson)! 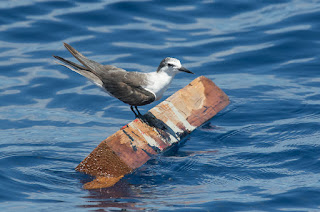 After seeing the shearwaters and terns on Thursday without any chum, Brian and I hoped that the conditions would be similar for the birding trip on Friday...but of course they were not!  We still had an awesome day out there and found our usual suspects, less the tropical tern show.  The winds had increased from the south west and the water had totally changed from what we had on Thursday with some greener water extending out past the shelf break and the beautiful, cobalt blue waters of the Gulf Stream about 30 miles from the inlet!  And the current was swift on Friday moving between 4 and 5 knots over the bottom!  It was nice once we got out to the blue water, the birds responded well to our chum and we had a nice group of Wilson's Storm-Petrels with close passes by Black-capped Petrels and Band-rumped Storm-Petrels.  Audubon's Shearwaters were quite approachable and we found a few on the water (photo of one taking off by Brian Patteson), 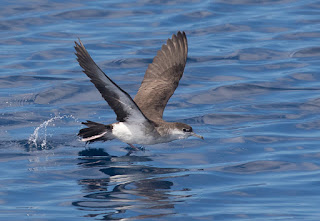 but Cory's and Great Shearwaters were a bit scarce, though the latter did come in close to chase our tropicbird teaser (a squid chain with no hook!) that we had out behind the boat (photo by Kate Sutherland)! 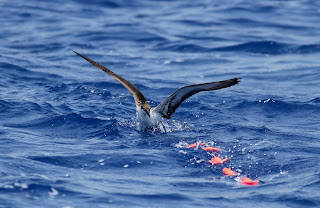 At one point when we turned back on our slick to check out a Band-rumped, a Sooty Tern flew right by the boat!  Excellent views were had of this powerful, yet elegant dark backed tern!  For many the highlight of the day came in the morning when Brian spotted a Pomarine Jaeger on the water that allowed us to approach closely before taking off in pursuit of a Cory's Shearwater (photo by Kate Sutherland)! 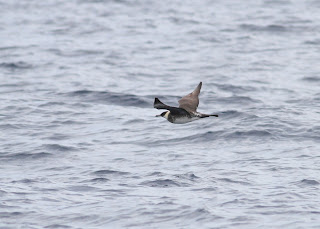 The highlight of my day?  Band-rumped Storm-Petrels.  For two or three hours we had between 5 and 9 individuals in the slick, sometimes the closest storm-petrels would all be Band-rumpeds!  Pretty amazing, and while this happens every summer, we don't always see the smaller Band-rumpeds on every trip.  Friday we had both types back there and it was a treat to spend time watching the huge looking "Grant's" flying around with the smaller "Madeiran" type of Band-rumped.  We were unable to turn up a single marine mammal on Friday...but then again...every day is different in the Gulf Stream!
Thanks to Andy Read and the Marine Lab for chartering us for the trip on Thursday and thanks to everyone who joined us for Friday's trip!  The species totals are below - remember that we did not chum on Thursday!! 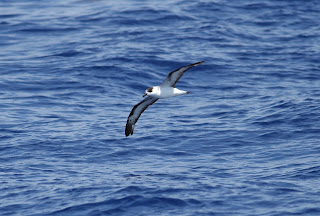 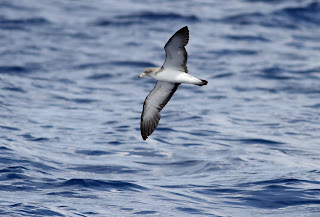 Another shot of the Great Shearwater chasing the "squid" chain! (Kate Sutherland) 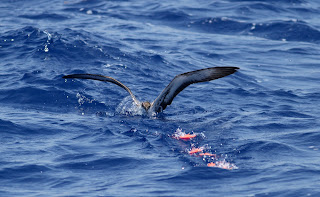 One of the Grant's type Band-rumped Storm-Petrels (Kate Sutherland) 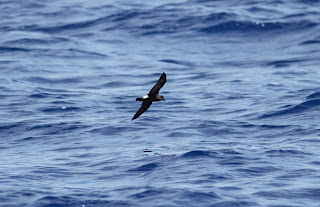 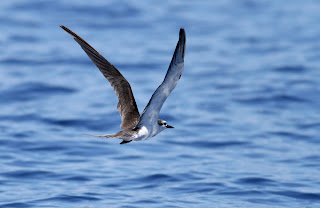 One more photo of an Atlantic Spotted Dolphin (Brian Patteson), the younger individuals do not show spotting like the adults. 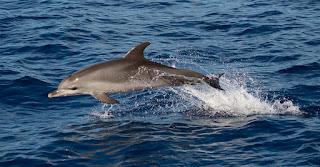 Posted by Kate Sutherland at 8:11 PM