The week had some nice, shifting winds leading up to our trip so we, and our participants, were eager to get out there this morning!  Crossing through Hatteras Inlet was quite smooth and the ride offshore was nice with just a little bit of chop from some southwesterly winds.  Unfortunately, we did not see many birds until we crossed a faint Sargassum line just inshore of the shelf break where we began to see some Audubon's Shearwaters and a few Cory's Shearwaters.  Once we made it over the edge of the Continental Shelf we slowed down and began chumming.  In contrast with last week's trip, the birds responded well to the chum and we had excellent views of everything we saw today.  By 0900 we had a nice feeding group that included a super cooperative Manx Shearwater feeding with an Audubon's!  It was amazing to watch how long the Manx would dive in comparison with the smaller, more delicate Audubon's, but what was really nice was the time we had to observe these two superficially similar species, both black and white shearwaters, and see how different they actually are!  The Manx (top photo by Brian Patteson) is a larger, beefy looking shearwater with a long bill, dark face, and short tail with white undertail coverts, while the Audubon's (bottom photo by Kate Sutherland) typically has a paler face and weighs half as much as the Manx showing a long tail and dark undertail coverts. 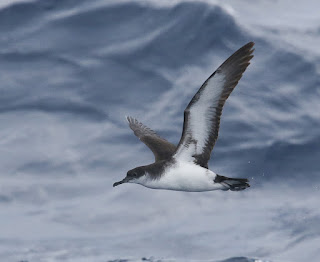 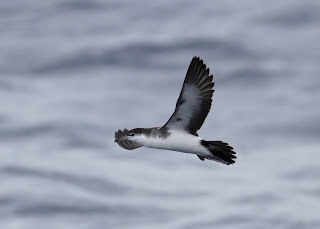 We had a good number of Wilson's Storm-Petrels come in well to the chum and they made many nice passes giving people a chance to study their swallow-like flight style and their feeding mannerisms, dropping their long legs down to the water, balancing and hovering as they fed.  This made it easier to recognize the different flight of the Band-rumped Storm-Petrels (photo by Kate Sutherland) 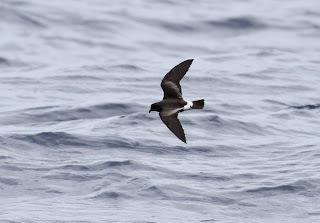 when they came soaring in to the slick on their long, bowed wings, flying circles around the Wilson's and dropping down to the water to feed since their legs are too short to hover like the Wilson's!  Our other Gulf Stream specialty did not disappoint and Black-capped Petrels also responded well to the chum with some nice passes by the boat and we even had a few sitting on the water!  These birds were mostly the dark faced type and were in varying stages of molt, but we did see a few white faced birds out there today too, plus one really fresh looking individual that could have been a juvenile from this year (photo by Kate Sutherland). 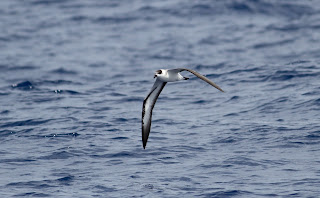 A really interesting note is that the majority of the Cory's Shearwaters we saw well today were the nominate type, or Scopoli's Shearwaters (photo by Kate Sutherland). 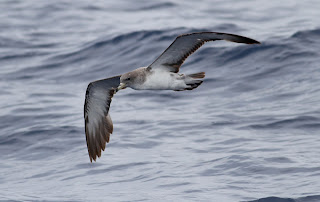 Only a few were Atlantic Cory's - it seems that sometimes we see the Atlantic Cory's more in the inshore waters and the Scopoli's in the Gulf Stream waters.  The Scopoli's also are more attentive to the chum and will readily feed behind the boat while the Atlantic Cory's will only occasionally show interest in the chum.  We luckily had at least one Great Shearwater come by for a nice view in the afternoon (photo of Great in flight, Cory's on the water by Kate Sutherland)! 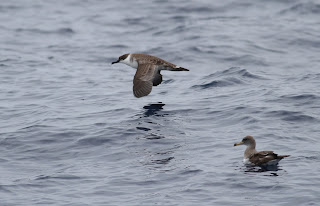 Then, about 15 minutes before we needed to pick up speed and head back inshore, Todd Day spotted some terns in the distance...Ed Corey then picked them up over some Bottlenose Dolphins and Brian was able to run over to them ending the day with a pair of Bridled Terns flying right by us and then picking around in the slick for a few minutes before we had to head home!  (photo of a first summer Bridled Tern by Kate Sutherland) 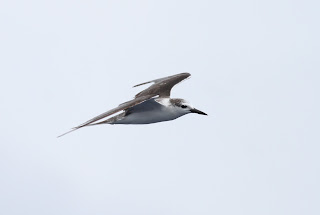 What an awesome day out there!  Thank you to everyone who joined us today and a big thanks to Ed Corey for helping Brian and I lead the trip!

All photos below are by me, Kate Sutherland.
A more typical view of a Black-capped Petrel 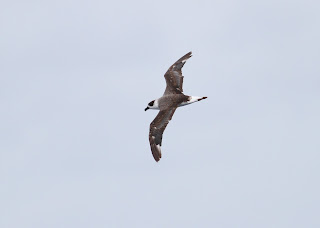 A few more photos of some nominate type Cory's, or Scopoli's, Shearwaters 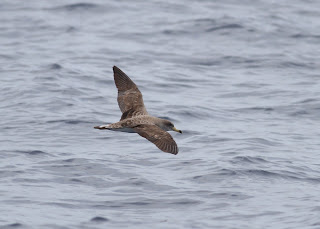 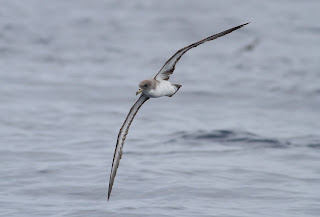 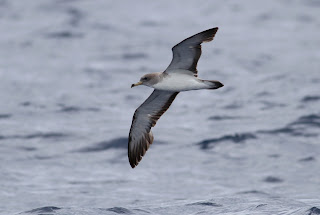 Head on shot of Manx Shearwater (above) and Audubon's (below) to give an idea of the difference in body size and shape. 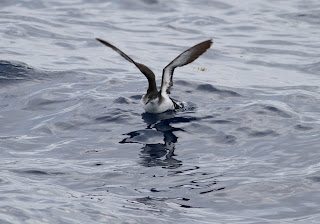 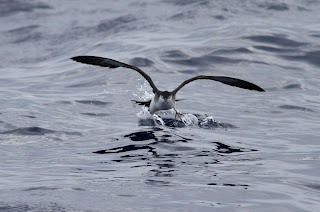 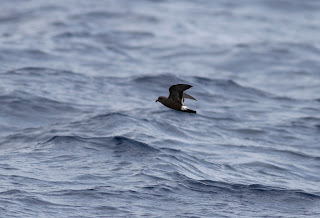 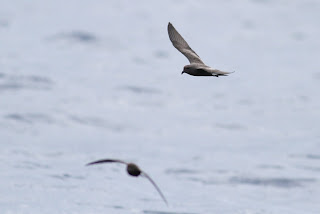 Posted by Kate Sutherland at 6:51 PM