We again had some rain and wind preceding our trip on Friday, but the winds subsided to 10-15 kts from the south southwest and we only encountered a bit of rain first thing in the morning!  One large shearwater, a Cory's or Great, was all we saw on our way to the shelf break.  Once we slowed, we had five species in the first thirty minutes, not bad!  Black-capped Petrels were the highlight again this weekend with birds feeding in the slick behind the boat and flying by at close range (photo Kate Sutherland). 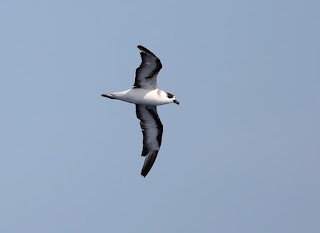 This was interesting since typically birds are not as hungry on the full moon, though we have had a lot of storms moving through of late, so cloud cover could have impacted their night time feeding.  Around 0900 we had a first summer Bridled Tern fly in to inspect the slick and then move on.  This was nice to see since these tropical terns have been in short supply so far this year, hopefully we will begin to see more of these and the Sooty Terns as we move into August.  Cory's and Scopoli's (photo by Brian Patteson) were both seen well during our time out over the shelf, 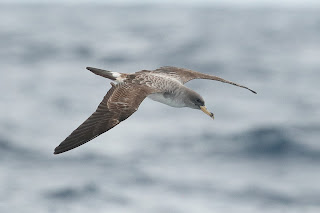 and we were lucky to encounter a few Audubon's Shearwaters on the water, plus some even came in to feed on the chum.  Band-rumped Storm-Petrels were not easy to find, but we did turn up a few in our flock of Wilson's (photo by Brian Patteson)! 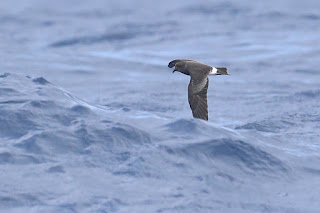 Hoping to find a tropicbird, we continued farther offshore than usual in search of some habitat...we found it, but we also found some swift current in the hot, blue Gulf Stream water.  This made our inshore tack a bit different than usual since we had to kick up our speed just to head toward the inlet against the strong northeasterly flow - the birds followed though and were more than happy to feed on the chum as we worked back to the north / northwest.  Lucky for us, an adult Sooty Tern flew in to check out our slick, giving us a nice look before moving on, and a Great Shearwater joined the back of our flock as well.  We circled back for a nice view of this shearwater that just last month we had feeding beside the boat!  That's how it goes though with these shearwaters, you never know where they'll be or if they will decide to join us in the slick.  The Black-cappeds, Scopoli's, Audubon's, Wilson's and Band-rumpeds all were very responsive this trip - so we saw all that we hope to see out there this time of year.  No tropicbird...but there is always next weekend!

Thanks to Jeff Lemons for helping Brian and I lead the trip this week, our trip on Saturday was cancelled due to weather.  First time we have had to weather out this year, but it happens and better to be on the safe side!

Black-capped Petrel, dark faced bird, dorsal view.  Most of the birds we saw well were dark faced individuals and were actively molting their primaries.  (Kate Sutherland) 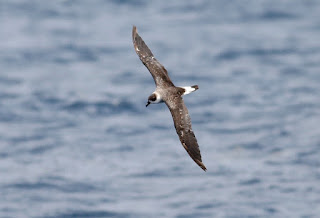 A Black-capped Petrel feeding on our chum!  (Kate Sutherland) 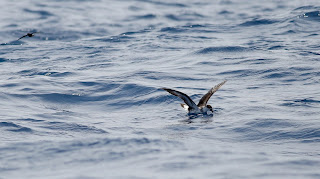 Another Scopoli's, different individual than pictured above, showing the underwing.  (Brian Patteson) 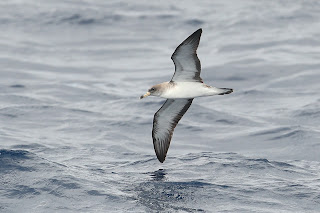 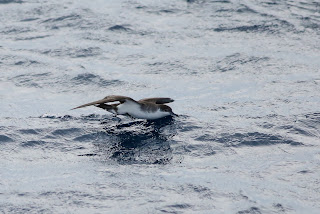 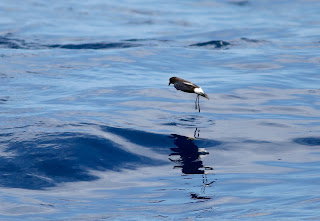 I did manage to capture a quick image of the first Bridled Tern we saw... (Kate Sutherland) 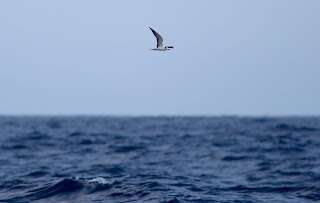 Posted by Kate Sutherland at 5:00 PM