Friday was a calm day tucked between two windy days...and while we would typically prefer some nice stiff winds, it turned out to be a nice day for both seabirds and humans!  I don't even think we had any spray on the boat all day, plus we had some incredible feeding flocks.  The ride out to the shelf break was quiet, but just inshore of the break we found our first shearwaters feeding, Cory's types with Audubon's.  As we were watching the shearwaters an Ocean Sunfish (Mola mola) leaped out of the water right next to us!  Just over the break we had another encounter with our charismatic megafauna, this time with a Leatherback!  It surfaced a few times giving us all an incredible look at the back of the head and the pink spot that is thought to allow sunlight into the pineal gland, adjusting their circadian rhythms and triggering movements to different feeding grounds based on changes in daylight.  (photo by Kate Sutherland) 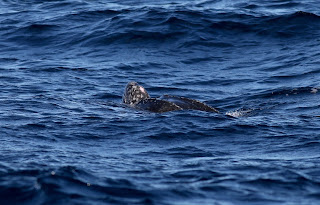 We also found some shearwater flocks just over the shelf break and had our first Black-capped Petrels fly by the boat less than 30 minutes later!
The Gulf Stream current and the really hot water was too far offshore for us to reach, but the water did warm up as we headed in that direction!  There were birds around all day and we had a few Wilson's Storm-Petrels that came in to check out the slick; it was nice to see them since they have been a bit scarce this fall!  We finally had some jaegers out there, the first to approach the boat was a juvenile Long-tailed Jaeger; it came in and flew right over us before heading off! (photo by Ed Corey) 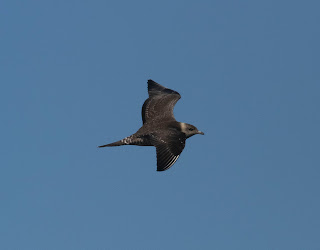 Shortly after that we had a dark Pomarine Jaeger join us in the slick, it was very cooperative for photos and stuck with us for at least 30 minutes.  As we closed in on 1,000 fathoms (about 6,000 feet) someone shouted "WHALE"!!  A Sperm Whale was surfacing just off the starboard side!  We were able to turn a little to get it in some better light and we watched it surface a number of times, its bushy blow angling to the left, until it dove, giving us an incredible view of the tail stock and flukes of this toothed whale! (photo by Kate Sutherland) 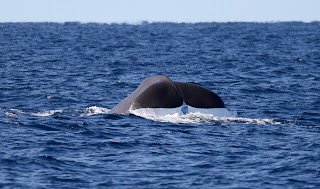 This was the first sighting for us in 2018, lucky on our last trip of the year!
Our inshore tack was no less productive than our trip offshore and we added a species to the October trip lists for the year with a Bridled Tern!  While it did not come very close, the identification was clear as it flew across the bow.  As we approached the shelf break there were many flocks of shearwaters on the horizon so we were able to move from flock to flock checking for anything different!  We had excellent views of Atlantic Cory's with a few Scopoli's, Great Shearwaters, and Audubon's all feeding on some skipjack tuna and their prey that were busting on the surface! (photo by Kyle Kittelberger) 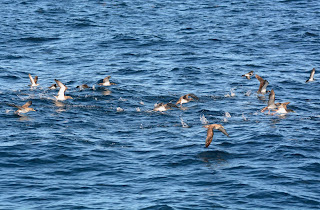 While we were with the shearwater flocks we had another three Pomarine Jaegers fly by, one was even pursued by a Black-capped Petrel!  It was such a treat to get offshore this fall, hopefully these trips will help to entice others to join us next fall!
Thanks to everyone who joined us out there and thank you to Kyle Kittelberger and Ed Corey for helping Brian and I lead the trip and for contributing photos for the blog post!  A big thank you too to Brad Sale for sharing some of his Sperm Whale photos with us (see below)!

Black-capped Petrels did not disappoint!  (photos by Ed Corey top, Kate Sutherland below) 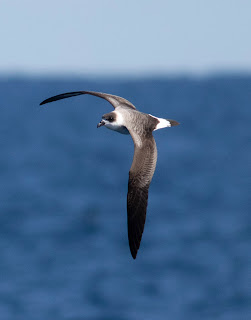 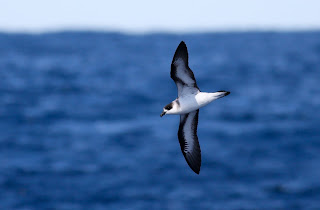 The number of Cory's we saw was impressive!  We had both Scopoli's (top) and Atlantic Cory's (below) (photos by Kate Sutherland) 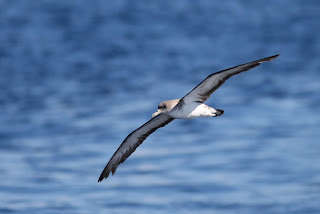 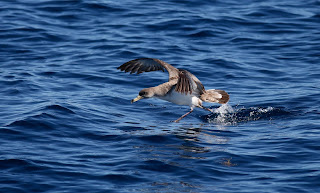 Audubon's Shearwaters also put in a nice showing!  They were very cooperative in the feeding flocks (photo by Kyle Kittelberger) 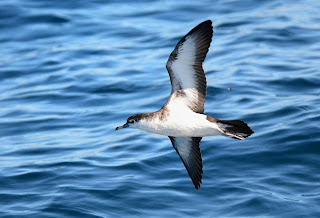 A few more jaeger images - the juvenile Long-tailed (above) and the dark Pomarine Jaeger that followed us for a bit (below).  (both photos by Kyle Kittelberger) 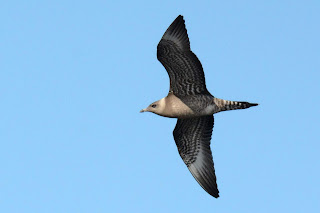 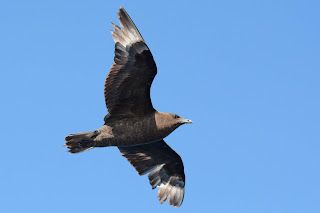 One of the Black-capped Petrels chased a Pomarine Jaeger we had later around one of the feeding flocks!  Not the sharpest image, but always interesting to see!  (Kate Sutherland) 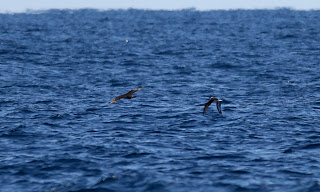 A couple more images of the Sperm Whale - what an experience!  You can see the blow that is at an angle since the blow hole of a Sperm Whale is on the left side of its head, pointing in that direction (photo by Ed Corey).  And below, another image of the tail as it dove (photo by Brad Sale). 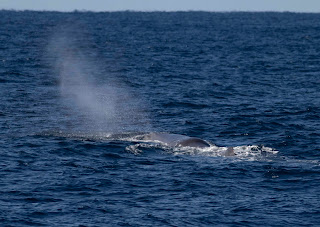 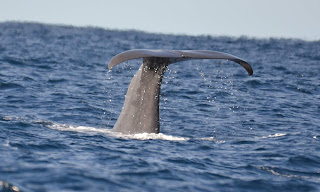 Another nice image of the Leatherback turtle (by Ed Corey). 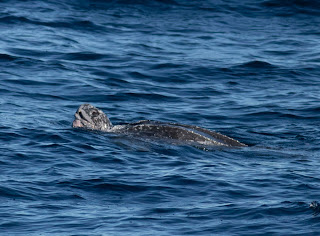 Posted by Kate Sutherland at 6:32 PM