Tropical Storm Michael brought some soundside flooding to the northern sections of Hatteras Island on Thursday night, but the winds had subsided and our channel to the ocean was still intact for our trip out on Saturday!  The winds were westerly in the morning and this gave us a steady procession of warblers for most of the day with at least six species identified offshore.  We were not sure how this would shape up for seabirding, but we need not have worried because we still encountered some nice groups of feeding shearwaters and the Black-capped Petrels were out there in force!  Brian had checked the sea surface temperature map before we left the dock and the hot water was to the south of us, heading offshore to the east.  This prompted us take a more southerly route in the morning from the inlet, but we found the nice, blue water of the Gulf Stream and had nice numbers of Audubon's Shearwaters before we even reached the shelf break! (photo of two Audubon's by Kate Sutherland) 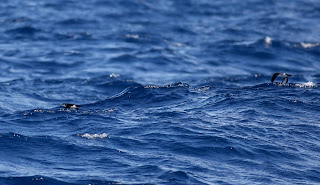 Black-capped Petrels were in their element with the increasing winds throughout the day and a few times my scans turned up 45 to 50 individuals stretched back in the chum slick!  They were attentive to the chum like last weekend, and we had many incredible passes as these dynamic flyers came to feed behind the boat!  A young Herring Gull flew up the slick and for the first time I saw some Black-cappeds harassing this species, they did not bother a young Great Black-backed Gull that came in a bit later. (photo of Herring Gull, Cory's, and Black-capped Petrels behind the boat by Kyle Kittelberger) 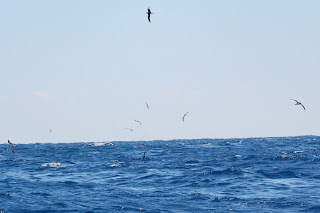 There was also some activity at one point up ahead of the boat and a couple of Black-cappeds were chasing one another around, and though the reason was never apparent to us, the moniker "gadfly" made so much sense!  It was a very bizarre display.  Other individuals were cruising up high, at times there were up to ten sailing in the clouds before they would dive back down to sea level and begin a more typical, arcing flight.  They stole the show again this weekend, and while the light was at times harsh, the photo ops were seemingly endless (Kyle Kittelberger). 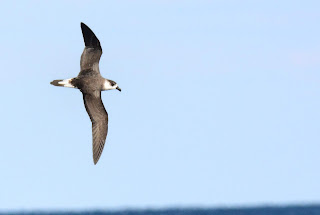 Heading back toward the shelf break just after noontime, our large shearwaters finally turned up!  We had a handful of Cory's in the morning, but were glad to finally encounter some feeding flocks that allowed everyone to have much closer views of both types of Cory's and some Great Shearwaters...all the while Black-capped Petrels were keeping up with us in the slick!  While we had a nice flight of Audubon's in the morning, there were not many in with these afternoon groups.  A couple of Wilson's Storm-Petrels came in to visit the chum slick and came close enough for some nice looks!  This time of year they can be hit or miss, so it was nice to see them.
Just over the shelf break, Brian spotted a huge Leatherback Turtle that stayed on the surface right next to the boat, taking a few breaths before sounding (Kyle Kittelberger). 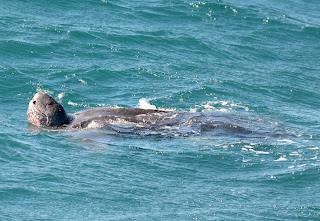 This was the best view of a Leatherback we have ever had, and the churning water was impressive as its powerful flippers readied it to dive!  Dr. Fred Alsop of East Tennessee State University had his Coastal Studies class with us on Saturday, so this was the first sea turtle many of them had ever seen!  It was another incredible fall day out there!  Thanks to everyone who joined us for the trip, and a big thank you to Dr. Alsop for joining us with his class!  Thank you also to Kyle Kittelberger who helped Brian and I lead the trip and contributed photos for this post!

Yes, a few more Black-capped Petrel photos, top two by Kate Sutherland, and you can see we had some in the green water in the bottom photo by Kyle Kittelberger! 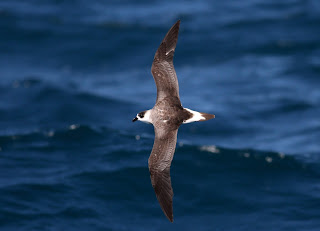 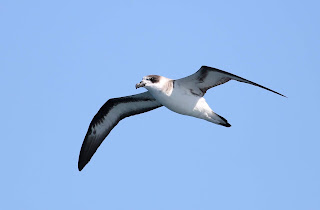 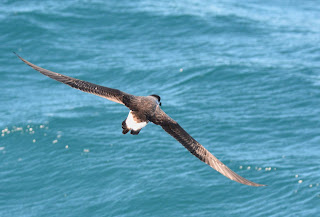 This bird looked to be an Atlantic Cory's (Kate Sutherland) 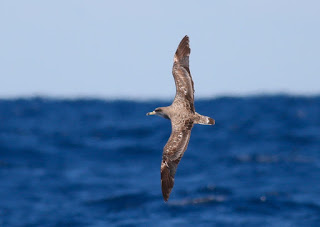 We only saw two Red-necked Phalaropes all day, but it was a little choppy for spotting them on the water!  (Kate Sutherland) 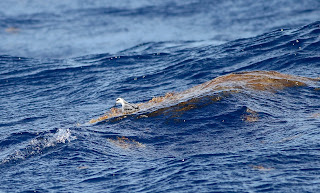 Kyle also captured this image of some of the many warblers we had offshore!  (from L to R: Northern Parula (1st year), Cape May Warbler, Black-throated Blue Warbler (male), and another Cape May Warbler) 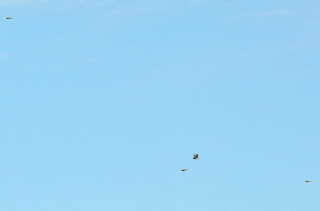 Another image of the Leatherback showing how it almost seemed to make a dent in the water before sounding!  (Kate Sutherland) 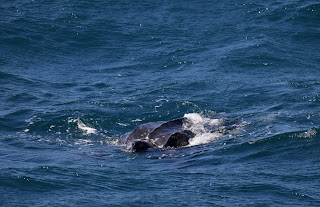 Finally, a few images from our sargassum dip with the ETSU students!  Top to bottom: both species of Sargassum - fluitans (L) natans (top R), a large male sargassum swimming crab (Portunus sayi), two photos in a row of a smaller, female swimming crab - dorsal and ventral (you can see she had eggs!), and finally a small pipefish!  (all photos by Kate Sutherland) 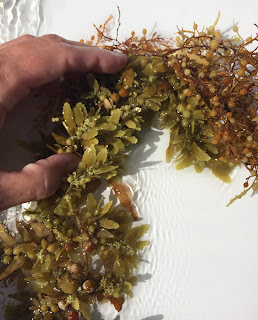 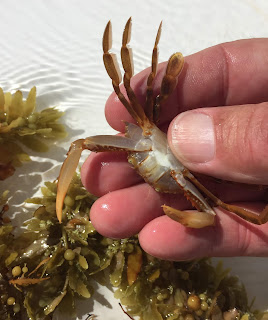 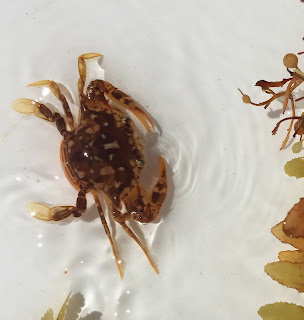 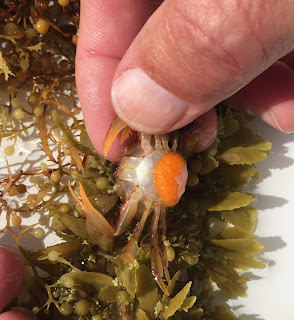 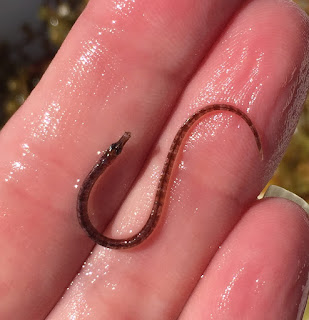