After being weathered out last weekend, we were excited to see the perfect window for a trip on Saturday February 8th!  But mother nature had other plans, and the weather system that moved through on Thursday night dropping inches of rain was followed by strong westerlies that pushed the water from the swollen Pamlico Sound onto the northern portions of NC Highway 12 on Hatteras Island.  This forced us to push back to our weather date, Sunday February 9th, and that morning we were excited to finally board our participants and head out into the sound still lit by the full moon! (Kate Sutherland) 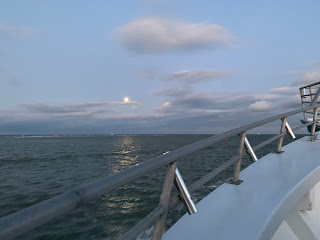 The sea surface temperature maps showed that the south and southwesterly winds from previous days pushed warm water right up past Avon.  Regardless, we hoped to find some winter seabirds around Diamond Shoals or on our way north, and while there were thousands of Northern Gannets south of Cape Hatteras, we did not see a single Razorbill!  Oftentimes gannets are a good sign for the possibility of a Great Skua lurking around, but we didn't turn one up on Sunday.  With water in the high 50s, we continued to the north in search of a temperature break with some cooler temperatures on the other side!  Unfortunately this water was 25 miles to the east of Oregon Inlet!  Fortunately we can use Oregon Inlet to get back to Hatteras by running down the sound on the inside of the island!  So we stuck it out and continued searching for seabirds with our loyal gull and gannet flock as we moved to the north (gannet face by Kate Sutherland). 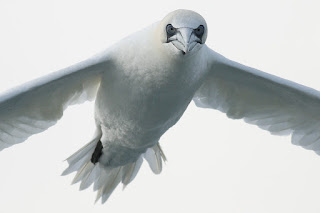 Soon after we reached the cooler water, temperatures between 50 and 52 degrees Fahrenheit, Brian began hearing news from the Oregon Inlet fishing fleet, they had several mako bites and farther offshore were even catching bluefin tuna!  Around this time there was a shark leaping out of the water in the distance, Brian thought it might be a thresher, but I didn't see it well enough to tell, I just saw a shape and a splash.  Thirty minutes later, another shark leaped from the sea much closer!  A common thresher shark!  This fish put on quite a show, leaping at least seven times close enough to capture!  As many of you probably know, threshers have a tail that is as long as their body.  They can use this like a whip to herd, confuse, and ultimately stun their prey.  There is only one genus in the family Alopiidae (this is derived from the greek word for "fox," as they are "clever like a fox"), and only three species in the genus Alopias; the one we saw was the common thresher shark, or Alopias vulpinus (species name is derived from the latin for "fox").  The elongated upper lobe of their caudal fin also allows them to accelerate to incredible speeds, high enough to launch them entirely out of the water!  Thresher sharks regularly display this behavior, and while the reason they do so is purely speculation on our part, some researchers think it could be a mode of communication or a behavior that helps to scare their prey species into "balls" or small groups that make them easier to stun, kill, and eat.  Who knows?  We were just excited to be in the right place at the right time to experience it! (incredible photo by Ed Corey!!) 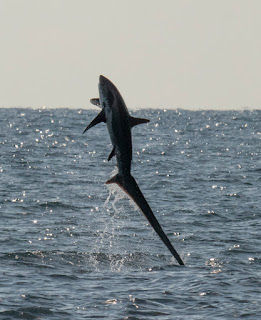 We headed inshore toward Oregon Inlet and the new Basnight Bridge, checking out our second lighthouse for the day, Bodie Island.  Finally some Razorbills were flying by, there were some Common Loons sitting around on the water, and we even had a quick glimpse of a mola mola, or ocean sunfish!  Suddenly there was some commotion up in the bow pulpit!  Alcid on the water, just ahead of the boat...DOVEKIE!!!  And it went right under us, diving to avoid the boat!  We stopped and waited, and sure enough, the little auk popped up next to a gull not too far from the boat!  Slowly we approached it to show everyone, and to our surprise, it was more than happy to be in the shadow of the Stormy Petrel II safe for the time being from the large gulls around us.  It allowed us to spend time photographing it, with our big lenses and cell phones alike! (photo by Kate Sutherland) 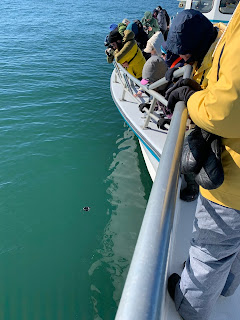 Videos of it swimming along the side of the boat and under the bow pulpit were taken.  What a way to end the day!  Weather was just right to navigate this inlet to the north, and as we pulled back into the channel that would take us to Hatteras Landing a couple of hours later, we were treated to the most gorgeous sunset. (shown here with the F/V Little Clam - Kate Sutherland) 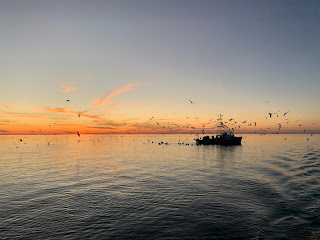 Thank you to everyone who joined us out there today!  Also a big thanks to Jesse Anderson for organizing a group from Forsythe Audubon to join us, and for helping us lead the trip along with veteran leader, Ed Corey!  Excellent job, gentlemen!  And thank you for contributing photos for today's post!

A few Dovekie photos, of course! (Top by Ed Corey, two below by Kate Sutherland) 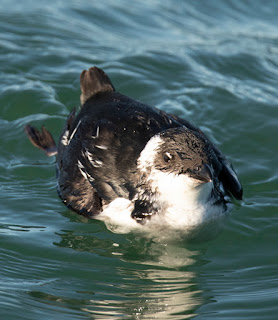 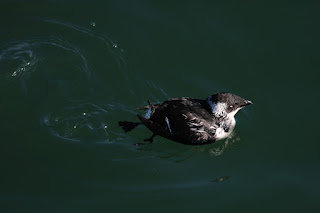 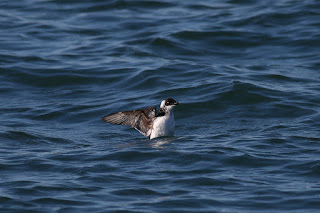 One of the few Razorbills that came close enough for a photo op!  (Jesse Anderson) 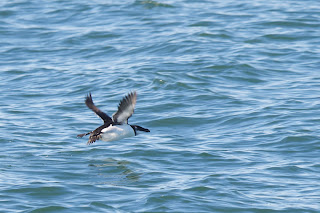 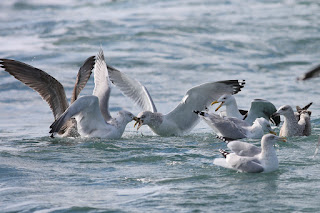 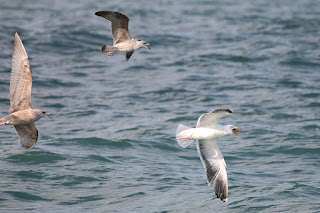 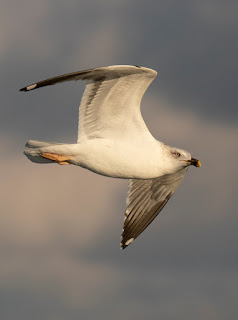 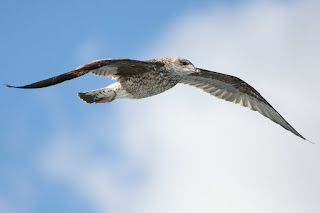 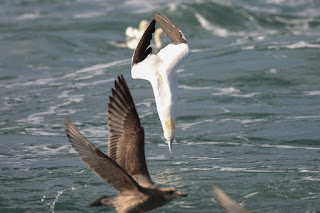 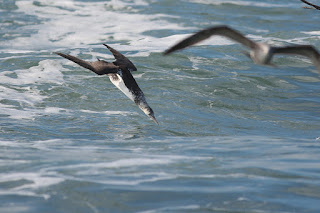 Bottlenose dolphins, these nearshore individuals are not as obliging for photos as their offshore cousins! (Kate Sutherland) 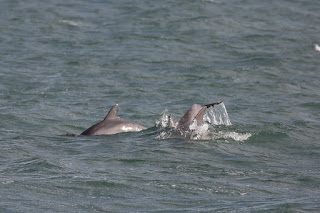 Ed Corey captured this image of one of the loggerhead turtles peeking over a wave! 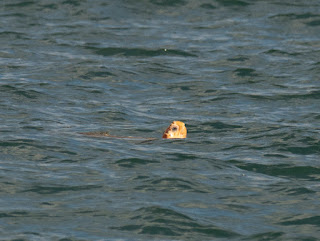 And a couple more images of the obliging thresher shark! (Kate Sutherland) A really cool way that we know these sharks use their long tails to stun and/or kill prey items is that they are often hooked in the tail by fishermen! 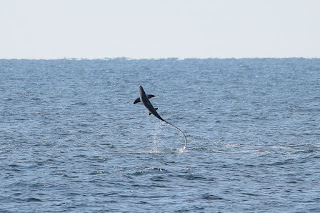 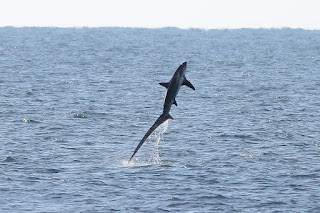 Posted by Kate Sutherland at 9:09 AM