Water temperatures near and offshore from Hatteras Inlet, around Cape Hatteras, and up to Oregon Inlet have been warm over the past week, so we were not sure what we might find on our first pelagic trip of the winter season.   A good sign of Dovekie and Razorbill beginning in early January gave us hope that we might be able to find something out there...  And we managed to pull it off!  While Great Skua was not in our fortunes, rarely is it ever on the bluebird days, we were able to find some Atlantic Puffins in the warmer water to the east of Diamond Shoals.  (record photo Kate Sutherland) 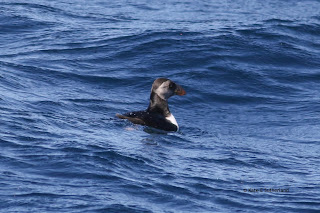 Dovekies were buzzing by near the inlet and we had steady numbers over the course of the day until we were back inshore in the afternoon.  A few of these cuties sat on the water for us to observe at close range!  (photo Ed Corey) 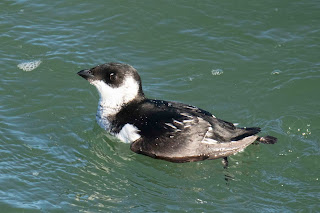 Razorbills didn't disappoint, but we didn't have any super close to the boat and certainly none that were as well behaved as this Dovekie!  While we hoped to find a nice temperature break, the water was more blended, but we did find about a ten degree increase from the inlet to where we had the puffins offshore.  The bluer water was about 66 degrees Fahrenheit.  The color difference is pretty clear in the puffin photo versus the Dovekie!  Just after we had our first puffin of the morning, an adult Pomarine Jaeger flew in to investigate our flock!  First it flew off behind us and we thought it was gone...but it came back for some crowd pleasing passes!  (photo Kate Sutherland) 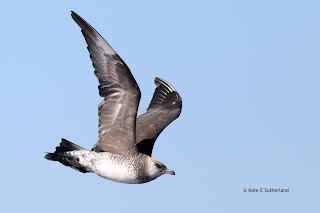 Participant Jamie Adams spotted our only tubenose of the day in that area too, a distant Manx Shearwater.  The usual winter beauties, Northern Gannets and Bonaparte's Gulls, were both around in good numbers and we had a nice flock of following gulls when we were nearshore.  As we worked back towards the inlet in the afternoon a near adult Kumlien's Gull (Larus glaucoides kumlieni) showed up in the flock!  These birds have varying degrees of dark in their primaries that is not present in true Iceland Gulls (Larus glaucoides glaucoides).  It stayed with us and fed for at least ten minutes so that everyone could have a nice view and a photo op if they desired.  Here you can see the smudging in the under tail that indicates it is not quite an adult!  (photo Kate Sutherland) 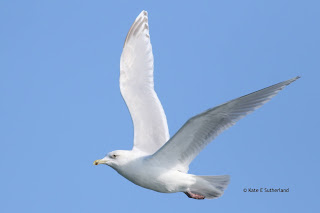 Nice way to end the day!  Loggerhead Turtles also put in a nice show around that time with two large individuals paying us no mind as they relaxed on the surface before diving.  Bottlenose Dolphins were also around and we had some luck in enticing a handful of them to bow ride nearshore - not something we see often!  Usually it's their larger, offshore cousins who like to join us to surf our bow wave.
A big thank you to everyone who joined us offshore!  Thank you also for paying attention to our public health guidelines, not the most fun to wear a mask on a boat...but everyone did a great job.  Thank you so much to our leaders Ed Corey and Steve Backus for joining us and helping everyone get on the birds (and for helping me with the chum!).  I also want to thank Ed for contributing photos for this post!  Our next trip on February 6 (obligatory weather date of the 7th) has space open, and following that we have space on the February 20(21) and 27(28) trips.  Let me know if you'd like to join us - Kate Sutherland (252) 473-9163 cahow1101@gmail.com
January 24, 2021 Target Species List
Common Loon - 2
Red-throated Loon - 18
Manx Shearwater - 1
Northern Gannet - 221
Bonaparte's Gull - 262
Kumlien's Gull - 1 sub adult
Dovekie - 45
Razorbill - 172
Atlantic Puffin - 9
Pomarine Jaeger - 1 adult
Other species of gull encountered were Laughing, Ring-billed, Herring, Lesser Black-backed, and Great Black-backed

Bottlenose Dolphin - 45 to 50
Loggerhead Turtle - 5
Sea turtle species - 1
Ocean Sunfish (Mola mola) - 1
Northern Gannets are always fun to watch and photograph!  We had a number of young individuals, but adults like this one were the dominant type!  (Kate Sutherland) 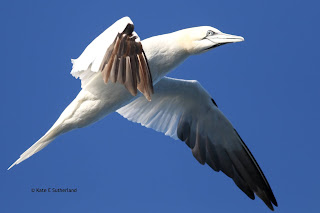 The Kumlien's Gull was quite photogenic as well!  We were lucky it was hungry and we had some good food for it to eat.  (Kate Sutherland) 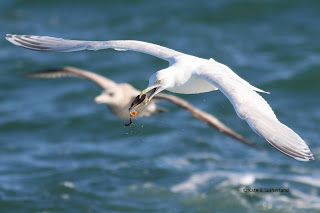 When it could keep away from the Great Black-backed Gulls!  (Kate Sutherland) 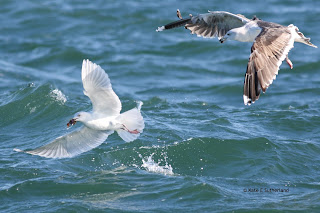 Lesser Black-backed Gulls (top) and Laughing Gulls (bottom) were mostly with us in the morning!  (Kate Sutherland) 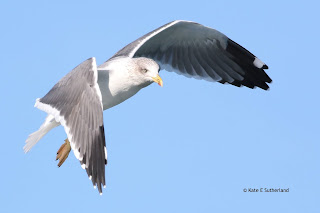 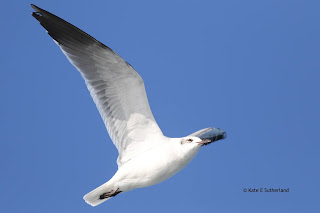 Another Dovekie photo, this bird was quite content to swim around right next to the boat.  Their feet are placed far back on their bodies so you can see them in a number of the photos as it paddles around (see Ed's above as well!)!  These little auks feed on small prey items like crustaceans (ie copepods) and other zooplankton or small fishes.  (Kate Sutherland) 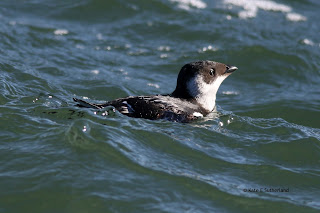 Another image of the Pomarine Jaeger.  I wanted to include this image because it shows the Diamond Shoals Light Station in the background!  (Kate Sutherland) 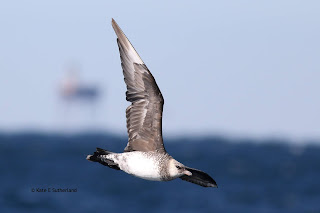 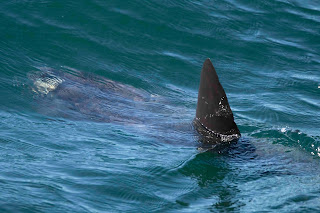 Posted by Kate Sutherland at 7:59 AM