Tubenoses, like our petrels, storm-petrels and shearwaters, are truly masters of the wind. They’ve learned to effortlessly ride the gusts and gales to cover great distances in their search for food. However, sometimes the winds are less cooperative. So was the case for our trips this weekend! After several days with good winds out of the East and Southeast, we were left with light and variable conditions for both Friday and Saturday. When this happens, we change strategies and start looking for birds on the water or feeding activity over bait fish schools.
The journey to the deep on Friday was quite pleasant, with low swells and patches of slick water to scan. Halfway to the shelf break, we spotted a flock of Red-necked Phalaropes working one of these slicks (Kate Sutherland). 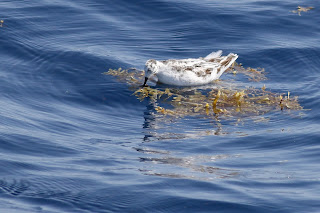 Though a bit jumpy at first, everyone was able to get on these “off-shorebirds," along with a pair of Audubon’s Shearwaters. A short time later, one of our spotters noticed a high flyer in the far distance, seemingly heading towards the boat. “High Flyer” is a term we use for any birds that spend time above the water, such as terns, boobies, tropicbirds or jaegers. The bird in question revealed itself to be a young Long-tailed Jaeger, passing behind us, but close enough for all passengers to see.
After leaving the continental shelf, we were able to find a few scattered birds on the water. Black-capped Petrels were shy, taking to the air well before we got close. A group of storm-petrels held mostly Wilson’s, but a Band-rumped flushed with them, showing its longer wings and more soaring flight style. Around 1pm, we came upon a loose flock of Bridled Terns, both adults and young, resting and being quite vocal. It was a treat to hear the birds calling back and forth to each other, as the parents came in to check on their offspring! (Ed Corey - adult left, juvenile right and Atlantic Tripletail swimming nearby!) 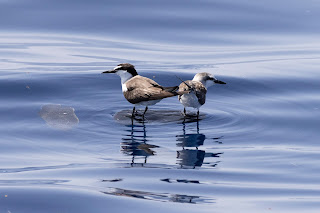 Saturday’s trip brought similar weather, but also added a few new species for the weekend. One of our participants spotted an adult Sabine’s Gull on the water, which gave brief views as it did a lap around the boat and flew off behind us. The deeper water was a bit slower, but we were able to jump a Band-rumped and Leach’s Storm-Petrel traveling with a lone Wilson’s, a great comparison of our two larger stormies with their smaller distant cousin! (Ed Corey - Band-rumped above and Wilson's below) 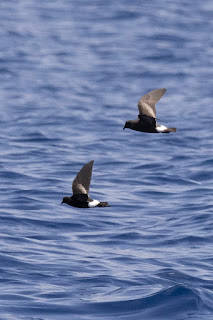 Around 10, our leaders spotted a large bird leading a ship further out, so we motored after it. Unfortunately, we were unable to catch up, but photo review afterwards showed this to be a Brown Booby! While watching the booby, we began to see quite a few tropical terns gathering and feeding ahead of us. Sooty Terns are larger and more buoyant than Bridleds, and we were able to count at least 60-70 individuals in this split flock! We were even able to see several Sooty Terns resting on the water, an uncommon but not unheard-of sight!
It took a while to get the birds interested in our slick, but eventually the storm-petrels fell in behind us. Black-capped Petrels and Band-rumped Stormies visited the gathering of Wilson’s. Though photo opportunities were not as numerous as we would hope, our participants gained confidence in identifying our Gulf Stream specialties at a distance!
~Thank you to everyone who joined us offshore for both of these trips!  Thank you also to our leaders, Ed Corey, George Armistead, and Jacob Farmer, and another thank you to Ed for writing the post, assembling the eBird lists, and contributing photos since I could not attend the trip on Saturday!!  -Kate Sutherland
Species List for August 27 / 28
Black-capped Petrel - 20 to 22 / 56 to 59
Scopoli's Shearwater - 3 / 0
Cory's / Scopoli's Shearwater - 2 / 34
Great Shearwater - 2 / 0
Audubon's Shearwater - 5 / 5
Wilson's Storm-Petrel - 88 / 78 to 81
Leach's Storm- Petrel - 0 / 1
Band-rumped Storm-Petrel - 4 / 7
Brown Booby - 0 / 1
Red-necked Phalarope - 131 to 136 / 40
shorebird sp. - 0 / 2
Sabine's Gull (adult) - 0 / 1
Sooty Tern - 5 / 111 to 118
Bridled Tern - 21 / 3
Sooty / Bridled Tern - 3 / 5
Black Tern - 10 / 3
Long-tailed Jaeger - 1 / 0
Atlantic Bottlenose Dolphin (offshore population) - 30 to 35 / 50 to 52
Black-capped Petrels from Friday's trip - dark and light forms on the water (Ed Corey) then the light individual in flight (Kate Sutherland) 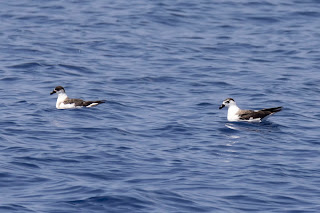 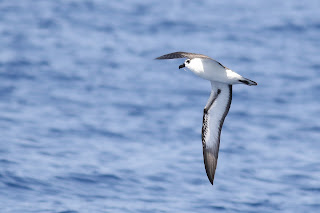 It looked like both of these birds were Scopoli's Shearwaters.  Checking both underwings, one individual had a marginal amount of white on the underside of the outermost primary in one wing and close to 45% in the other, while the second individual had more than 30% in each. (Kate Sutherland) 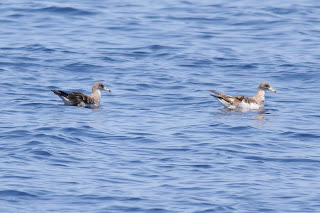 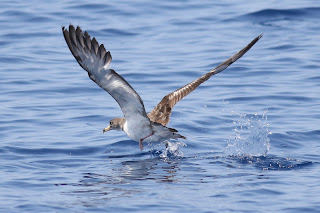 We just had a couple of Great Shearwaters on Friday, but they were cooperative! (Kate Sutherland) 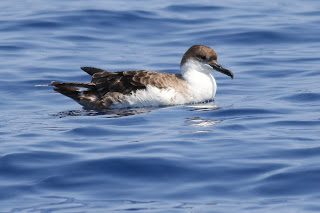 Audubon's were seen on both trips (Ed Corey) 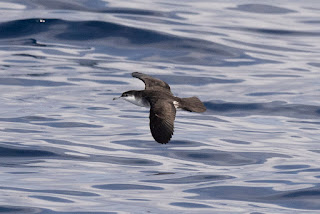 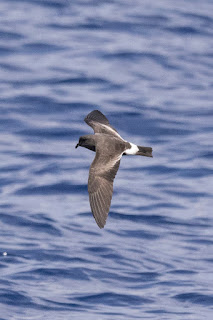 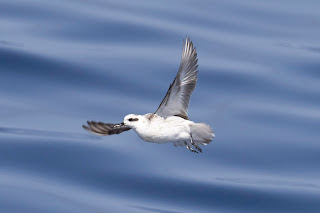 And the terns!!  They were truly one of the highlights of the weekend!
Adult and juvenile Sooty Terns (Ed Corey) 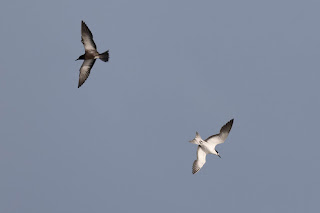 Sooty Tern with what appears to be a small flyingfish! (Ed Corey) 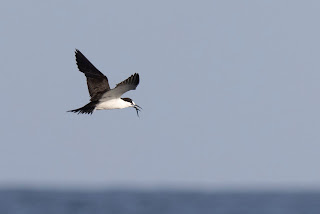 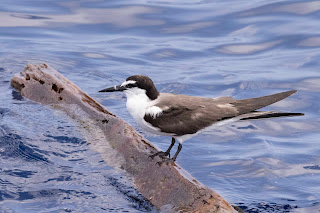 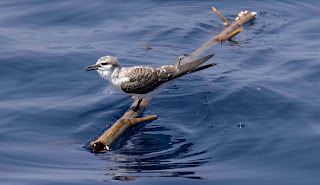 And each in flight!  (adult - top by Ed Corey, juvenile - bottom by Kate Sutherland) 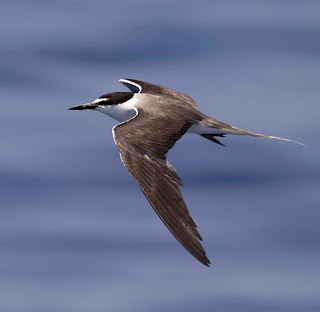 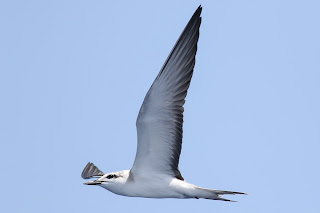 This military aircraft buzzed us a few times out there on Friday - and yes, it was LOUD!  (Kate Sutherland) 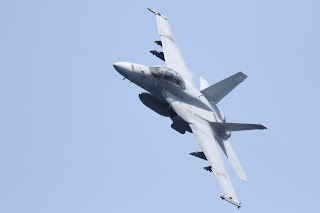 Posted by Kate Sutherland at 1:11 PM