Labor Day Weekend looked interesting with northeasterly winds on Saturday and light and variable winds on Sunday coupled with some easterly swell, so our hopes were high as we headed out into choppy seas on Saturday!  The features for both days were shearwater flocks, these flocks were pretty easy to spot thanks to the Sooty Terns flying above most of them.  We love beehives, the term we use for feeding flocks of seabirds, because you just never know what you might find in them.  Luck was on our side and we had excellent views of a number of species in these flocks over the course of the weekend.  In today's post I think we'll walk through each day, for while they had similarities in the form of these multi-species feeding flocks, each was also unique.
Saturday we had some wind so it was choppy and we headed in our usual direction to the south southeast in the morning.  We started to see shearwaters and had a couple of Bridled Terns before we even reached the shelf break!  Then we had what looked like a young Black-capped Petrel join us to check out the fish oil slick soon after we crossed into the slope waters.  Interestingly enough, we had a couple of Black-cappeds with us at the end of the day as we approached the shelf!  Usually these sharp looking gadfly petrels are in deeper water (Kate Sutherland). Our first feeding flock had almost 30 Sooty Terns associated with it and it was incredible to hear the young birds as they swooped over the boat with their parents nearby (youngster by Ed Corey). 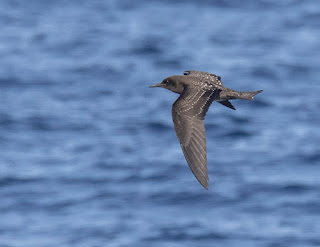 We had Scopoli's, Cory's type, and Audubon's Shearwaters in this group along with some Black-capped Petrels and Wilson's Storm-Petrels.  A Band-rumped Storm-Petrel briefly visited the group but did not show very well, and an immature Pomarine Jaeger was chasing Audubon's around also!  The next flock had fewer Sooty Terns but held a couple of Great Shearwaters and a young Long-tailed Jaeger!  There were also some Red-necked Phalaropes in the area (Ed Corey). 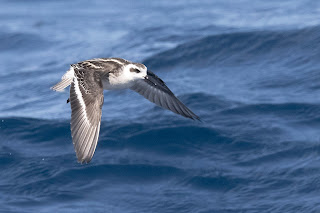 Just before noontime we finally had a more cooperative Band-rumped Storm-Petrel and a good number of Wilson's Storm-Petrels stayed with us throughout the day!
By Sunday the wind had fallen out and we had calm seas.  The Gulf Stream Current, which had been slack on Saturday (we even had reports of some down current), was again not running hard close to Hatteras (less than a knot), so we headed to the east!  This put us a bit north of the ground we would usually cover and we were hoping to see what type of life was up there without running the risk of being swept too far to the north by the Gulf Stream.  Again we had Cory's, Scopoli's, Cory's type (Kate Sutherland), and Audubon's Shearwaters on our way offshore. 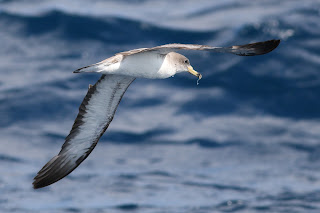 There were also a number of Common and Black Terns around.  Just over the shelf break we began to see flocks of shearwaters on the water and feeding, mostly Cory's types, and we began to travel from flock to flock to see what we could turn up!  Again we had the Sooty Terns attending the flocks with the calling juveniles and adults, one of these flocks also had a couple of Bridled Terns and we were able to see the differences between the larger, darker Sooty Terns and the smaller Bridleds with their grayer backs, pale napes, and whiter under primaries!  We were moving from flock to flock for most of the day and had over 400 Cory's types tallied by the time we reached the shelf break again in the afternoon.  Black-capped Petrels and Wilson's Storm-Petrels were cooperative in the slick, but we didn't turn up a Band rumped on Sunday.  We did, however, find a perched adult Bridled Tern that allowed us to approach for incredible views and we saw its youngster a few minutes later checking out some schools of small flyingfishes and Balao, a cousin to the Ballyhoo!  There was a lot of life out there so of course I wanted to dip some Sargassum and see what we could find...and while a few of us were sorting through that two young Long-tailed Jaegers flew in to check us out (Ed Corey)! 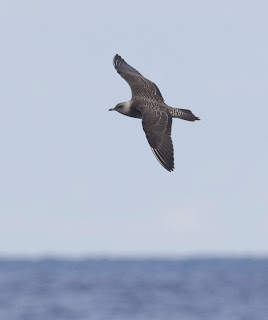 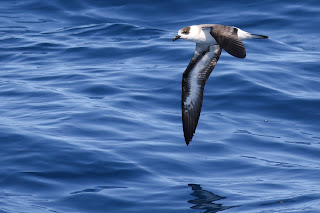 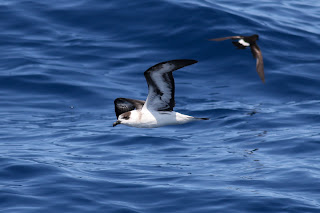 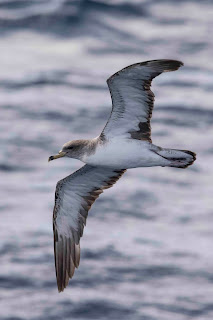 And more Scopoli's Shearwaters, here you can see one in the center of this feeding group that is composed of Cory's types, Scopoli's, and Great Shearwaters (Kate Sutherland) 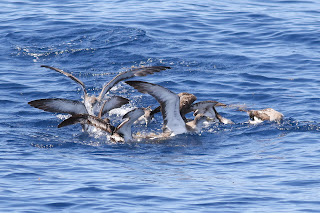 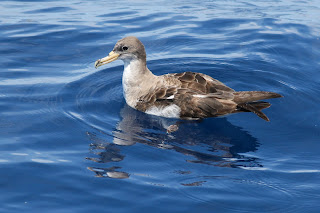 Great Shearwaters were very cooperative near the boat! (Kate Sutherland) 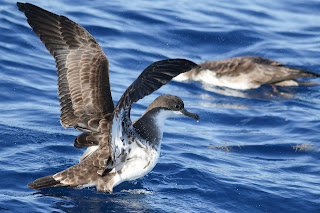 As were Audubon's Shearwaters!  This was a treat because sometimes these small black and white shearwaters can be a bit boat shy.  (Ed Corey) 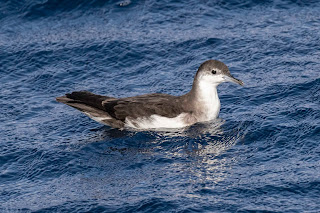 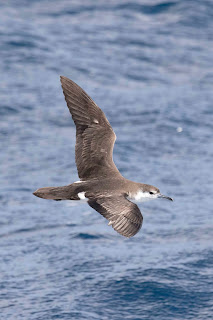 Audubon's are usually found around Sargassum since they feed on the creatures associated with this floating brown algae.  This one dove next to us and surfaced with some on its back! (Kate Sutherland) 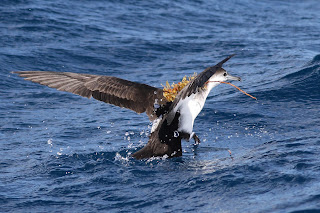 A couple more views of some Sooty Terns!  Here is an adult and the underside of a juvenile (the upperparts are visible in Ed's photo in the blog text!) (Kate Sutherland) 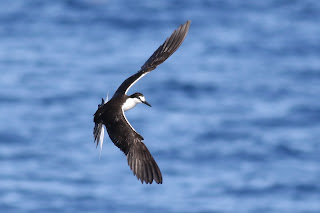 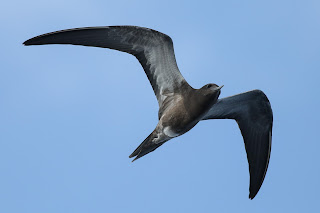 And for comparison, here is the perched Bridled Tern from Sunday.  You can see the back is much grayer than the adult Sooty Tern pictured above.  (Kate Sutherland) 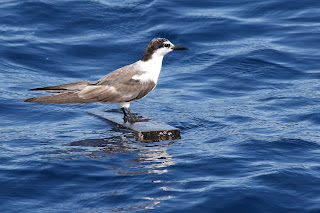 Here are a few pictures of the cooperative Atlantic Spotted Dolphins!  A typical spotted individual (top - Kate Sutherland) and a couple of typical younger individuals without spots below (Ed Corey). 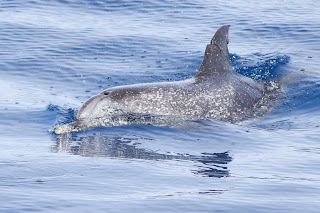 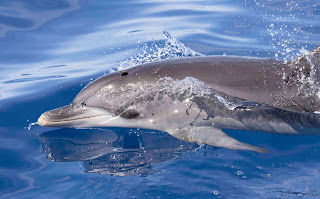 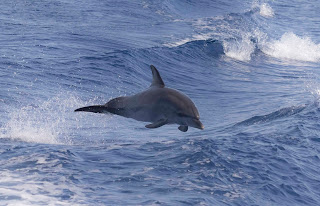 It was really cool to see these schools of fish leaping from the water near the boat, but very easy to get a good photos of them!  These look like Balao (Hemiramphus balao). (Kate Sutherland) 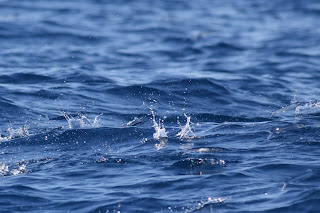 And some young flyingfish!  (Kate Sutherland) 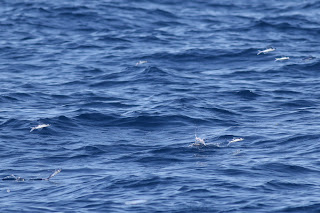 We found some really cool creatures in the Sargassum that we dip netted!  Here are participants Heather Levy and Peter Kleinhenz checking them out in some of our trays.  The weather has to cooperate for us to be able to do this! (Kate Sutherland) 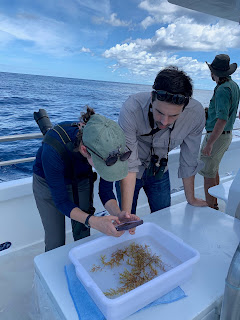 Here is a closeup of the Sargassumfish (Histrio histrio) in some Sargassum natans, one of the species of Sargassum we commonly find offshore from Hatteras. (Kate Sutherland) 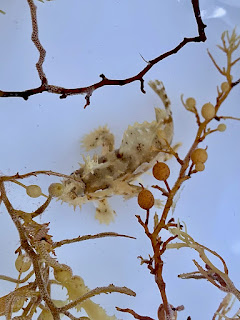 This photo has four different species, three fishes and one crab, in addition to the Sargassum natans you can see hydroids (the feathery looking creatures) and bryozoans (the crusty looking covering on the algae are their homes!) attached to the algae!  There are about 50 obligate species that are associated with Sargassum!  (Kate Sutherland) 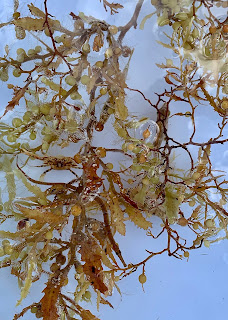 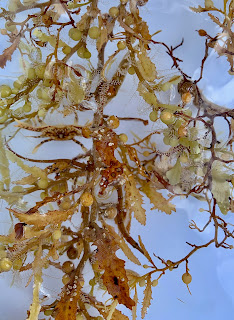 Posted by Kate Sutherland at 2:32 PM