Southwesterly winds have been continuing to prevail for an extended period of time with the magnitude dropping to a light breeze for our trip on Friday.  We were greeted by a cumulus cloud column on our way out to help mask the hot summer day ahead of us in the Gulf Stream.  A few Red-necked phalaropes were spotted as we made our way, and a distant young Pomarine Jaeger was not to be bothered as it made its way along a straight trajectory to its destination above the horizon.
As we made our way into the deep water, the winds started to calm down and the sea slowly transitioned into a sheet of glass.  Rare days like this are excellent for spotting birds sitting on the water, but can pose ID challenges around flight behavior as birds tend to stay low to the water with slow consistent flapping as opposed to engaging in their more traditional seabird behavior, bounding up above the horizon.  In spite of this - we were still treated to excellent views of a good variety of seabirds like this clean dark faced Black-capped Petrel (Bob Fogg). 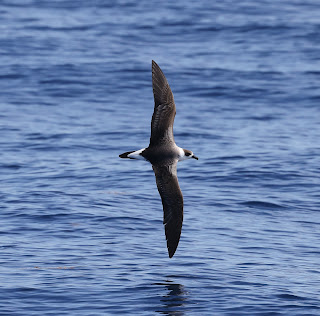 We didn't accumulate large numbers of Wilson's Storm-petrels as many have moved north to cooler waters, but it was a treat to have great views of Band-rumped Storm Petrels making passes by the boat for everyone to see.  This Band-rumped Storm-petrel took off from the water, sitting with an Audubon's Shearwater and demonstrates some of the variability showing a completely dark upperwing with almost no carpal bar present (Bob Fogg). 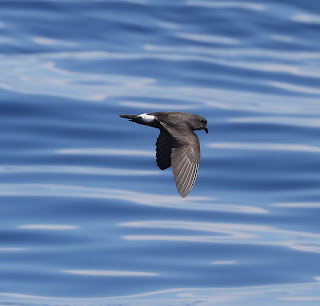 Even with the light SW winds, we had a couple Leach's Storm-petrels make some point blank passes for all to see! (Bob Fogg) 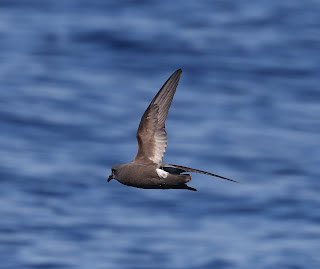 By mid-morning, the seas had flattened out entirely and we were spotting some Black-capped Petrels sitting on the water, such as this group of dark-faced birds. (Bob Fogg) 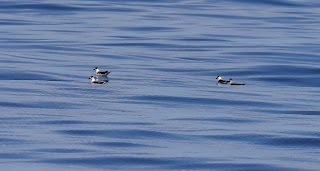 A second Pomarine Jaeger made a distant pass, again not to be bothered as it continued along its way.  Shortly after, a second summer Bridled Tern was spotted, surfing on a small piece of flotsam.  Everyone enjoyed the views as we passed right by it while it rested for a bit. (Kate Sutherland) 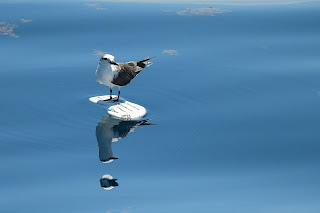 We were enjoying more great looks of an Audubon's Shearwater when someone spotted a fin sticking out of the water.  A hammerhead shark was basking on the surface and allowed some decent views before submerging. (Bob Fogg)

After a good day offshore, we were headed back to the inlet when some participants spotted a few terns flying above the horizon 10 miles out.  Sooty Terns - nice!  Kate watched them join a kettle of 14 individuals high up in the sky to round out the day. (Bob Fogg)

The winds shifted to light SE for the second day.  Even though the magnitude of the wind was the same as yesterday, the southeasterly component made for a more choppy sea surface.  We were treated to a flock of Red-necked Phalaropes flying by the bow of the boat on our way offshore.  Brian heard of some shearwater activity reported by some fishing boats, and sure enough we were able to find them!  We saw a few Great Shearwaters (which were not present on Friday) and a couple dozen Cory's and Scopoli's Shearwaters (Bob Fogg). 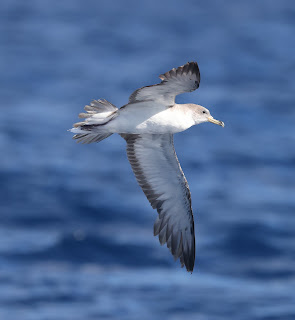 On we go into the deep...
TROPICBIRD!  Shouts propagated from the bow of the boat to the back of the boat.  Sure enough, this White-tailed Tropicbird materialized out of the blue sky and was suddenly circling our boat to check us out. (Bob Fogg) 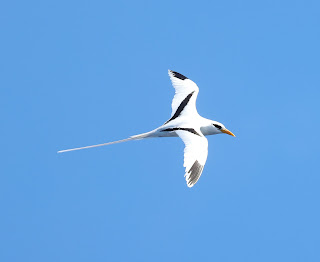 Everyone had excellent views for a number of minutes until it vanished as quickly as it appeared.
For another day we had great views of Band-rumped Storm-petrels making some close passes, with a couple individuals hanging out back in the slick for those interested in more distant ID challenges.  One of our Wilson's Storm-petrels hung around for a while, on and off, and had an anomalous almost white carpal bar. (Bob Fogg) 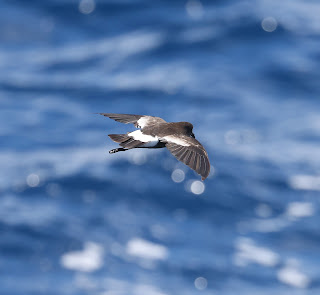 These individuals are always interesting to get a sense of how long we retain birds.
Late in the afternoon, Daniel spotted another second summer Bridled Tern resting on a float, to which it struggled to keep its balance. (Bob Fogg) 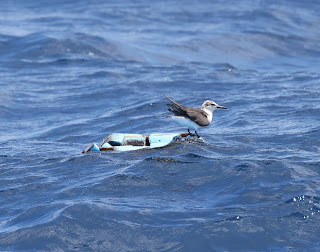 We were escorted out of the deep water by a lone Band-rumped Storm petrel to top off the set. (Bob Fogg) 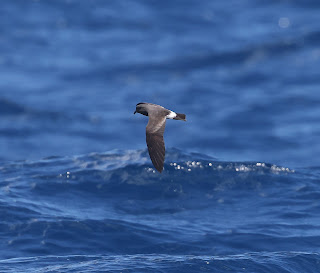 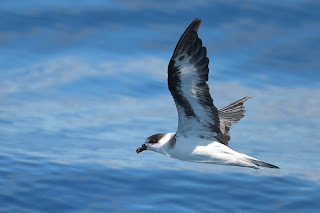 And here is Bob Fogg's image of the flock pictured above after taking off! 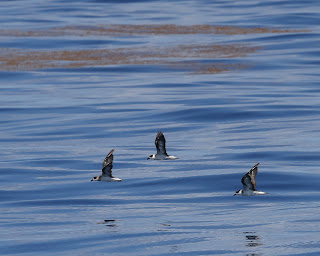 One of the Great Shearwaters seen on Saturday's trip (Bob Fogg) 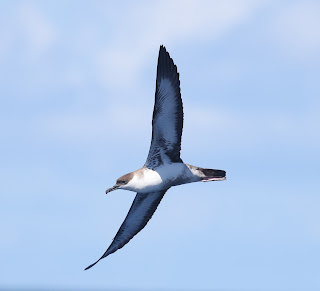 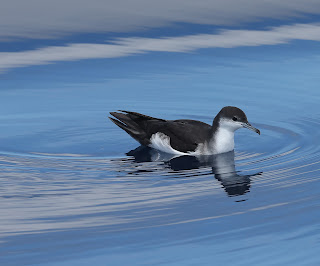 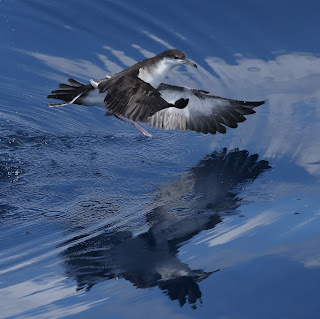 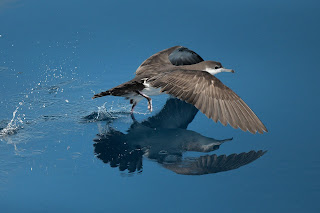 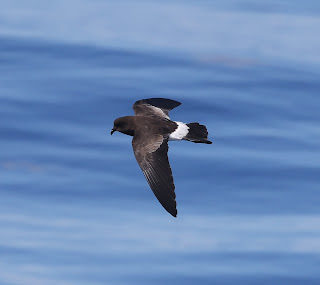 Reflections on a Band-rumped (Kate Sutherland) 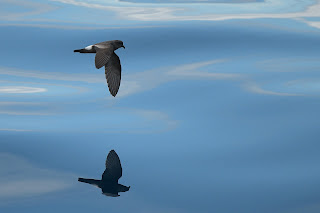 A few more nice captures by Bob Fogg from Saturday's trip, you can see how short the legs are and that the bill is a bit more stout than the Wilson's pictured above! 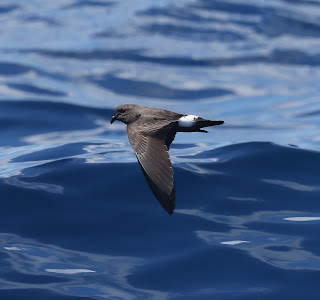 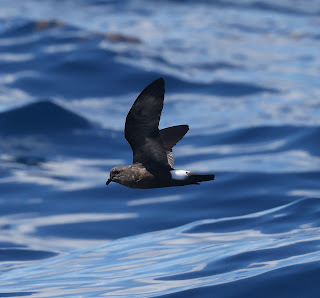 Another view of the White-tailed Tropicbird (Bob Fogg) 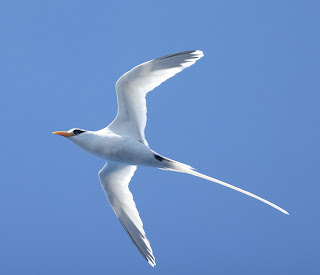 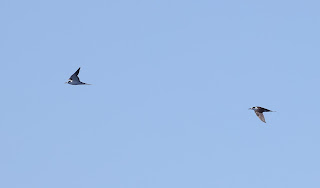 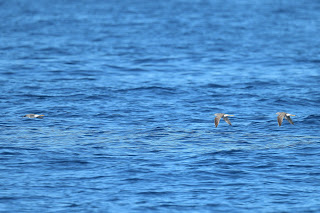 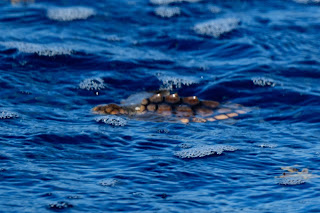 And a flyingfish hitting the water as it turned back on its path! (Kate Sutherland) 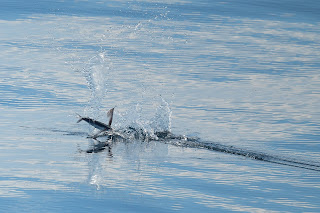 Posted by Kate Sutherland at 10:57 AM