The Outer Banks had been experiencing three weeks of southwest winds prior to our trips this weekend. When these winds maintain this direction for a few days, numbers and diversity can occasionally decrease, but there’s always the chance for a large flock of shearwaters or a rarity to show up under these conditions to make the trip worthwhile!
Friday’s venture into the deep was a bit rough, with the 20+ mph winds building up the seas on the continental shelf. Once we reached the deeper waters off of the shelf, the seas diminished to a much more comfortable 3-4’, and we were better able to scan our surroundings. The current was ripping to the northeast at roughly 5 knots, so staying in one spot was not really in the cards.
Numbers were quite low, but there were still some of the regular species to see out there! Audubon’s and “Cory’s-type” Shearwaters, including at least one of the Mediterranean-breeding Scopoli’s, coursed around the boat. After a short time, we started to pick up a few distant Black-capped Petrels, perfectly at home in the windy conditions. Once they caught scent of the chum and fish oil, they became much more obliging, and all on board were able to study the distinctive field marks of these stunning birds. (Kate Sutherland) 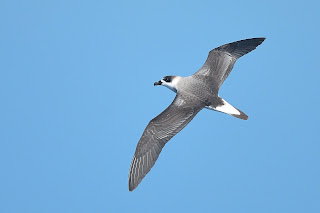 A few Sooty Terns made passes throughout the day, though never as close as we would have liked. A handful of Wilson’s Storm-Petrels eventually joined us in the slick, pattering their feet on the water as they picked up tasty morsels from the ocean’s surface. And in the afternoon, a report of a fin near some Sargassum lead to a nice encounter with a moderate-sized hammerhead shark, either a Scalloped or Carolina (these are cryptic species and require a count of the vertebrae to determine the correct ID, photo Kate Sutherland). 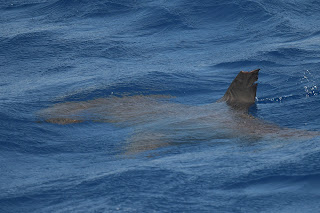 Because of overnight conditions, Saturday’s trip almost didn’t go, but a revised forecast gave us confidence we could make it back out to the Gulf Stream. With a little later start, we headed out from the marina. Not long after we made it over the shelf, Brian spotted an incoming storm-petrel on the bow: a Band-rumped! (Ed Corey) 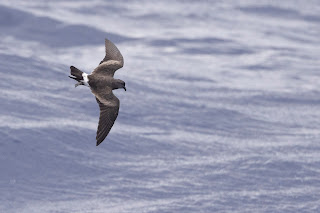 We were able to observe several of these longer-winged storm-petrels throughout the day, with great looks at them in flight as well as feeding in the slick along with a few more Wilson’s than were seen the previous day.
Black-capped Petrels were also more numerous and made close passes to the boat most of the day. (Ed Corey) 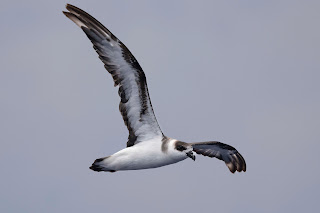 Audubon’s Shearwaters were less approaching, and in the wind were exhibiting their “Pseudodroma” behavior, where they could almost be mistaken for a small petrel at a distance. At one point, a Bridled Tern joined our attending storm-petrel flock, another new species for the weekend! Our ride back brought us along a current change, where we saw a few more Bridleds at closer range as they searched for food in the accumulated weed line (Ed Corey). 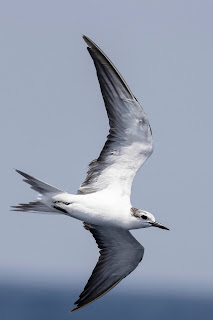 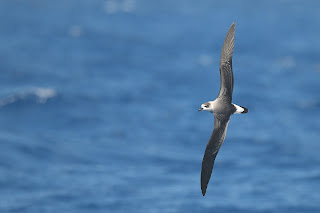 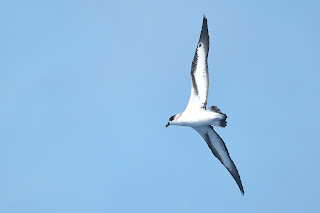 And they were a bit more cooperative on Saturday! Here is another dark-faced bird in primary molt. (Ed Corey) 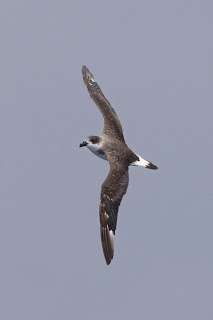 Wilson's Storm-Petrels were not very cooperative on Friday, but at least you can see the yellow webbing on the feet in this image (Kate Sutherland)

Ed's picture in the text portion of the blog shows the short legs of the Band-rumped Storm-Petrel, here you can see it as well, followed by another dorsal view (Ed Corey) 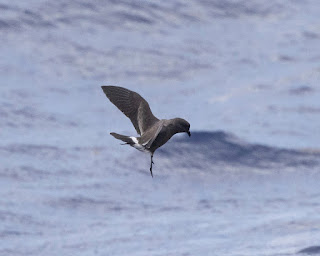 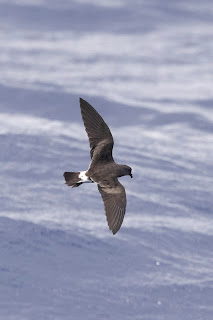 Sooty Terns were not very obliging either on Friday's trip, but here is a record shot that shows the dark under primaries well, which are in contrast to the white seen in those of Bridled Terns illustrated by the image in the text (Kate Sutherland) 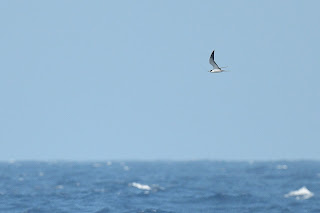 Posted by Kate Sutherland at 6:53 PM