It was a bit breezy for our pelagic trip this weekend, but there were no complaints about it being cold. Temperatures were in the mid to high 50s- about 30 degrees warmer than the last trip! The inshore waters south of the Cape were in the 60s, which is warm for February, but not that unusual because a strong southeaster (which we had on Monday) can bring water from the Gulf Stream in all the way to Diamond Shoals. I decided to go out around the shoals during the morning on our way to the northeast as the colder water had plunged southward over the previous couple of days such that it was a bit south of Diamond Tower according to the latest satellite images. Clouds had moved in and there was no image for Saturday morning to tell us that water had already started moving back up the beach, and we didn’t really find what we were looking for until we got about 10 miles northeast of the tower. There we found a nice color change and a strong break from mid 50s to high 60s.

Before we got to the change we already had a nice start with good numbers of fulmars, a Glaucous Gull (photo below by Irvin Pitts), 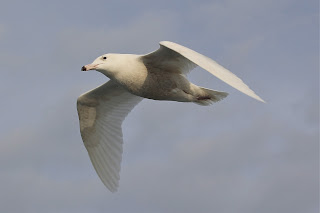 and plenty of Razorbills. The color change produced good numbers of Bonaparte’s Gulls and a modest number of Red Phalaropes (photo below by Irvin Pitts), the latter of which kept moving ahead of us as we followed this break. 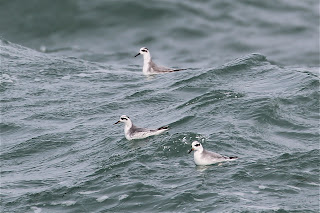 There were also plenty of Razorbills on the change and they were very bold and close, perhaps on account of the choppy conditions. It seems like they are a bit more skittish when the sea is smooth. With the sea behind us mostly we had a decent ride along the change. We were about 14 miles off the beach and there were still a few Red-throated Loons and Forster’s Terns around. We had a quick look at a Dovekie, which flushed and flew away, and that kept us hoping for a better encounter. Our persistence paid off when we found a second Dovekie and that individual stayed put for a close study (photo by Kate Sutherland). 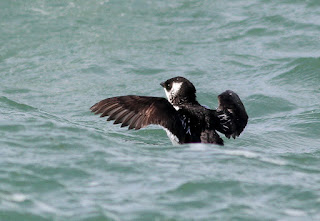 It was maybe a little too much a show off and we left after it had a close shave with a Herring Gull. Fortunately, it decided to dive when the gull tried to snatch it. We threw some chum and led the gulls back inshore. The inshore waters were cold and not so birdy. It was in the mid to high 40s north of the shoals, and the water was not very pretty, which explained all the auks out on the change. If the water is not too turbid, we usually find them closer to the beach.

I was expecting a rough ride back after we got across the shoals, but it really wasn’t that bad considering how hard the wind had been blowing from the south earlier. It slacked up a little bit in the afternoon and there was not as much wind near shore as there was out in the Gulf Stream. Unlike last weekend we did not encounter a skua on our way back, but it was a good day. It had been a great day for fulmars. This is not a species that we find in numbers every winter and on this trip we saw the range of variation, including the beautiful “Blue Fulmar”(photo by Kate Sutherland). 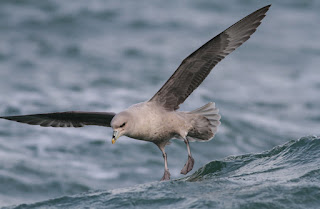 It was a good trip with good light for photography and lots of close hungry birds. I would like to thank everyone who joined us for the trip and our leaders, Kate Sutherland and Ellison Orcutt. As usual, Kate got some great photos to illustrate the report and participant Irvin Pitts let us use a few of his as well. 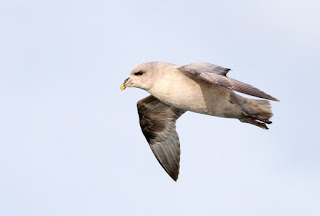 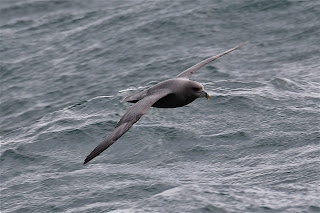 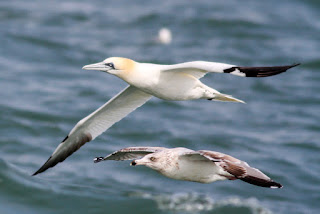 Two images (Kate Sutherland) of the extremely photogenic Northern Gannet.  These birds can look quite intent when following the boat - we only saw three or four subadult individuals on Saturday's trip. 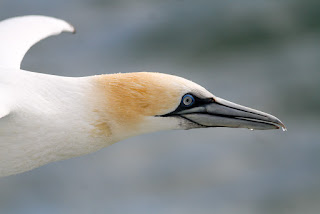 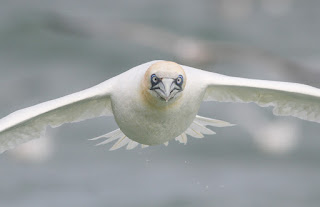 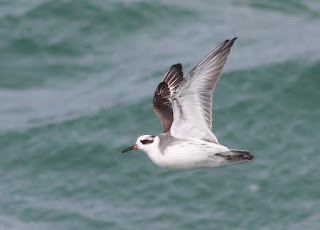 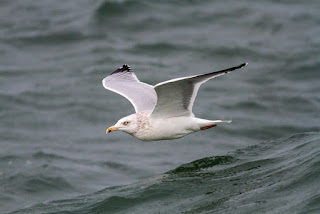 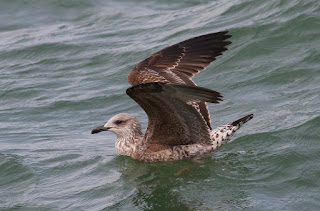 A different perspective, but one we see often from the stern of the Stormy Petrel II! Third winter Lesser Black-backed Gull, from below (Kate Sutherland) 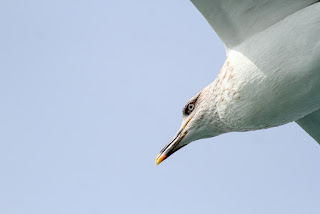 This little guy stuck around long enough for everyone aboard to have an excellent view! (Kate Sutherland) 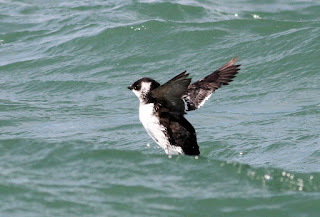 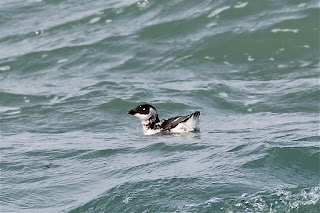 One of the Razorbills we found on the temperature break, they were very cooperative for photographers! (Kate Sutherland) 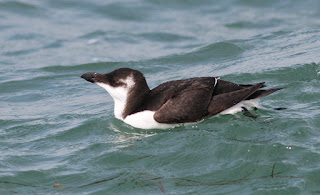 Posted by Kate Sutherland at 10:06 PM