Well, the weather was finally cooperative this month, but the water offshore...not so much!  We had an idea what we might find this past weekend, what we did not know was that the cooler water was way to the north offshore of Salvo!  As it was, it was a gorgeous day and our faithful gulls and gannets were hungry for our delicious mix of Menhaden chunks and ground beef fat (photo by Kate Sutherland). 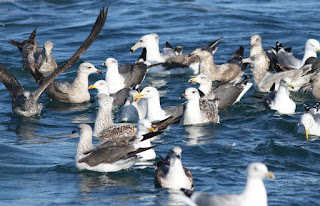 A young Glaucous Gull flew into check us out before we were even through Hatteras Inlet!  This individual did not stick around for long but it was obliging enough for everyone aboard to have a good look before falling behind.  (Photo below courtesy of Middleton Evans) 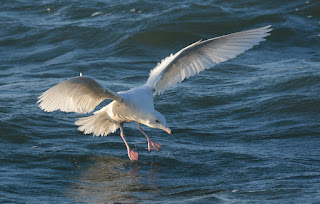 A little after 0900 we had a Manx Shearwater fly by the boat and across the stern, not close, but not too far to identify naked eye, a nice surprise for the morning!  We saw a few Red Phalaropes, not very cooperative in the choppy water, and finally had a Northern Fulmar just after 1000!  Mark Vukovich was kind enough to let us use his Northern Fulmar image here! 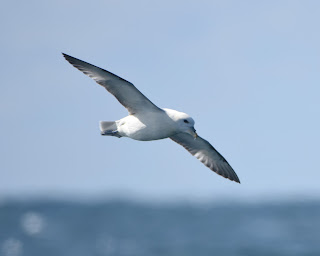 At least a couple of these tubenoses made some close passes by the boat so that everyone could see them...a treat since only four were seen over the course of the day.  As we cruised offshore we saw some Loggerhead Turtles and collected more Lesser Black-backed Gulls behind the boat, our participants enjoyed studying these striking gulls (photo by Kate Sutherland). 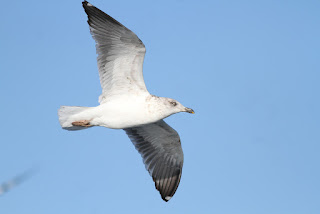 We finally found a handful of Razorbills offshore of Salvo where there was some cooler, but not necessarily clearer, water.  Here also we discovered some Humpback Whales and more activity than we had seen to the south.  (photo of Razorbill with Salvo in the background by Kate Sutherland) 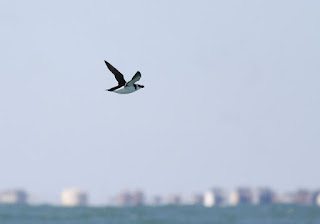 As we steamed back to Hatteras Inlet Brian spotted a large whale off the beach that turned out to be a North Atlantic Right Whale!  This species is quite rare, but migrates offshore of Cape Hatteras each winter.  The last time we had seen one on our winter trips was in 2008 so this was quite awesome!  This individual surfaced a few times and fluked twice while we were observing it!  Definitely the "bird of the day" for me and an excellent ending to our winter trips from Hatteras for 2016...(photo by Ned Brinkley) 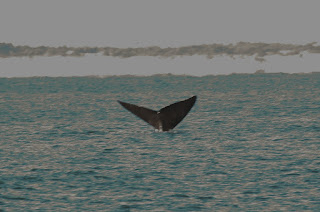 Thanks again to everyone who joined us offshore this winter & thank you to Ned Brinkley for helping us lead this trip.  A big thank you to Middleton Evans & Mark Vukovich for allowing us to use their photos in the blog post!  It was a gorgeous day offshore! 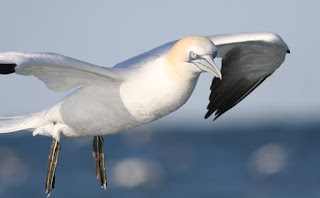 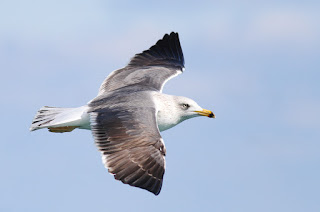 & some more photos courtesy of Middleton Evans (thank you!!) below:

Excellent takes on our "squadron" that followed us for most of the day! 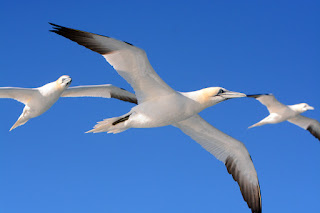 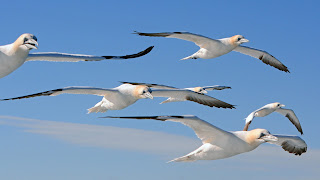 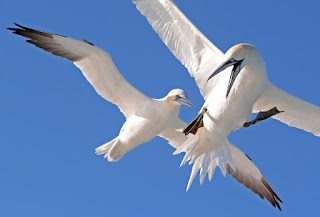 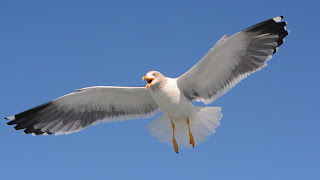 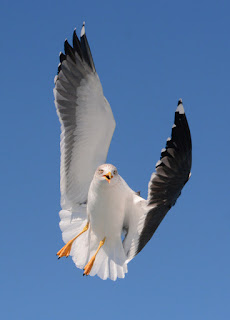 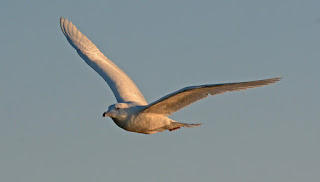 We didn't see many Brown Pelicans, this one was quite photogenic 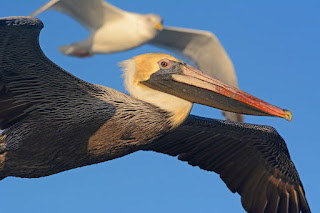 Humpback Whale off of the tri-villages 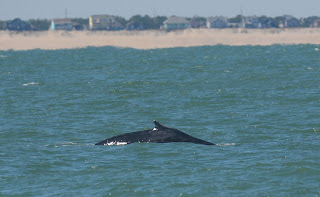 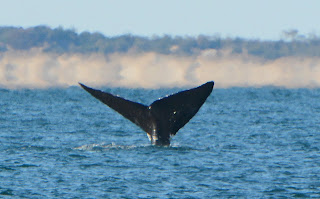 Posted by Kate Sutherland at 7:31 AM