After almost 70 nautical miles running out to the shelf break from Virginia for the last couple of weekends, it was a refreshing change to be back home in Hatteras, where the break is less than 25 miles out.  The short run here means we can run a lot of trips that would be impossible up north.  If we have to cut our cruising speed for a drier and more comfortable ride, it really doesn't matter much in Hatteras.  We might be a few minutes late getting out - not an hour or two.  We had a brisk north wind for the ride out, but it wasn't terribly rough, even when we reached the blue water, which was only about 15 miles from the inlet.  The first tubenose we saw was a Black-capped Petrel (photo below by Kate Sutherland) less than 16 miles out and we soon saw several more so we slowed down and started chumming. 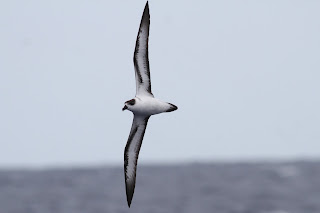 We generally don't see any Black-capped Petrels until we get 25 or more miles out, so to see them on the shelf was exceptional.  But we had exceptional conditions.  The Gulf Stream had split and left a long tendril of pretty 85 degree water inshore.  As we worked offshore, we eventually passed through a band of cooler water - about 83 degrees Fahrenheit - before the water started warming again and getting rough about three miles past the shelf break.  We actually found more Black-capped Petrels - about 40 of them - shoreward of the break than we did offshore.  There were also a few dozen Cory's Shearwaters (photo by Kate Sutherland), 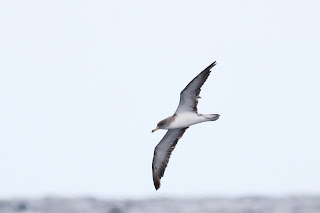 a couple of Great Shearwaters, and several Audubon's.  North wind is not very good for seeing Audubon's Shearwaters and tropical terns here, but we did have nice looks at an adult Sooty Tern and its begging youngster in an area of good seabird concentration.  There were very few storm-petrels to be found near the shelf break.  Perhaps there were more out in the deep, but it did not seem worth the beating to find out.  I was hoping for a little action at the north side of the eddy but we saw few birds there except for a handful of shearwaters.  There was a nice color change but it did not produce the hoped for phalaropes or Bridled Tern.  We did find a nice little group of Atlantic Spotted Dolphins there (photo by Kate Sutherland), however, 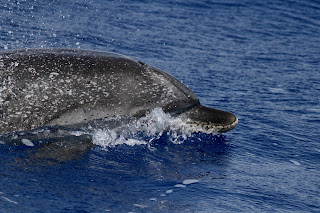 and because it was in less than 30 fathoms, we had just an 18 mile ride back to the inlet.  It was a great day to be out.  We had a lot of folks on the boat who had not been out on a Hatteras trip before and our star seabird, the Black-capped Petrel, put on a great show.  We ended up with almost 75 Black-caps for the day and some of the closest looks you ever get (photo by Kate Sutherland). 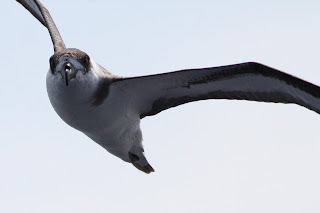 I would like to thank everyone from the Waterbird Society who came along and also those who helped arrange the trip but could not come.  Our charter trip followed the 40th annual meeting of the group!  Thanks also, of course, to Kate Sutherland for working the deck and making sure everything went as it should, all the while chumming, spotting birds, answering questions, and taking photos for this report!

A shot showing the sea conditions and a Black-capped Petrel showing the diagnostic white rump patch easily visible at a distance. 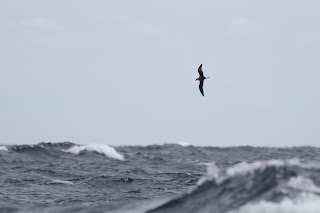 A couple of Black-cappeds in the slick - we had up to at least eight following at a time! 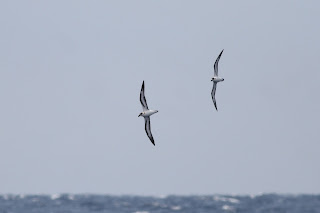 A Black-capped coming in to the chum 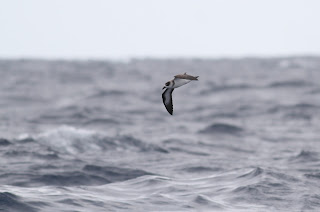 A dark individual - note the extensive dark in the underwing.  This individual had some interesting dark spots on the some of the underwing feathers near the body (compare with the individual pictured below it).  This bird also has a very dark face and smudgy neck collar, not white. 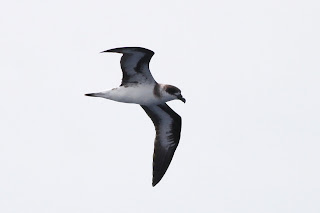 In contrast to the bird above, this individual is a lighter bird.  Note how much white is in the underwing and also the white above the eye, nice black cap, and white collar. 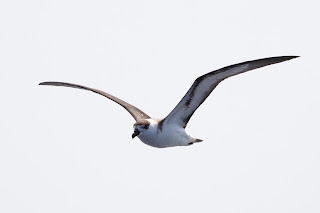 The Atlantic Spotted Dolphins had a few young individuals with them too! 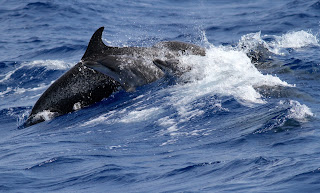 & the edge of the Gulf Stream on our way back in the afternoon - there was a nice temperature break and noticeable color change! 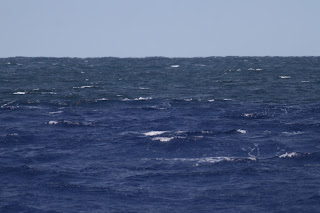 Posted by Kate Sutherland at 12:18 AM