Yesterday we ran our first summer Virginia trip since 2006.  We left just after 0400 because it's a long way out to the shelf break there - 65 nautical miles from Cape Henry!  There was not much to see in the shelf waters except for a few flocks of phalaropes and a quick fly-by Long-tailed Jaeger.  A Leatherback Turtle was seen close to the boat, but briefly.
Out past the shelf break there was some activity - a few Cory's Shearwaters and Wilson's Storm-Petrels along with a couple of pods of Short-finned Pilot Whales.  Very soon after arriving we also found three Long-tailed Jaegers flying together and landing on the water for good views (photo by Kate Sutherland). 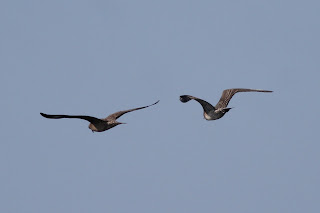 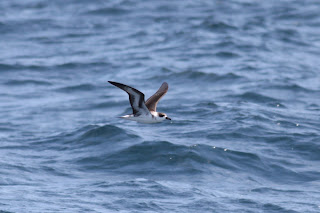 We spent a while chumming past 500 fathoms with little to show for it, so I decided to head back inshore a couple of miles.  We had our best luck between 100 and 500 fathoms. There we found a scattering of Cory's Shearwaters and a single Great Shearwater.  Black-capped Petrel - which teased us earlier - showed well and we saw at least three more individuals which visited our slick.  Storm-petrels remained scarce and all that we saw were Wilson's.
The non-avian marine life was represented by several groups of Pilot Whales, some Ocean Sunfish, and a small group of Risso's Dolphins.  We also watched a White Marlin cruising at the surface of the water.  Increasing winds from the south and a forecast for that to continue kept us from getting as far north as the Norfolk Canyon and we started heading back to shore in the early afternoon.  Choppy seas and spray made it difficult to bird at cruising speed but we did get good looks at a couple of Loggerhead Turtles and we added Audubon's Shearwater to the day's list.  In some years we have found good numbers of Audubon's on these Virginia trips, but there was no Sargassum out there this time and that is important for them and for Bridled Tern, which we did not see.
It was a long day, but I feel like we made the best of a day with less than ideal sea conditions and sparse bird life.  It was good to see some marine life that is seldom found off Hatteras during the summer, such as Pilot Whales, Risso's Dolphins, and Sunfish.  Kate Sutherland, Ned Brinkley, Todd Day, and Ellison Orcutt did a superb job spotting, leading and chumming and I would like to thank all of our enthusiastic participants for making it possible to explore the waters off Virginia once again.  My first pelagic trips in 1986 were off Maryland and Virginia, so it's a homecoming of sorts.  Thanks also to Captain Kevin Seldon of Dockside Restaurant for providing dockage and parking for our trips here.

Sunrise off of Virginia Beach - over 2 hours after leaving the dock! 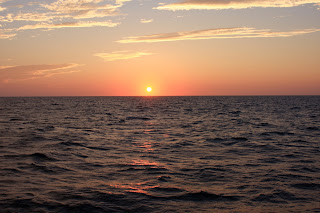 A couple of Black-capped Petrel photos: 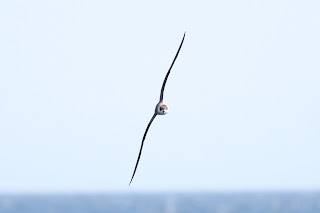 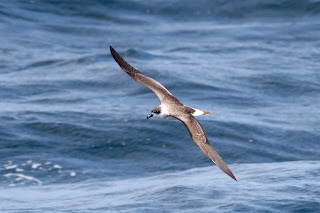 One of the Cory's we saw looked like a good candidate for a nominate individual! 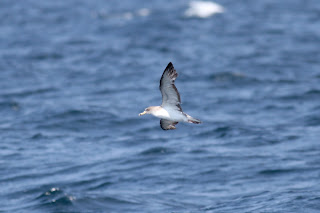 A couple more photos of the Long-tailed Jaegers: 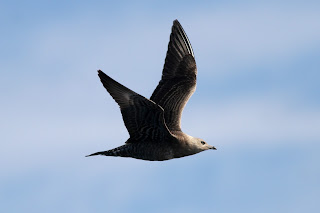 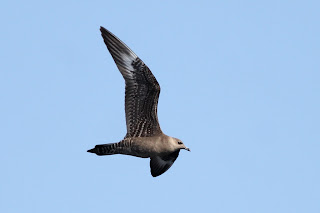 It was a little choppy to take photos of the Molas...! 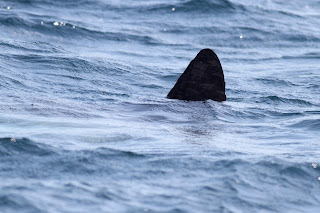