It was nice to have some clouds today as we headed offshore; it makes it easier to scan all around the boat and it increases the chances that our participants spot birds on the way out (sunrise by Kate Sutherland). 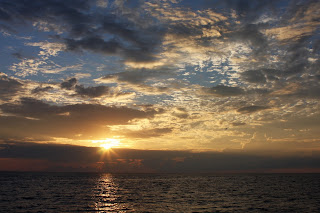 We had been seeing a few birds in shelf waters for the last couple of days, so we were looking pretty hard this morning. It paid off in about 100 feet of water with great looks at an adult and a juvenile Sooty Tern- a species that we had not seen well yesterday (photo by Chris Sloan). 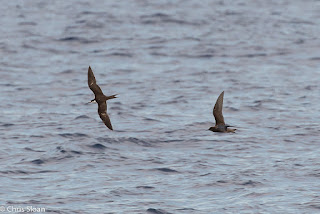 There were also a lot of shearwaters moving- mostly Cory’s, but we did get better looks at Audubon’s this morning than we had yesterday. After pounding the shallows yesterday morning without much to show for it, I decided to keep running past the shelf break today. There wasn’t much going on, but around 0850, I noticed one of our participants, Tim Lucas, looking at something off the starboard side. I glanced that way and immediately saw what got his attention. It was a White-faced Storm-Petrel flying and hopping by at point blank range (photo by Kate Sutherland). 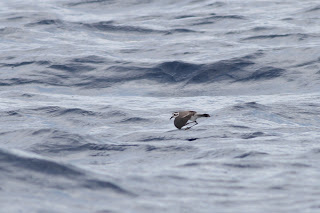 Within seconds, everyone aboard was on it and I kept it close for a few minutes before the choppy seas and an oncoming ship caused me to abort the mission. It had been a few years since I had chased one these bouncing little birds around with the boat. They are not all that fast, but they can turn on a dime, and when it’s choppy they can be tough act to follow. White-faced Storm-Petrel is an annual visitor the Western North Atlantic, but it is not a bird that we see every summer off Hatteras. They are more frequently found farther east - especially along the shelf break south of New England.  The last time we saw one here was in 2009 and that was not a close look.  So it was great to have one today that everyone was able to see well and have a chance to photograph. I hope that we are able to find some more off the VA Capes on our trips next month. Kate was just back fresh from seeing some at Hydrographer Canyon, but it has been almost two years for me. It’s a really neat bird and I wish that we were able to see them more often down south, but it’s a fluke to find them in the hot water and fast current.


After we left the White-faced, we headed out to the deep, where we scrapped out a few species that had eluded us yesterday, such as Great Shearwater and Band-rumped Storm-Petrel (photo by Chris Sloan). 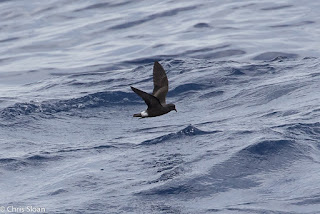 A Long-tailed Jaeger gave us another species for the weekend. I was hoping to find a tropicbird or some other rarity out there, but it did not happen, which was fine because we had already had the incredible fortune to cross paths with the endearing little kangaroo petrel. I would like to thank everyone who came this weekend- especially those who did two or three trips. Your persistence paid off. Also a big thanks to our leaders: Kate Sutherland, Chris Sloan, Kyle Kittelberger, and Chloe Walker.  It’s always nice when some or most of the leaders get a lifer!

Black-capped Petrels were in their element today, wind!  We had some nice view of these birds close by and also studied their diagnostic flight in the distance (photos by Chris Sloan) 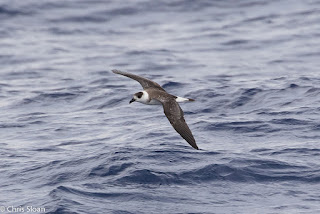 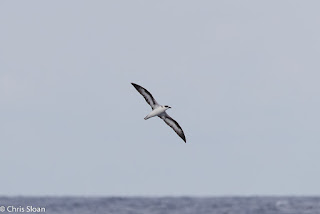 While we were unable to find a Great Shearwater yesterday, today we had some close individuals! (Chris Sloan) 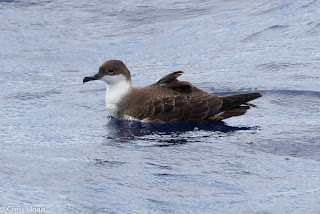 This Audubon's flew right in to the boat! (Chris Sloan) 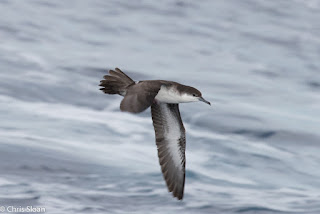 Another photo of the White-faced Storm-Petrel! (Kate Sutherland) 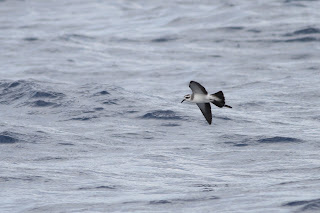 It was nice to see some Band-rumpeds on the last trip of the summer from Hatteras! (Chris Sloan) 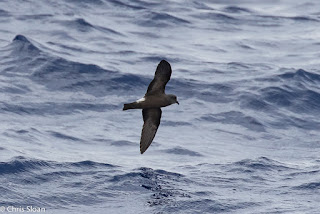 This Long-tailed Jaeger flew right up the slick, but did not pause as it passed us by! (Chris Sloan) 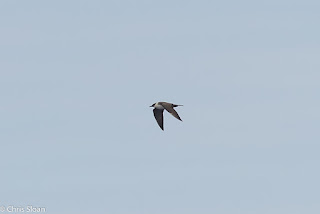