Friday August 26, 2016 A Tale of Two Tropicbirds - by Kate Sutherland 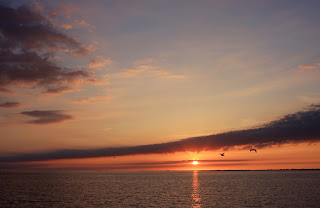 It has been a couple of weeks since we ran a trip down here and with the cold front that moved through earlier this week, our hopes were high for an awesome summer trip!  We were not disappointed! (sunrise above by Kate Sutherland)  Black Terns are on the move and we had some really nice views of them around the inlet and then a bit farther offshore (photo by Chris Sloan). 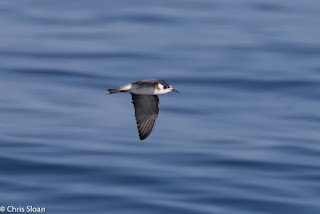 The winds were light from the south for most of the day and we had some clouds, the weather seemed like a footnote, shadowed by all of the life we found out there!  And a lot of it was on the shelf, something we have not really encountered yet this year.  We slowed a few times before we even reached the shelf break for tropical terns and shearwaters, getting nice views of Sooty and Bridled Terns (photo by Chris Sloan) before 0900! 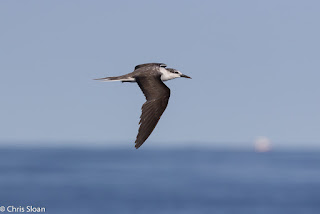 These birds were feeding over some small tunas - it was reported that the fishing boats nearby were landing small Blackfin and Skipjack Tuna, so these were likely the fish we saw leaping out of the water inshore today (to the delight of the shearwaters and terns!).  Cory's, Great, and Audubon's Shearwaters all made some nice passes by the boat around the shelf break so that our participants could become familiar with them, then the first Black-capped Petrels (photo by Chris Sloan) began to appear as we moved into some deeper water - 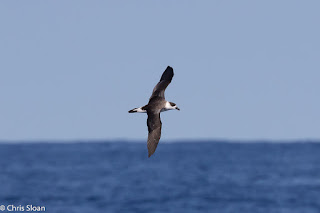 with them the first Band-rumped of the day was seen on the water with some shearwaters, but it flew directly away for a less than stellar view.  Wilson's Storm-Petrels began to slowly gather in the slick, and while their numbers start to dwindle this time of year, we still had a few and ended up with some nice views!  Brian shouted "What's this?!  A tropicbird!!!" right around 1110 and sure enough, a White-tailed Tropicbird flew right in front of the wheelhouse and down the starboard side!  Thank goodness it made a few more passes once everyone was situated! (photo by Chris Sloan) 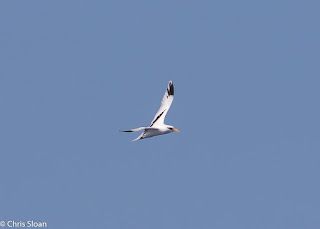 Not even forty minutes later Chloe Walker shouted "Right here, on the water!!  Tropicbird!!"  And we were amazed to see a close White-tailed Tropicbird lift off of the sea in the strong sun glare on the port side - while this bird flew directly away, at least everyone again had a chance to see it!  We know that we had two individuals since one had nice long tail feathers and the other did not.  A certain sign of life offshore is tropicbirds!!  The water was gorgeous out there today, and while it was calm, there was just enough breeze to keep us comfortable without too much chop.  We did finally have some nice passes by a Band-rumped Storm-Petrel (photo by Chris Sloan) in the stern, rounding out the good looks at our usual Gulf Stream suspects! 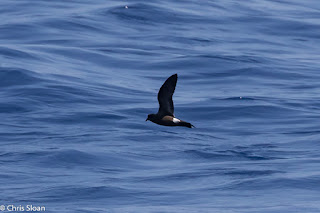 With calm seas comes the ability to see birds on the water in addition to cetaceans and turtles. Black-capped Petrels on the water allowed us to closely approach them more than once today, and we found two Leatherback Turtles out there! (photo by Kate Sutherland) 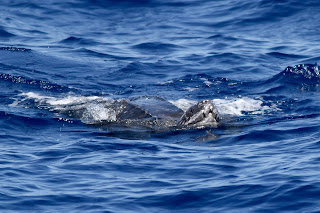 Near the shelf break we had a small pod of curious offshore Bottlenose Dolphins come in to check us out, they were very vocal and spent quite a bit of time riding our bow wave.  Closer inshore we had three encounters with Atlantic Spotted Dolphins that also came in quite well to the boat.  Overall, it was another amazing summer day in the Gulf Stream - life abounded and really put on a show.  The flyingfish were captivating for most of the day - giving excellent opportunities for photographing them with some awesome reflections on the calm seas.

Thank you to everyone who joined us today, we had a full boat, and a big thank you to our leaders: Chris Sloan, Kyle Kittelberger, and Chloe Walker who all did an outstanding job helping to spot, identify, and get people on the birds we saw today!  Thank you also to Chris for supplying photos for the blog post today!

Black-capped Petrel (Chris Sloan) - most of the birds we saw today were dark-faced individuals or intermediate, like this bird. 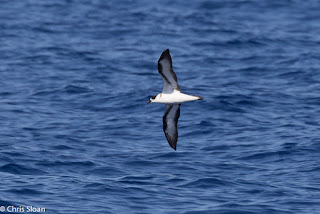 It was nice to have all three shearwaters sitting with Black-capped Petrels! (Chris Sloan) 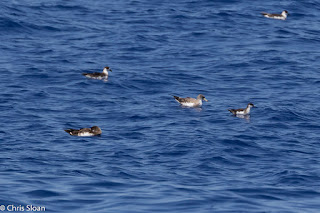 Great Shearwaters taking off, here you can see the mottled underwing of the species. (Chris Sloan) 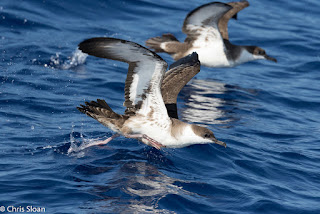 Audubon's Shearwaters were around today and a few made some nice passes! (Chris Sloan) 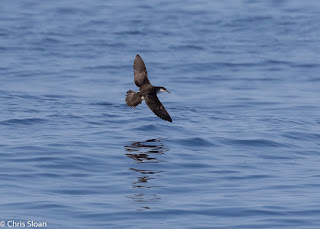 One group of Spotted Dolphins seemed to be telling us to buzz off! (Kate Sutherland) 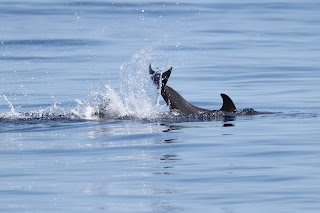 The ocean was gorgeous today, as illustrated in this photo of some Atlantic Spotted Dolphins. (Kate Sutherland) 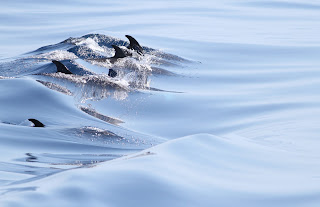 A couple of flyingfish photos by Chris Sloan: 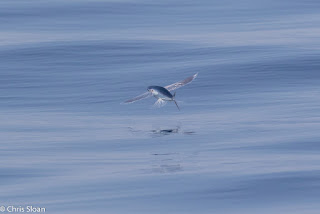 These both look like they fall into the Atlantic Patchwing group. 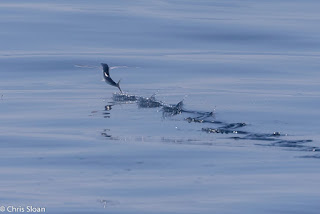