Since we were weathered out last Saturday, it was nice to get back offshore today - the morning dawned with more wind than was forecast making all of us very optimistic as we headed offshore!  (sunrise by Kate Sutherland) 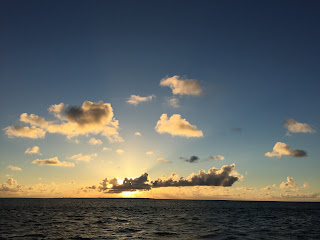 We slowed down about 30 minutes inshore of the shelf break since there was a fair sign of birds and we didn't want to miss anything charging past the edge of the Gulf Stream.  The shearwaters and storm-petrels we saw in there were mostly distant save for a Pomarine Jaeger that flew up the slick, past the boat, and then kept on going.  Black-capped Petrels began showing just over the break (photo by Lucas Bobay), 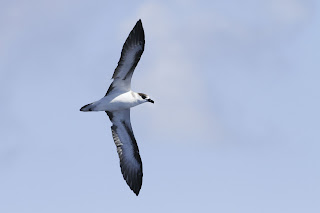 a little shallower than we sometimes find them, but as the day progressed, we realized that most of the birds today were in that swath of water - not out in the deep (we know because we checked!).  I was very pleased to see that the Black-cappeds were hungry, even with a fairly bright moon out there, and some of them followed us for over an hour dropping down and feeding in the slick!!  We passed a couple of flocks sitting on the water and were able to recruit a few to the slick.  Bird of the Day?  Easily Black-capped Petrel for me!  Wilson's Storm-Petrels, while a bit sparse and distant to begin the day, soon were flying right up to the stern and for a few people, these little superheroes from the bottom of the world were the Bird of the Day!  Cory's & Great Shearwaters also gave us some stellar views in flight and on the water - with Black-cappeds - not a comparison that we see every day (photo by Kate Sutherland). 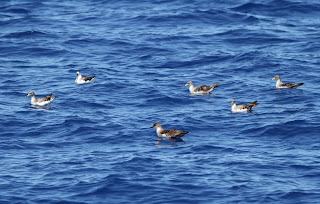 Band-rumped Storm-Petrels finally made an appearance and also gave us some close views along with the usual study more distant in the slick.  One of these came to feed right next to the boat (photo by Kate Sutherland), 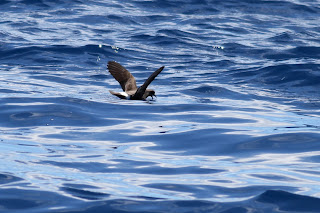 prompting a long time participant to remark that it was the best he had ever seen a Band-rumped - easily the Bird of the Day for others aboard!  Late morning found us in the neighborhood of the canyon dwelling Gervais' Beaked Whales - and sure enough, we encountered a small pod of females and possibly young individuals!(photo by Lucas Bobay) 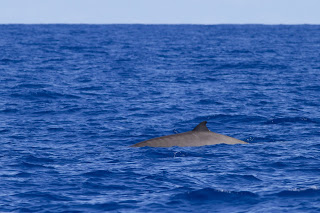 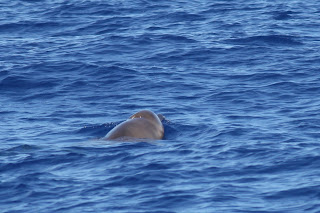 One thing that was noticeably absent out there today was the sargassum.  We passed some small patches of it, but nothing like what we usually find here in the summer.  So with that, we were also missing the species that are associated with this type of floating brown algae, the Audubon's Shearwaters and Bridled Terns!  We saw only three Audubon's offshore of the shelf break today - pretty disappointing for an August pelagic trip from Hatteras!  And without some perches for the Bridled Tern...well, my hopes were not very high for an encounter.  Then, on the way in we found a float with...yes!!  A Bridled Tern!  And around it, some sargassum and Audubon's Shearwaters!!  We took a few minutes to approach and photograph this individual (photo by Lucas Bobay) 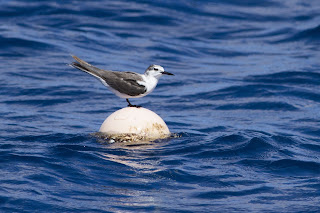 that for many aboard, was the Bird of the Day!  Who knows what it will be tomorrow - a tropicbird?  Perhaps a booby?  Maybe even a mega like Black-bellied Storm-Petrel...either way, we'll be there and keep you posted!

Thanks to everyone who joined us today and a big thank you to our leaders, Jeff Lemons, Ed Corey, and Lucas Bobay who did an excellent job helping everyone get on the birds!  Thanks also to Lucas for letting me use some of his photos here. 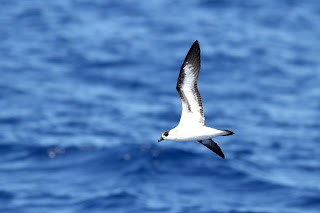 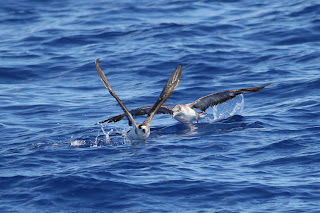 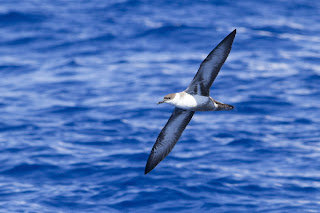 One of the Audubon's Shearwaters nearshore (Kate Sutherland) 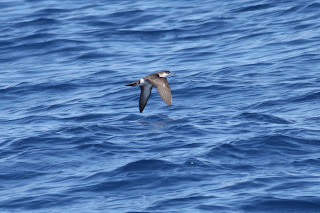 Band-rumped Storm Petrels (left three) Wilson's Storm-Petrel & Black-capped Petrel, it was nice to see these birds together on the water and then taking off!  (Kate Sutherland) 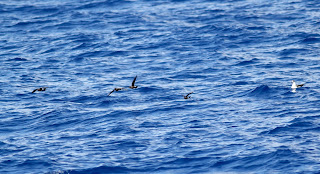 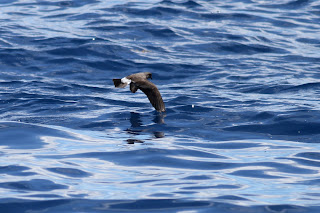 A couple more images of the Bridled Tern (Kate Sutherland) 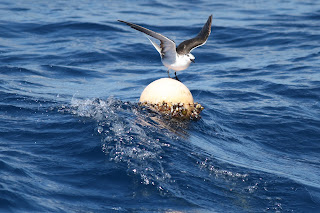 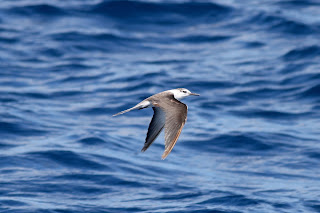 & one more Gervais' Beaked Whale photo - here you can see the "tiger" stripes that are typically seen on the female individuals.  There is also a scar behind the dorsal fin on this individual, the scar is dark vs light or white which is characteristic of this species as well.  (Kate Sutherland) 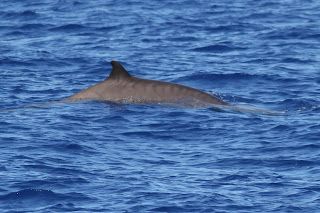 Posted by Kate Sutherland at 10:32 PM