Saturday August 27, 2016 What a Difference a Day Makes - by Kate Sutherland

The wind shifted a bit from yesterday so we had northerly winds this morning coming around to the north east by afternoon.  The skies were mostly clear, and it was a calm day out there even with a breeze against the current!  The water was a far cry from what we had yesterday, though, and offshore of the shelf break it was a little blended, not quite the same lively beautiful blue Gulf Stream water.  There was some current out there and we found Black-capped Petrels (juvenile bird pictured), 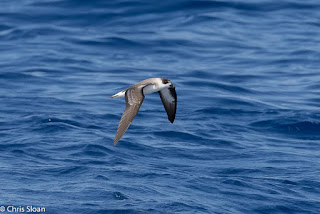 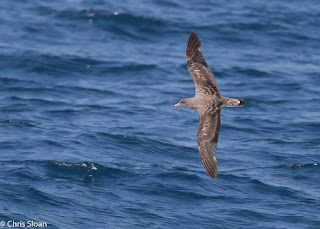 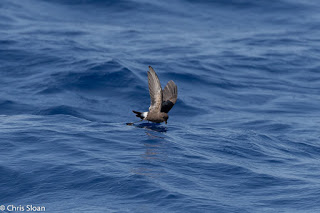 our main birds of the day (all photos by Chris Sloan) - with excellent views of each! Bridled Terns were inshore again today so we had some nice passes this morning and then seven individuals this afternoon, including one begging juvenile bird that perched on a piece of flotsam for examination and photos.  Three Sooty Terns were over some fish offshore but we had to work into the current to approach them and while we were unsuccessful in getting close, they were identifiable!  A hammerhead shark swam by the boat and into the chum slick as we approached the shelf break this afternoon 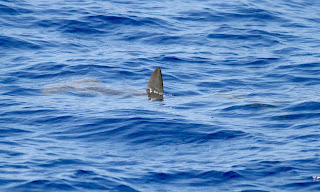 and we had a small pod of Bottlenose Dolphins come in to check us out in that same area (photos by Kate Sutherland). 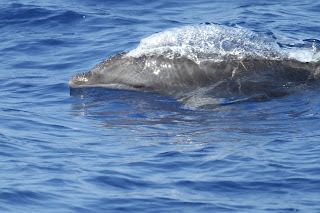 Once we were back on the shelf, a participant spotted some phalaropes on the water. They sat patiently for us to get close enough for everyone to have a nice look at these petite birds and identify them as Red-necked Phalaropes (photo by Chris Sloan). 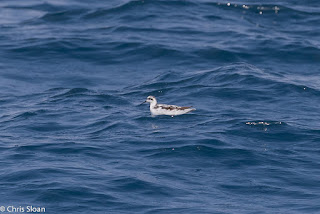 Shortly after we picked up to run back to the inlet, Kyle Kittelberger spotted a couple of Bridled Terns flying near some fishing boats and just below them was a huge Loggerhead Turtle on the surface!  It also was patient and most everyone aboard was able to catch a glimpse of the second species of sea turtle for this set of trips (photo by Chris Sloan). 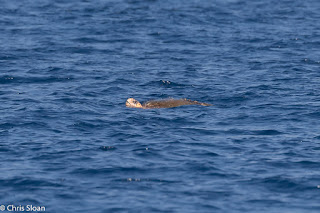 While I had high hopes that we would find something different and perhaps rare today, it did not pan out.  What we did have was another amazing day in the Gulf Stream, just a reminder that some days being out there and getting good looks at our usual suspects is enough!

Thank you to everyone who joined us, we were close to full today, and thank you to our leaders: Chris Sloan, Kyle Kittelberger, and Chloe Walker.  They all did a spectacular job and Chris supplied most of the photos for the post today!

Summer usually brings us good numbers of Cory's Shearwaters so we are always looking for candidates for the nominate Cory's, or Scopoli's.  This bird has some white in the underprimaries, but falls more into the intermediate category.  (Chris Sloan) 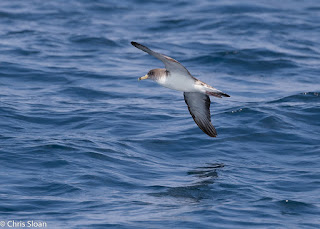 This bird was closer to the nominate type - while not extremely clear in this photo, this bird was well marked on its underprimaries (Kate Sutherland) 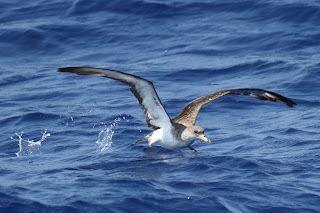 It was nice to see so many Cory's on the water! (Chris Sloan) 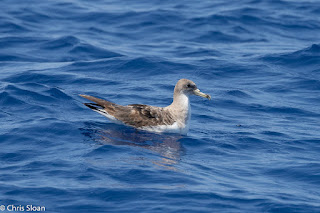 One of the perched Bridled Terns from the day (Chris Sloan) 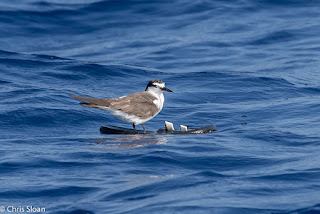 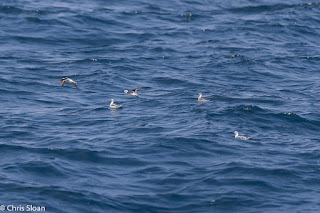