Light southeast winds and a little bit of swell from overnight greeted us as we traversed the sandbar at Hatteras Inlet, oh, and another gorgeous sunrise (photo by Kate Sutherland)! 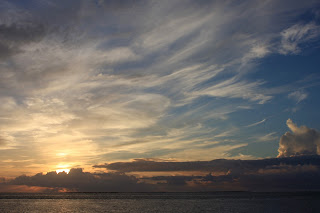 As has been the case on our trips so far this summer, we did not see many birds on our way to the shelf break, but once we slowed down and began chumming we had incredibly close Audubon's Shearwaters (photo by Peter Flood) - they were mostly this year's birds - 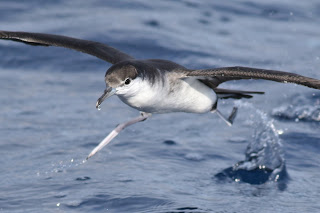 and nice views of some Cory's & Greats a little more distant.  Our first Black-capped Petrel made an appearance before we even had a good look at a Wilson's Storm-Petrel, and the day was off to an excellent start!  It was just calm enough for birds to be sitting around on the water and for us to spot them with ease...but there was also just enough breeze and cloud cover that the day was not too hot.  We encountered flocks of shearwaters and Black-cappeds on the water (photo of Black-cappeds taking off by Peter Flood), 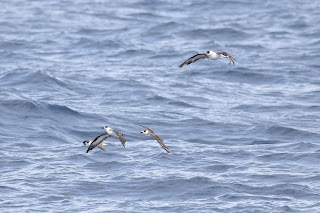 mostly in the morning on our way to the deep.  Band-rumped Storm-Petrels were very obliging and our first individual flew in to the back of the slick right around 1000 working its way up towards the boat for a quick view.  The next couple of individuals stuck around much longer (photo by Peter Flood) 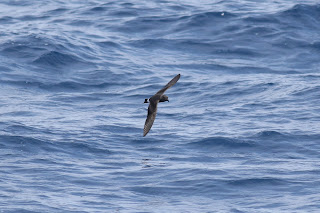 and by the end of the day we had two to four Band-rumpeds with us at all times, even as we approached the shelf break!  It seems the shearwaters are back and we had excellent numbers of Cory's Shearwaters plus at least three individuals that looked like the nominate type, also known as Scopoli's.  These birds stayed with us feeding in the slick alongside Great Shearwaters (photo by Peter Flood) 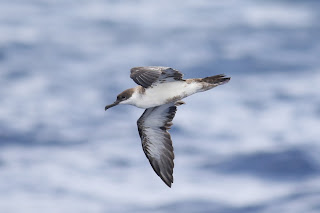 and Black-capped Petrels who all were following us with our ever present Wilson's Storm-Petrels for much of the day.  Our surprise visitor flew in just after 1230 though, a very curious South Polar Skua!  (photo Peter Flood) 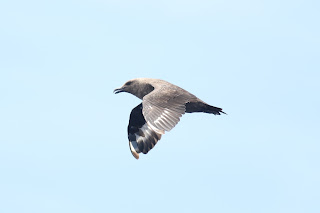 This seemingly enormous bird came right in and hovered over the stern of the boat, checking us out as we all craned to see it overhead!  It made a few more passes before flying away down the slick.  The Gulf Stream was variable in appearance with some dirtier looking water inshore, then clean, cerulean water offshore - with scattered sargassum.  While we thought it might be the perfect day for a tropicbird, none appeared, and the conditions were not favorable for any tropical terns.  Overall it was a perfect summer trip with excellent views of everything we saw over the course of the day, and good numbers of all species!  Thank you to everyone who joined us out there today and also thanks to Peter Flood for helping us lead the trip and for contributing photos for the post today!!

All photos below courtesy of Peter Flood
We had one young Black-capped Petrel come in to the boat!  Here are a couple of images of this gorgeous and sharp looking bird! 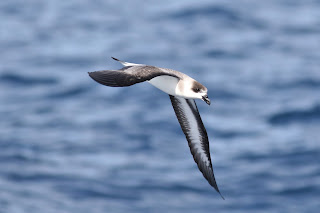 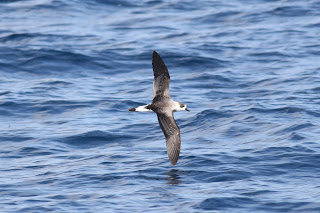 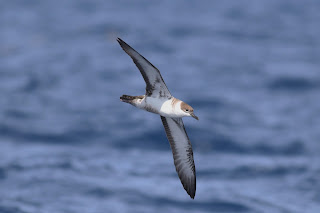 And it would be difficult to resist more photos of the young Audubon's Shearwaters! 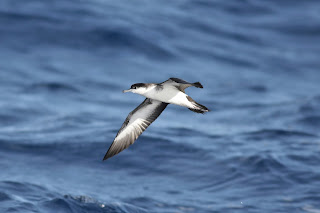 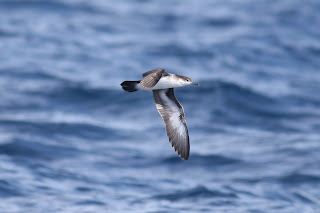 Band-rumped Storm-Petrel with a morsel of food 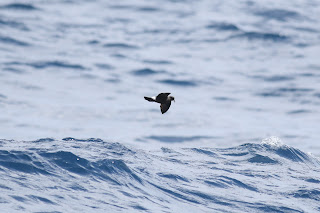 Atlantic Spotted Dolphins from this morning 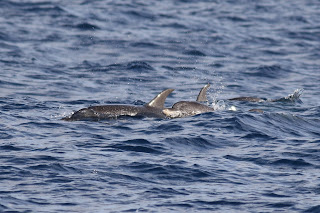 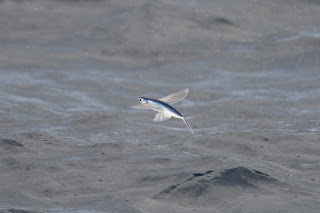