This morning dawned much calmer than yesterday and as we headed offshore there was ample cloud cover to keep us cool instead of wind (sunrise photo by Kate Sutherland)! 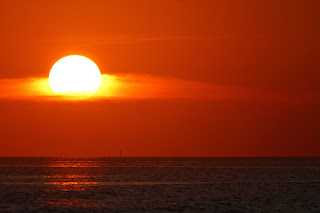 A pod of curious Atlantic Spotted Dolphins came in to the boat to ride the bow wave on our way offshore and we had awesome views of these small, energetic marine mammals!  When we reached the shelf break, we were greeted by shearwaters...unlike yesterday when it took some time to find them.  Right off the bat we had awesome looks at a pair of Audubon's that one of our participants spotted sitting on the water, so we slowed there and headed offshore (photo of one of these Audubon's in flight by Kate Sutherland). 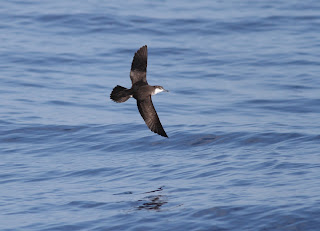 We found Cory's and Audubon's Shearwaters to be quite cooperative on the water and even encountered our first Wilson's Storm-Petrels in a flock taking off in front of the boat (as opposed to in the slick!).  As we reached deeper water, Black-capped Petrels and Band-rumped Storm-Petrels put in an appearance!  A flock of fourteen Black-cappeds, two Audubon's, and three Wilson's on the water sat calmly for us to approach - a rare close encounter with sitting Black-cappeds!  (photo of a couple taking off by Brian Patteson) 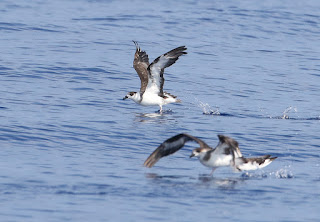 Sooty and Bridled Terns were not around like they were yesterday in spite of some nice sargassum (with life!) offshore, but we did have one Sooty Tern that flew right over the boat, so at least everyone aboard had a nice quick view.  Cory's Shearwaters were more plentiful than on yesterday's trip and we had some excellent passes, but we were unable to turn up a Great Shearwater for the second day in a row.  Squalls in the distance kept us cool this afternoon and also brought us some wind;  it was nice for our participants to get to see the birds really showing off their ability to harness it!  Black-cappeds and Band-rumpeds, even the Wilson's, were transformed.  It is amazing the difference a day makes and we were quite pleased to find today to be more of a "summer" trip with the lines of sargassum and flyingfish (photo by Kate Sutherland) to keep us company out in the deep. 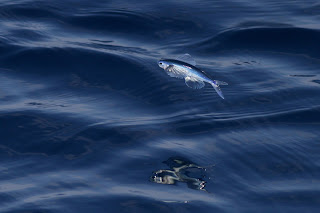 Everyone had a chance to see our usual suspects and see them well - another excellent adventure in the Gulf Stream!  Thank you to everyone who joined us out there today - we have space on our trips next weekend, Friday August 5 & Saturday August 6th! 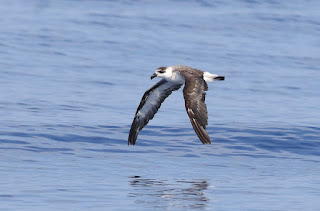 We spent some time with the Wilson's Storm-Petrels on a quick drift in the afternoon.  Here you can see the yellow webbing!  (Kate Sutherland) 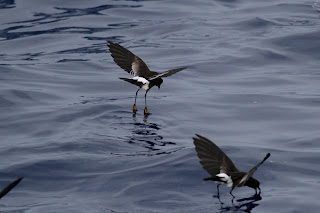 Another nice view of their long legs!  (Kate Sutherland) 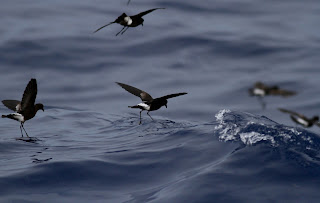 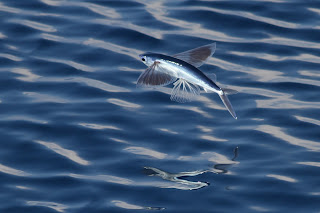 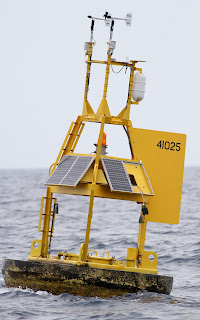 Posted by Kate Sutherland at 9:49 PM