Summer...now it feels a little more like it with our first tropicbird of the season under our belts!  There was still some wind holding on this morning from the southwest as we headed offshore.  The Gulf Stream current looked to be swift and close to the shelf, so we headed a little more to the south to compensate.  Like last weekend we didn't see much life on our way out there, but we did see more sargassum than we've been seeing lately, so that was a good sign!  The temperature break was inshore of the shelf today giving us a pretty uniform condition offshore - meaning not much to hold a bird out there!  Our slick worked well in the breeze this morning and around 10 the wind shifted a little to the north, bringing in more Wilson's Storm-Petrels and getting some birds moving!  We had excellent looks at the birds we saw, but the numbers of individuals were really low for this time of year - again, not much out there to hold birds - no schools of skipjack like last weekend and there were not even very many flyingfish in the warm water despite the sargassum!!  Black-capped Petrels & Band-rumped Storm-Petrels ruled today, as they should!  We had excellent looks at Black-cappeds early in the day and the Band-rumpeds were very attentive in the slick, sometimes a glance back there turned up more of these long winged stormies than Wilson's!  It was awesome to have time to observe them like that!  We drifted a few times with the chum and had nice looks at Great Shearwaters feeding, with some Cory's & Audubon's flying by - much less attentive to our buffet.  Brian had a lure he wanted to try out for a tropicbird...and why not?  So we put it back there for awhile to see if we could attract one - and sure enough the shout went out "Tropicbird!!!!" a little after 1:30 this afternoon!  Who knows if this White-tailed was attracted to the lure, but it certainly came in to check it out making a few investigative dives towards it! 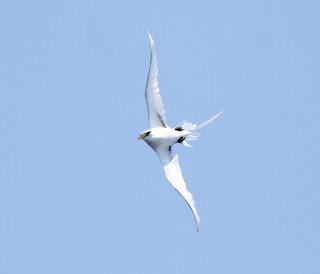 This bird was around for at least 11 minutes, to our delight!  Summer is a good time for White-tailed Tropicbirds and most of the individuals we encounter are nonbreeders (since the breeders are busy in Bermuda right now).  It was a perfect day out there overall, even with the lower numbers, maybe we'll find something different tomorrow.  In the meantime, it feels a little more like summer with a tropicbird on the list...!
A big thank you to Ryan Sanderson for organizing a group of birders from Indiana who are with us for the weekend, and thanks to everyone else who was with us today!  Jeff Lewis was kind enough to help Brian and I lead the trip.  (photos today are by me)

We had a gorgeous fresh white faced Black-capped Petrel (top) visit the slick, quite a contrast to the molting intermediate individual pictured below 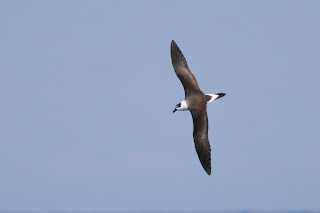 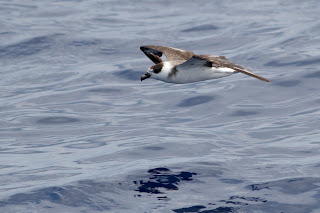 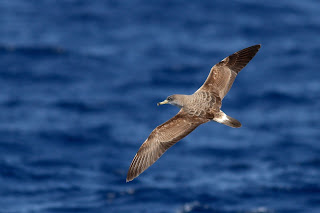 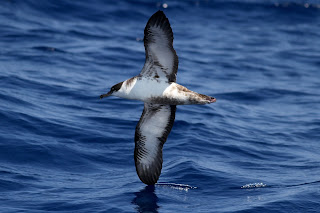 Band-rumped Storm-Petrels - you can really see the short legs in the bottom photo!  Their webbing is black vs yellow on a Wilson's Storm-Petrel. 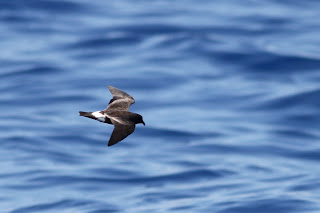 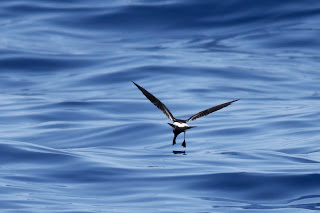 & a few more White-tailed Tropicbird photos!  The light was not perfect, but the bird was extremely cooperative! 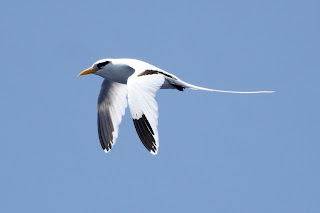 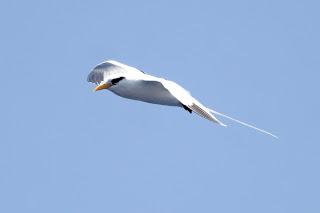 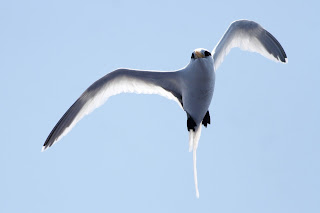 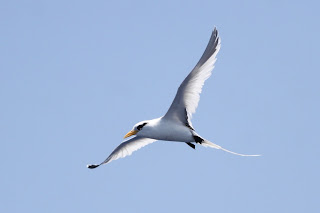