The wind fell out overnight and we headed offshore this morning with light southwest winds (9-10 kts) and some welcome cloud cover!  Like yesterday there was not much to be seen on the way to the shelf break - just some Royal Terns and a Wilson's Storm-Petrel.  Not many birds were flying when we got out there, but shortly after we slowed down and put out some oil a Black-capped Petrel flew by in the distance, working its way in toward the boat.  The calmer conditions allowed us to get out to some deeper water today and that was where most of the birds we saw were found.  Numbers were not as high as yesterday for the Black-cappeds & Band-rumpeds, but we had nice views of both species!  Shearwaters were a little more cooperative today with a gorgeous Great Shearwater flying in to feed a bit in the slick first thing in the morning! 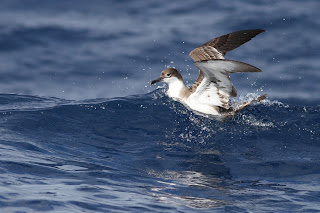 Out in the deep there was some scattered sargassum and there we found a very agreeable Audubon's Shearwater who ignored us as we approached it feeding on the water. 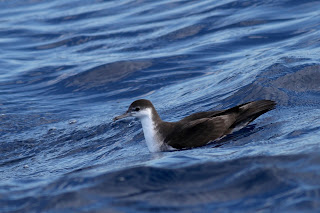 After we passed, it decided that maybe our food was a little easier to procure...so it stayed with us in the slick for awhile feeding with Wilson's and making occasional close flights by the stern.  While no Cory's came in to feed in the slick, we did find a small group of birds on the water that we had nice views of!  This group also held a quick glimpse of a Pomarine Jaeger as it beat up on one of the Cory's and then flew directly away.  The highlight of the day, though, was a White-tailed Tropicbird that spotter Sage Church saw in the clouds distant!  We watched this bird through our binoculars as it shot down towards the water then back up into the clouds thinking that was going to be it as it had not shown any interest in us!  Thankfully we were wrong and the bird flew over to check out our tropicbird lure, 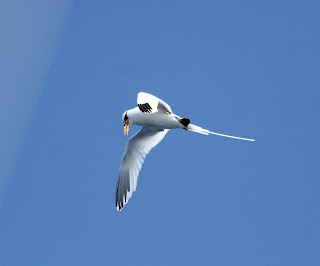 flying down and around the boat for a few minutes!  Spectacular is the only word to describe it and it was a thrilling experience for all aboard (including Brian & myself!!)!  Heading back toward the shelf it was clear that we were very lucky to make it out to the deep today as life was scarce on the inshore tack.  However we did see another jaeger on the way back to the inlet, it looked like a Pom, but was too fast for photos or a nice view, and there was an Audubon's Shearwater just a mile or two off the beach!  Thanks to everyone who joined us today and a big thank you also to Sage Church who helped us spot the birds today!

Another photo of the Audubon's Shearwater that followed us for a bit taking off: 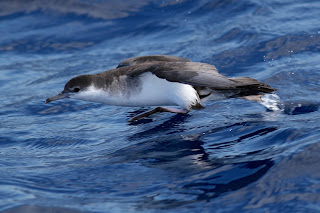 The last Band-rumped Storm-Petrel of the day - they did not come nearly as close to the boat as they did yesterday!  Maybe it was because we didn't have as much wind...or they were not quite as hungry today... 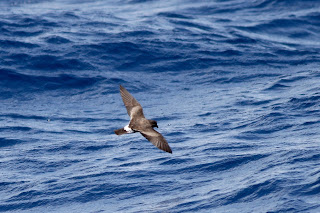 And yes...a few images of the White-tailed Tropicbird!! 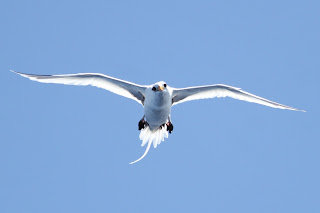 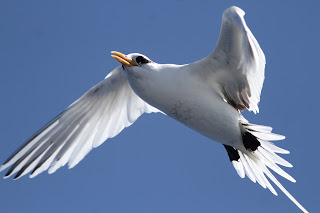 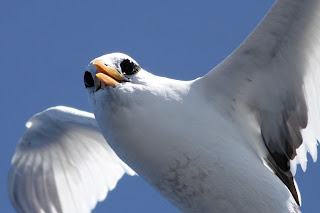 While we were out in the deeper water we had a Royal Tern fly in!  This bird has bands on both legs! 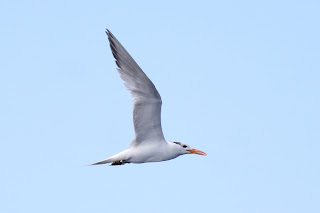