We headed out this morning from Hatteras in a breezy southwest wind, and glad to have it because it has been pretty hot on light wind days, with water temps in the Gulf Stream now up to mid 80s.  I knew from yesterday that the current was going to be ripping on the shelf, so we headed as far south as we could so as not to let it whip us too far up to the east. The current moves in and out, so it’s not always strong in the shelf waters, but today it was. The Gulf Stream is a powerful force of nature and when the current is pushing hard in concert with a brisk southwest wind, it means we need to take some lumps in the morning and work well into it to avoid a slow, tortuous ride home later in the day.  We took our time and the ride down was not too bad. We started chumming at the shelf break and birds were slow to come in. We saw a few Black-capped Petrels starting in about 1000 feet of water. 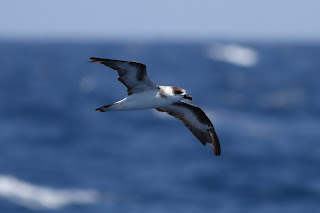 A few Wilson’s Storm-Petrels started to trickle in and we kept heading offshore. I found a little line of Sargassum about 30 miles out in over 300 feet of water and started to follow it. Working slowly into the wind we began to attract some birds and we added Audubon’s Shearwater and both Bridled and Sooty Terns to the day’s list with crippling views of Audubon’s rooting around in the Sargassum oblivious to the boat. 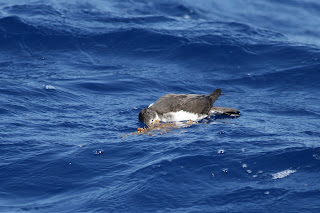 Around 1030 we were still following to line and Kate spotted a European Storm-Petrel behind the boat. I slowed down and glanced back and got a look, but it disappeared before we could get a photo, as she was showing it to the group. Circling back, we soon relocated it and we saw it make a few brief appearances in the slick over the next 15 minutes. 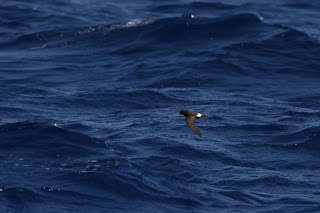 Needless to say this was not what we were expecting to see today, but having seen several over the years, we are pretty tuned into how they fly and the fact that this one was about two months later than most did not matter. Our latest record before today was June 10 - also this year!  We worked the grassline a little longer and got a quick look at a larger storm-petrel, but not much else.  We headed offshore and soon found a Band-rumped Storm-Petrel that came close by. 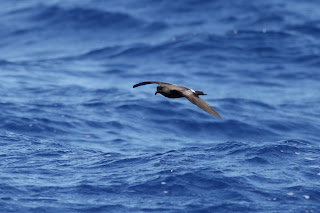 About 32 to 33 miles out we found a lot more Sargassum, but not many seabirds. The inshore tack to the shelf break produced a few more terns, Black-caps and a Cory’s Shearwater. The latter has been remarkably scarce here lately. Cory’s is often the most numerous seabird here in July and August and we saw a grand total of four today, which is an all time low for us in summer. Black-capped Petrels, however, put on a great show feeding on our chum all the way in to the shelf break. 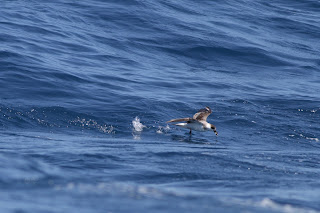 Inshore, the wind was a bit less and we had a pretty nice ride back to Hatteras Inlet. I would like to thank Kate Sutherland for leading the trip and all of our participants who were brave enough to leave their climate controlled homes and head to sea with us.  (all photos today by Kate Sutherland)

**A couple more photos of the Euro**
Unfortunately, they are not perfect as we did not really have much time to capture this little guy - but they are all we need to record the first European Storm-Petrel to be found here in the summer!! 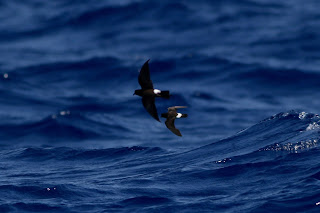 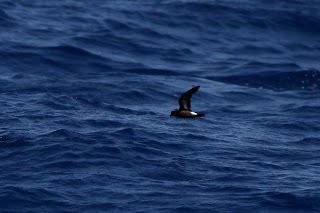 This Black-capped Petrel from the end of the day had an interesting head pattern - not sure if it is just some feathers out of place or if it actually had an odd white feather... 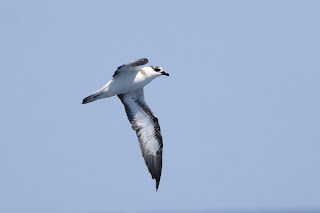 The same Audubon's Shearwater as pictured above 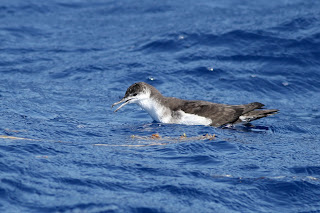 Another view of the Band-rumped Storm-Petrel showing the dorsal & tail, note no feet extending beyond the tail as is seen in Wilson's Storm-Petrel 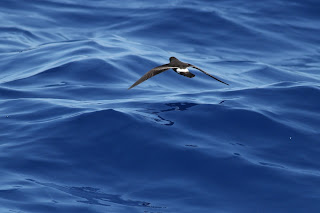 & a couple of the Bridled Terns we saw today - they were all in tough light... 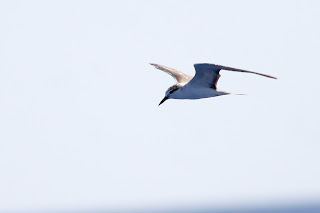 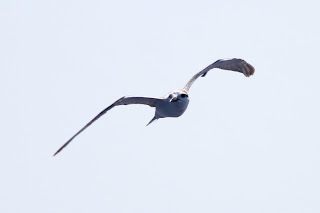